Set on a rapidly gentrifying yet still gritty stretch of Bushwick, Brooklyn, House of Yes presents itself as a raw, old-skool warehouse – albeit one with a gigantic YES painted along its facade. Inside, it’s a different story. Combining a slightly ramshackle, let’s-make-a-club aesthetic with neo-circus-style shock and awe, the mid-size venue is part DIY dress-up, part glitzy Vegas excess. On an average night, you might find face-painted dancers dodging for spandex-sporting stilt-walkers, while aerialists cavort overhead and hula-hoopers twirl to the side. In short, it’s not exactly a natural fit for a guy like Matt Edwards.

Edwards, 42, has produced a kaleidoscopic range of electronic music over his long career, but he’s most associated with the propulsive, muscular, inventive and often brilliant house and techno that he creates as Radio Slave (among his numerous alternate monikers are the more overtly funkified/discofied Rekid and, with partner Joel Martin, the sampledelic-exotica project Quiet Village). It’s fine-tuned, precision-made music, equal parts efficient and sublime, that’s garnered him accolades from fans and peers alike. But he’s also one of the most low-key DJs on the international circuit. Generally clad in black cap, nondescript T-shirt and dark jeans, he has a rep for being one of the most down-to-earth guys within a scene teaming with oddballs and hustlers. 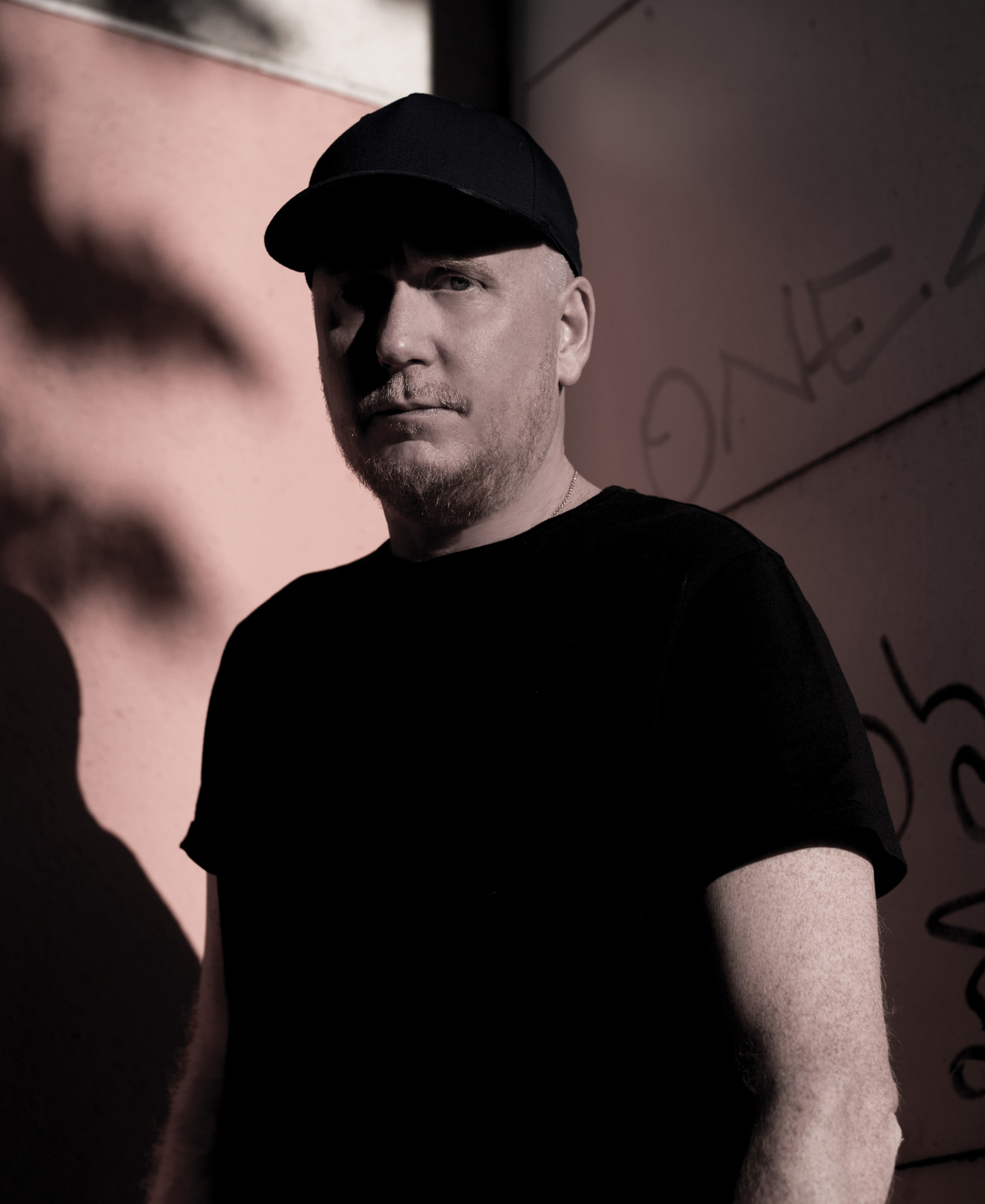 He’s in town to kick off a short run of North American gigs, a mini-tour to tease the imminent release of a new Radio Slave album called ‘Feel The Same’, out on his own Rekids label. Being more of an “all about the music” kind of DJ, the club has wisely kept the bells and whistles to a minimum, the trapezes in storage, the glitter left on the shelf. The place isn’t packed (it’s late on a school night, after all), but Edwards gives it his all, cycling through razor-sharp groovers like Andre Kronert’s ‘King Swing Stomp’ a forthcoming Len Faki remix of Edward’s 2008 classic ‘Grindhouse’ and the new LP’s diva-sampling title track. Despite the less-than-rammed room, the energy is sky-high – and though he’s not the kind of DJ to pump his fists in appreciation, he has a look of quiet satisfaction on his face.

Enjoying a beer a few hours before the gig, Edwards comes across as, well, extremely normal. Sure enough the Londoner – who’s called Berlin home for the last few years – is dressed in his usual uniform (black baseball hat, black tee, dark jeans); he’s subdued yet good-natured, certainly aware of his place high in the electronic music firmament, but still surprised by it. “At the heart of it, I’m basically just a music fanboy,” he says.

But this fanboy, whose tunes are as effective at a sun-dappled megafest as they are at a sweaty basement afterhours, has become a nexus of sorts within the dance music community. Through Rekids, Edwards has played an integral role in the rise of artists like Mr G, Spencer Parker and Nina Kraviz: “Nina was completely unknown when we started with her,” Edwards says with a touch of pride. He relentlessly fiddles with his fellow producers’ work: Discogs gives him 390 remix credits (“Yeah, I’ve done a few,” he allows) with names like Cassy, Dinky and Fur Coat all making recent appearances on that list. And just within the past year, his own work has been retooled by the likes of Marcel Dettman, Rødhåd, Tuff City Kids and Robert Hood’s father-and-daughter duo Floorplan. “Robert’s one of the only people at the moment who is truly great,” Edwards says of the Detroit pioneer. "I’m really lucky that people like that want to do things with me, and I think it might be because I’m open-minded towards all types of music” – before adding in in typically understated fashion, “and that, perhaps, is an attractive trait.”

Tuff City Kids’ Gerd Janson, whose Running Back label has released several Radio Slave tracks over the years, is among the legion of Edwards’ fans. “Matt’s one of the best producers of club music around,” he says. “He has an uncanny ability to do ten-minute tracks that don’t get boring, the kind of tracks where you’ll just suddenly get an open hi-hat and it’s like, wow. He’s in the music business for the actual music, and unfortunately, you can’t say that about everyone.” Rødhåd, meanwhile, is keen to stress how deep Matt’s music geekery runs, saying, “You can talk with him for hours about basslines and hi-hats. There are not many people as fully involved in the music as Matt.” 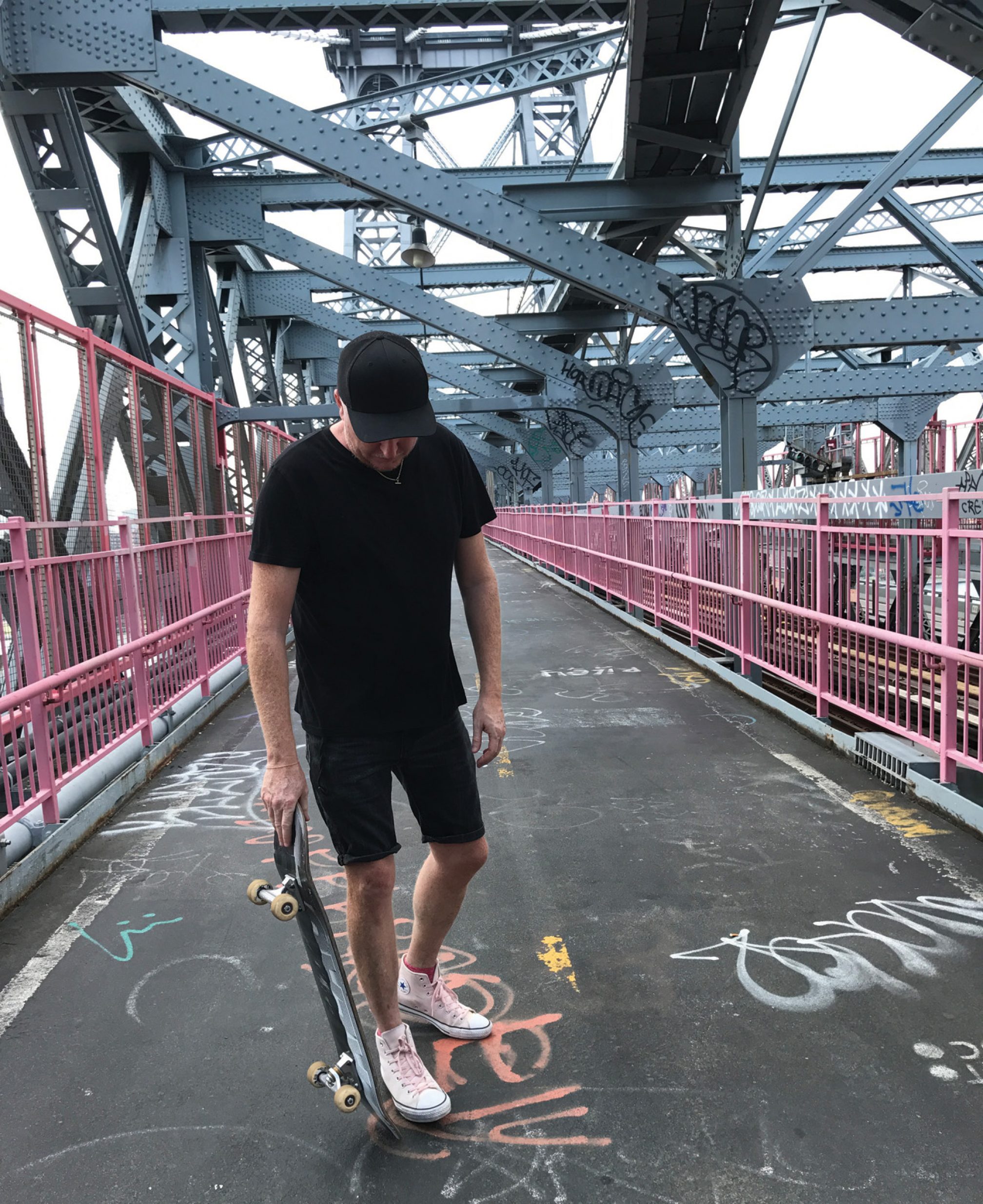 Sitting at the hotel bar, Edwards, 42, is eager to talk about ‘Feel The Same’, an album that frequently wanders off the elegantly linear path set by tracks like ‘Grindhouse’ or last year’s ‘Vision’. That classic Radio Slave sound is there on the new LP for those who want it, of course – check the title track and the acidic ‘Trans’ – but the record also boasts tension-filled ambience (‘Second Home’), downtempo (‘101’), electro (‘Geisterstadt’), old-skool breaks (‘With You’), and what could loosely be termed broken-beat techno (‘Forana’). As with much of Edwards’s best work, the tracks come blanketed in an otherworldly sheen, a mesmeric feel that Rødhåd describes simply as “super-hypnotic.”

“It was good therapy to be doing music that wasn’t necessarily 4/4,” Edward’s admits. “I could have made a straightforward techno record… or even an album of ambient drones, or something else that’s selling right now, but I just wanted to paint a picture of what I am.”

And what Edwards is, it seems, is a man with a renewed focus. It seems odd for somebody as accomplished, but the late 00s saw him pushing through a period of self-doubt. “Around the time I made ‘Grindhouse’ in 2007 I was touring a lot, playing with a lot of people who seemed to be successful,” he recalls, “and I think I started falling into the trap that I should play just like them if I’m going to be doing the kind of big events that they were. I got a little bit lost in my approach. Tech-house was the big thing, and I got lumped in with that world for a while.”

Almost shockingly, ‘Feel The Same’ is the veteran’s first purpose-made LP under the Radio Slave banner – but even before Edwards adopted the pseudonym in 2001, he was a clubland lifer. His career began at Nicky Holloway’s seminal Milk Bar in London, where he secured a DJ residency in 1992. “Around the same time, I was discovering disco through going to hear Larry Levan at Ministry of Sound, which blew my mind back then,” he says. By 1994 he was running the South Circular Recordings label with a couple of friends, and releasing a series of jacking house EPs as Dogtrax.

At the same time, he and his future Quiet Village partner Joel Martin (“a real library-music freak”) were sowing further seeds. “Joel and I would go to a car boot sale every Sunday to dig,” he recalls, “and I was getting obsessed by this music, and that started getting me into the idea of re-edits.” A rejigging of Kylie Minogue’s ‘Can’t Get You Out of My Head’, taking drums from Jon Luongo remix of Visage’s ‘Fade To Grey’ and sections of Roxy Music’s ‘Angel Eyes’ to craft an icy-cool, 10-minute masterpiece, served as his first record under the Radio Slave alias. Initially produced so that Edwards could have a version to play at his residency at Brighton’s Stompa Phunk, it found its way into the hands of Pete Tong, who played it on Radio 1, and “it just exploded. That’s what got the ball rolling.” 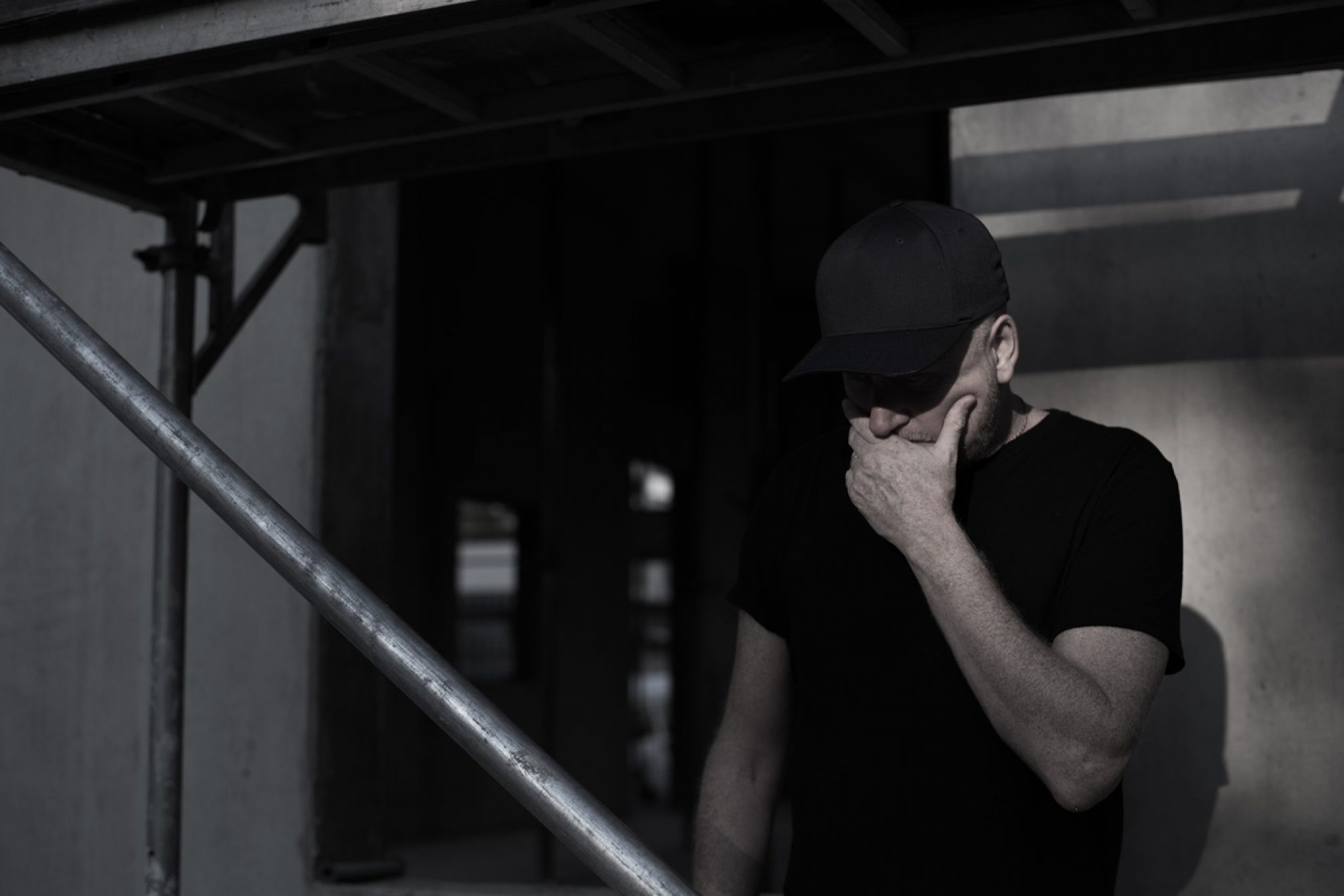 That ball hasn’t always travelled in a straight line, of course. There was the frustration with tech-house pigeonholing, which even led Edwards to contemplate retiring the Radio Slave name, and Rekids itself went on an 18-month sabbatical at the end of 2013 due to distribution and accounting issues.

But with the release of the ‘Feel The Same’, he’s in good cheer. “I finally feel like I’m in a place where I’m free,” he says. His life in Berlin with his wife, and his child who’s recently turned two, has undoubtedly contributed to that happiness. “By the time I moved to Berlin, a large part of the international electronic music community was already here,” he explains.


“I felt like a bit of a latecomer, but I feel like it’s one of the last outposts of bohemian culture. There are so many pockets of creativity: visual artists, musicians. It has that gritty vibe that I really like, it’s really easy to navigate, and it has amazing record stores. I’m a regular offender at the record shops!” He’s not kidding: At last count, Edwards’ collection numbers around 10,000. 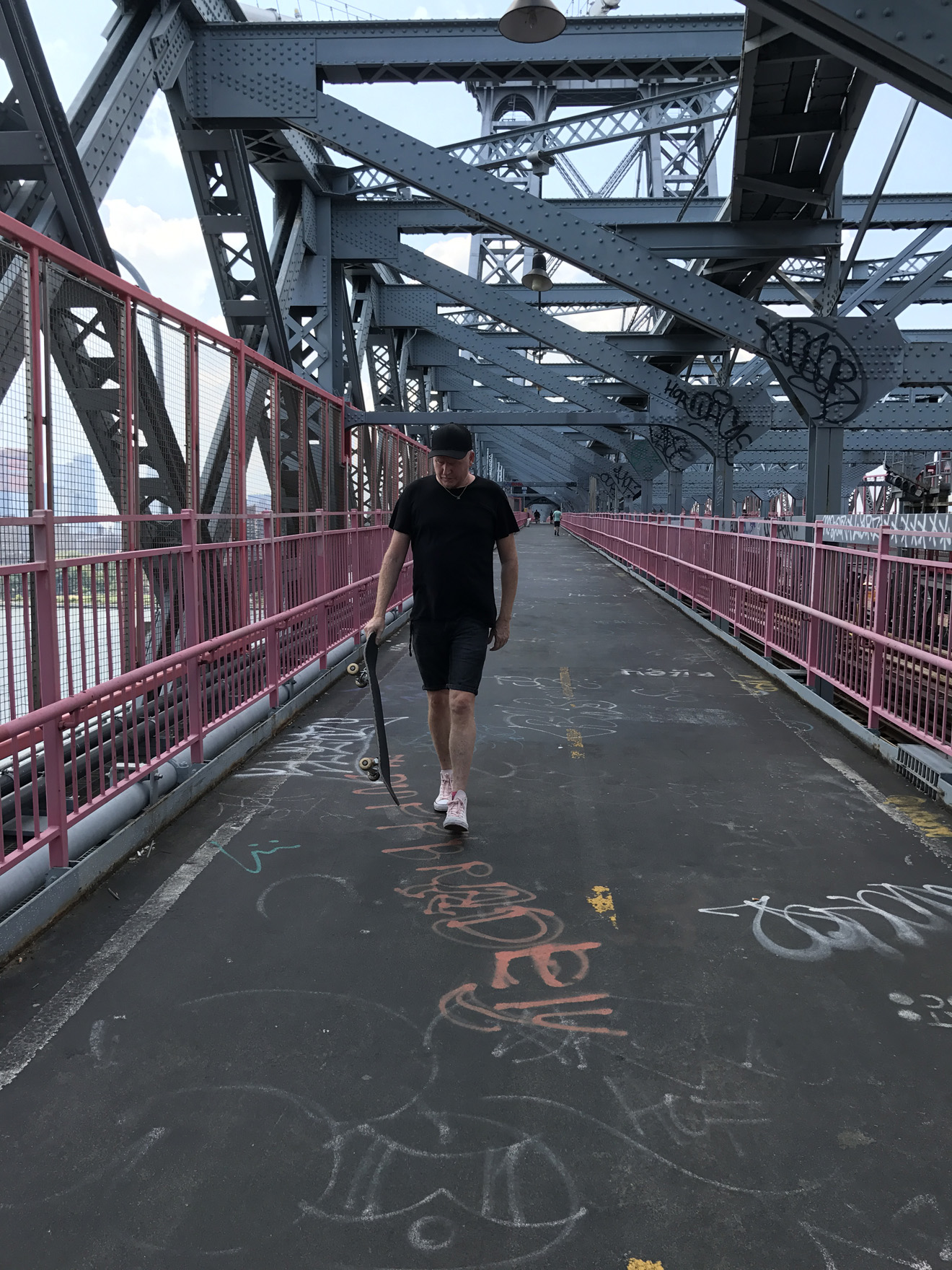 He’s putting that music to good use, with his devotion to DJing at an all-time high, a full quarter-century on from his Milk Bar residency. His eyes light up when reminiscing about a recent gig at Berlin’s Panorama Bar where he showed up on one hour’s sleep to play what was supposed to be the weekend’s six-hour closing set. “It just kept getting busier and busier,” he says. “It ended up carrying on for thirteen hours. A lot of my friends were there, and it felt like an afterparty at home – only in a club, with intense energy. It was one of the best nights I’ve ever had.”

Edwards’ revived passion has even led to plans for a rebirth of Quiet Village, with the duo working on the first album under the name since 2008’s ‘Silent Movie’. “[Joel and I] have been in the studio recording demos,” he confirms. “It’s probably going to be more of a recorded project this time, rather than samples.”

But right now, his focus is on his most famous persona. “It’s so satisfying that Radio Slave has stood the test of time, and it’s connected with a younger audience as well,” he says. “As you get older it’s certainly nice to have young fans, the kind who are also fans of Ben UFO and Pearson Sound. There’s always that feeling that this is a young man’s game, and maybe you can’t connect to those people any more. But it seems like I still am – so whatever it is I’m doing is working, I guess!”

'Feel The Same' is out now on Rekids