Stephen and David Dewaele are more relaxed in person than their sound suggests. As the architects behind Soulwax and 2manydjs, the Belgian brothers have become known for assembling hard-hitting songs and mayhem-ridden mixes prone to leaving minds spun and jaws dropped in their wake. But off-stage, the two are polite to a near-fault; always clad in beige or gray suits and never ones to bring attention to themselves, it’s tempting to second-guess if they’re really the artists responsible for numbers as potent as ‘NY Excuse’ or ‘Accidents and Compliments’.

“Even when we try to do something that's completely different in our heads — we'll try and make something really Balearic —it always ends up kind of like this,” David says. “That's inherent, it's in our DNA.”

It’s a fitting attribute for a pair that once toured as The Fucking Dewaele Brothers. A decade onward from their seminal Radio Soulwax tour and era-encapsulating album ‘Nite Versions,’ Stephen and David are still finding fresh ways to top themselves. They had an especially fruitful 2018, having spent the year overseeing their DEEWEE record label, releasing a new LP and touring relentlessly before headlining the inaugural edition of Friendship in December.

With 2019 in full swing, the Dewaeles are now preparing the next phase of their already-lengthy career. 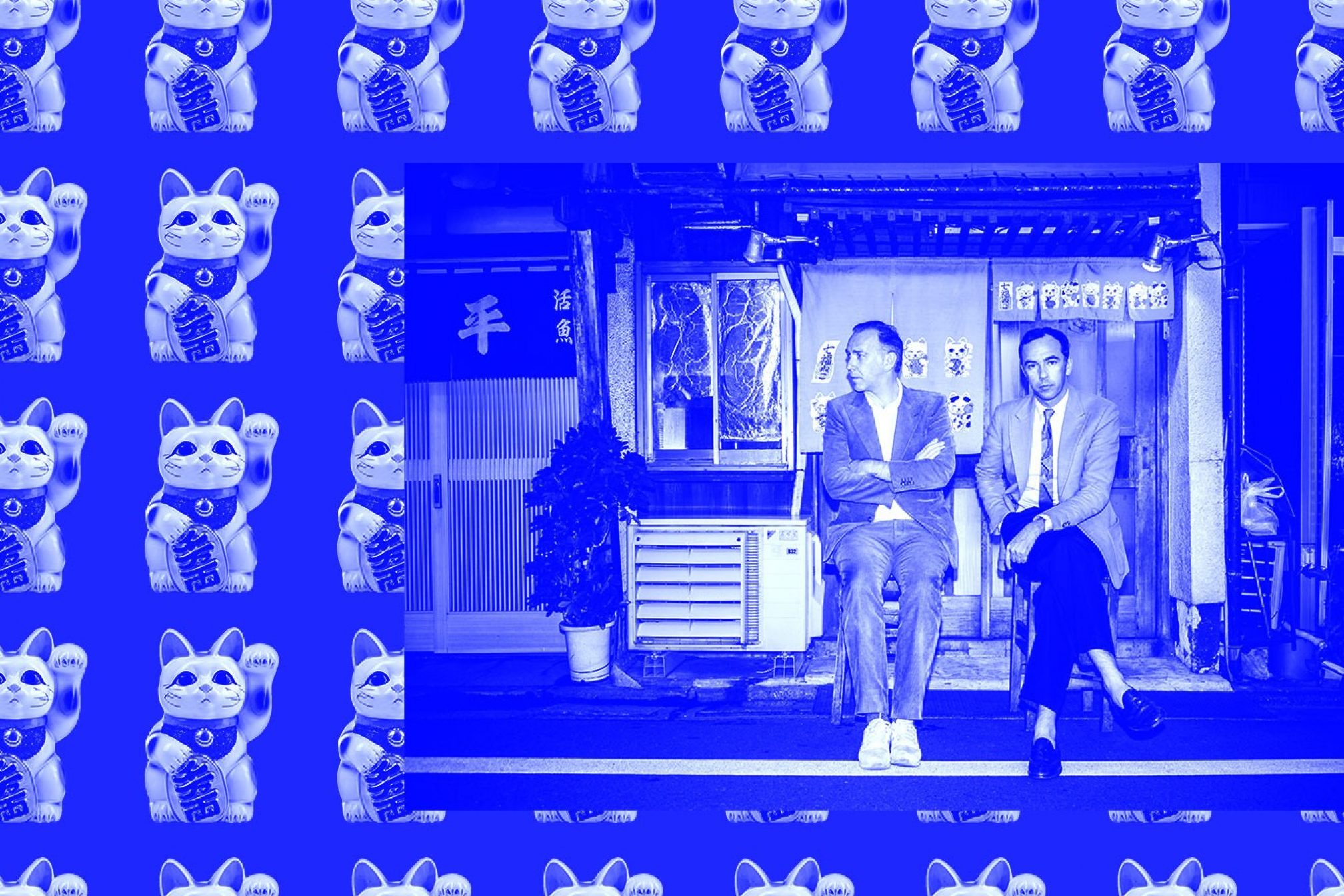 In 2002, Stephen and Dave became infamous for trading in the unexpected as 2manydjs. Their breakthrough release, ‘As Heard on Radio Soulwax Pt. 2’, foretold the rise of the mash up, the genre-bending sounds of bloghouse, and a DJ culture that would prize diverse record crates over strictly demarcated lanes of sound.

The album-cum-DJ-mix bolstered a reputation the Ghent-born and based brothers initially gained as a rock band under Soulwax. With originals and remixes that stacked screeching synth lines on top of searing axe riffs, Soulwax became inextricably tied to the period when kids began selling their guitars to buy turntables and vice versa.

The frenzied enthusiasm 2manydjs and Soulwax elicit from audiences is vividly rendered in the 2008 documentary ‘Part of the Weekend Never Dies.’ Taking its name from the refrain of their ‘Nite Versions’ remix of ‘E Talking,’ the movie stitches rowdy concert footage from the worldwide Radio Soulwax tour together with slightly quieter interviews and moments captured on the road.

From the first 2005 gig at fabric to the tour’s final dates in 2008, the Radio Soulwax shows saw the Dewaeles perform first with Soulwax before closing as 2manydjs, with acts including Hot Chip, Justice and Tiga providing sets in-between. The concerts often caused literal blood, sweat, and tears to be shed amid a sea of blinding neon and American Apparel. One filmed concertgoer calls the madness “possibly the best thing I’ve ever seen in my whole entire life” before deeming Radio Soulwax “beyond diabolical.”

Stephen admits he and David are “probably to blame a little bit” for the subsequent EDM excess that arose from the height of bloghouse mania. 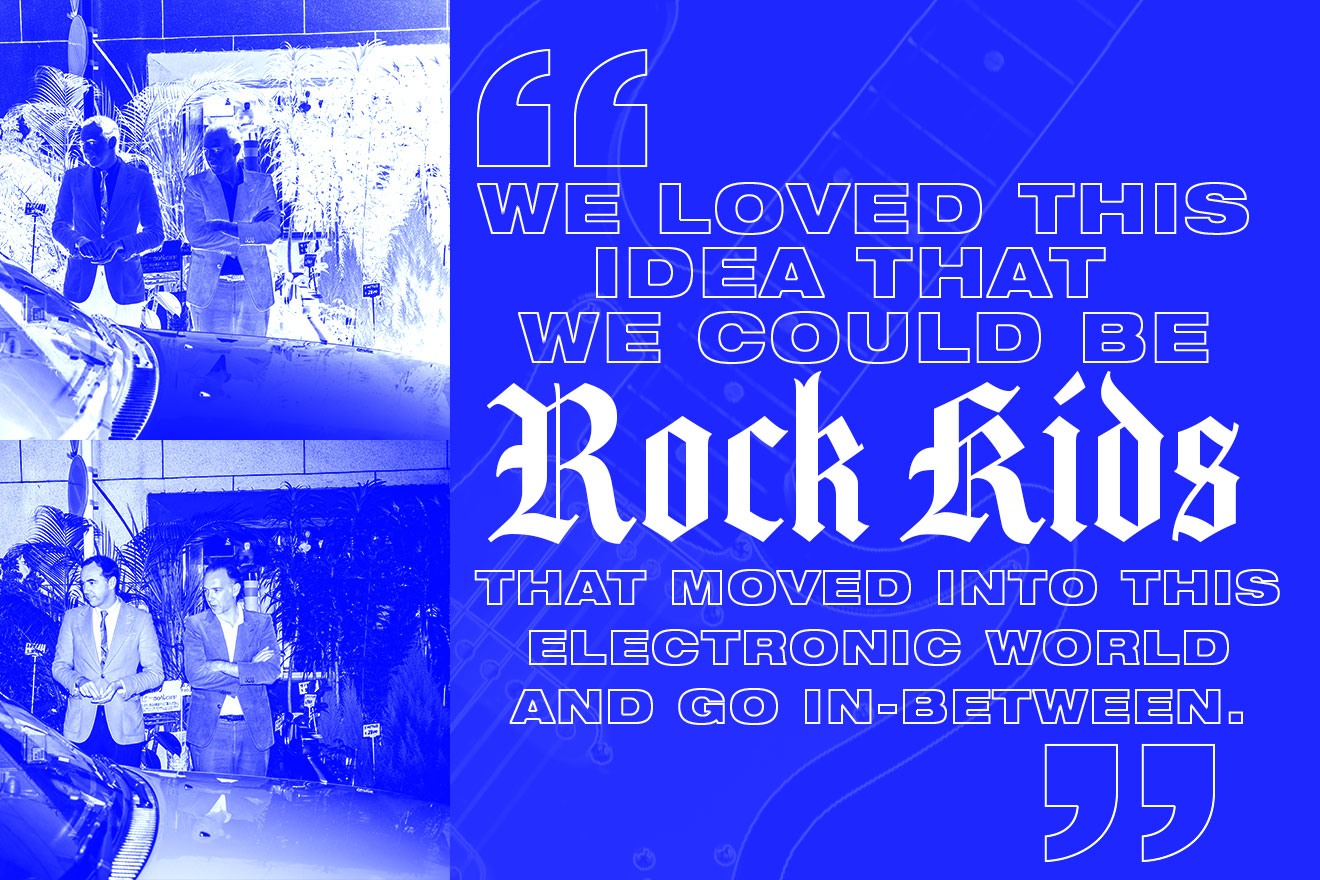 “[James] Murphy once said it felt like we were almost a rock show for people,” he says, referring to 2manydjs sets during that time. “[Audiences] were like ‘What the fuck's going on?!’” The lines separating Soulwax from 2manydjs became increasingly blurred as the brothers showcased both in rapid succession. “We needed both," Stephen says. "They each feed each other, they each need each other — we loved this idea that we could be rock kids that moved into this electronic world and go in-between.”

The Dewaeles have since toned down the rigor of their touring and recording schedules. They kept busy in the first half of the 2010s with an ambitious Radio Soulwax app that placed an ample selection of their 60,000-plus records into the pockets of fans.

By the time the undertaking concluded with an animated version of ‘As Heard on Radio Soulwax Pt. 2’ in 2014, the app was hosting 24 hour-long mixes with a complementary short film for each. The duo also debuted Despacio — an imposing 50,000-watt soundsystem designed to bring high fidelity audio out of the home and into the club — in collaboration with James Murphy at the 2013 edition of Manchester International Festival.

“We wanted to do a thing where it wasn't about the DJ, it wasn't about the lights, the effects, or the stage,” Stephen says of the philosophy underpinning the traveling dance floor. “It was more about people being together and this communal feeling; that's why I think it's become so special for a lot of people.” Accounts of Despacio often attest to its potential for poignancy, a quality those in its DJ booth have experienced for themselves.

“We played Coachella with Despacio and Prince died before the second weekend,” Stephen recounts of the installation’s 2016 outing at the Indio, California festival. “James was playing, and because we didn't have a lot of Prince with us, we had to go find Prince records.” Once the records had been gathered, and with Despacio’s white lights now emanating purple, the Dewaeles and LCD Soundsystem frontman proceeded to play nothing but Prince for three hours. Stephen laughs before sharing the most profound moment of the evening.

“We played ‘Purple Rain’ and I remember James, Dave and me didn't talk, and then I could see all three of us were bawling —we were crying,” he says, prompting Dave to utter “Ah, right.” “Something about the soundsystem, it makes you emotional — but in a good, euphoric way,” Stephen continues. “In a song like that and in a moment like that it just hits you,” he says as he smacks his palm. 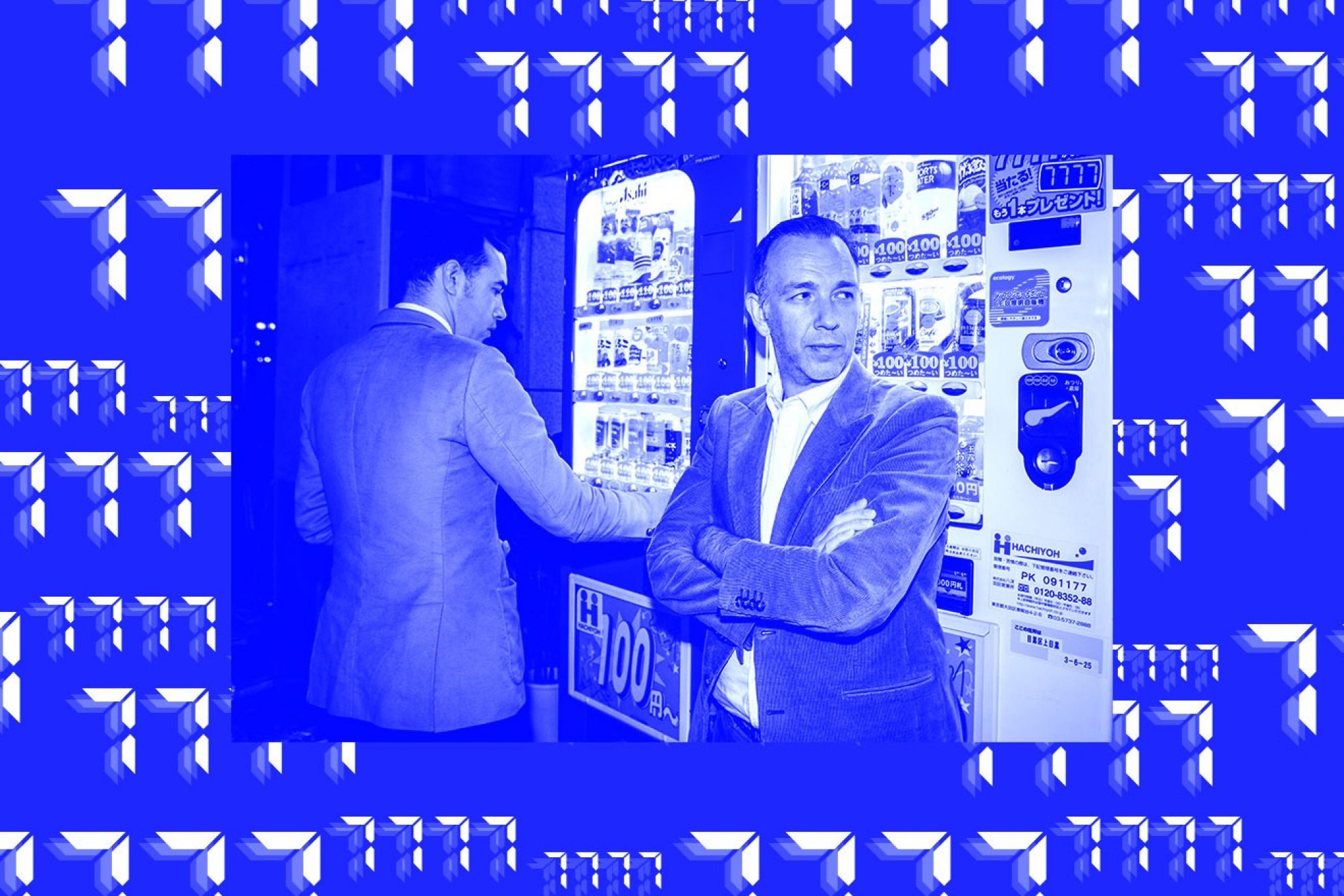 After starting 2018 with a series of 2manydjs and Despacio dates, the brothers spent April at two consecutive Coachella weekends. Appearing as Soulwax, the festival marked the first time their ‘From Deewee’ live setup was performed in the United States. The so-called “Transient Program For Drums And Machinery” sees the band joined onstage by the sizable chrome head adorning the cover of ‘From Deewee’ along with minimalist lighting deployed to maximum effect.

“I think if people pay money to come and see you do something, you have to give something to them,” Stephen says, acknowledging that a seven-person band performing on three drum kits and a live studio is a “crazy setup.”

Opting not to wait another decade between Soulwax albums, they released the 12-track ‘Essential’ in June. First shared on a May 2017 broadcast of BBC Radio 1’s Essential Mix, ‘Essential’ was recorded in just two weeks and made history as the first original material composed specifically for the program.

Stephen and David also personally handled every release on their label DEEWEE. Founded in 2015 in the brothers’ Ghent studio, several of its 2018 releases — such as Charlotte Adigéry's ‘Paténipat’ and Sworn Virgins’ disco piss-take ‘Fifty Dollar Bills’ — become sleeper hits spun by the likes of Tim Sweeney and Axel Boman.

“Since maybe 2003, people would regularly come to us and say ‘You guys should do a label,’” Dave remembers. “Pedro [Winter, aka Busy P] had one, our friend Erol [Alkan] had one, Boys Noize-”

“Dave and me are really good at working on music, but there's so many other things that we were always like ‘We're not going to get involved with that,’” Stephen says.

With the construction of Studio Deewee in 2014, the brothers caved.

“We could do a label, but everything that we do has to come out of this building,” Stephen says. “We'll come back next week, we'll walk in, and there's somebody working. It's exciting, because then we can go with them, go back into it and finish this thing together. But everything that's on DEEWEE comes out of that mixing desk from Dave and me.” 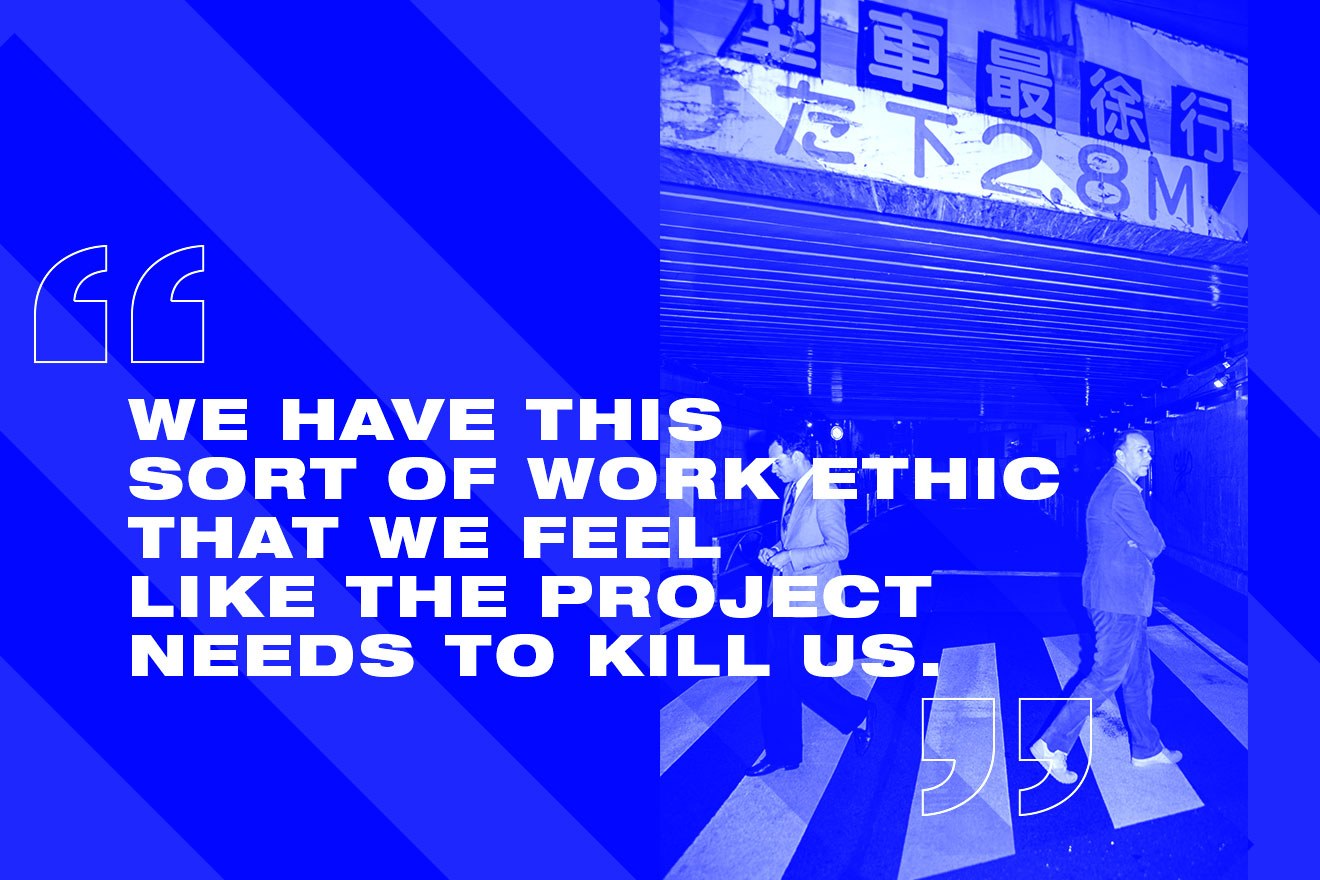 With so much on their plate, Stephen and David almost overlooked the 10th anniversary of ‘Part of the Weekend Never Dies’ in September. “The honest truth is… until like five days before, we were unaware,” David says. “Someone told us and we were like ‘Ah okay, cool!’” The movie was subsequently uploaded to YouTube and made available for the first time in HD to mark the occasion.

But even with the opportunity for reflection and nostalgia presented by the anniversary, neither Stephen nor David spent any time dwelling on the past.

“In order to keep pushing the envelope for ourselves, we can't look back at what's happened before,” David says. Stephen notes even their recent history isn’t given much thought. “It was the year before and the year before and the year before that all led up to this,” he says of their substantial 2018 output. “In Soulwax, it's taken us two years to get that concept of playing with three drummers, having Igor from Sepultura in the band, playing that record in one take, recording it in one take- all this stuff! The fact that we were able to bring it to Coachella and do the shows in San Francisco was amazing, and all of that took a lot of time. So the prolificness of that year... Maybe we're not aware of it. Maybe we shield ourselves a little bit from it.”

The Dewaeles have playfully alluded to their compulsion for constant challenge before, with the “Why Do Things the Easy Way?” credo of the Radio Soulwax app and the text-heavy covers of ‘Most of the Remixes…’ and ‘Essential’ standing out in particular.

“The amateur psychology student in me would say we definitely have a thing that if we didn't kill ourselves making it, it kind of feels less valid,” Dave says. “Sometimes we make something in five minutes and it's as good as the other stuff, but we have this sort of work ethic that we feel like the project needs to kill us. I think that's where we come from; it's our family, there's a strong work ethic.”

Stephen characterizes their shared restlessness as “an unnatural desire to always color outside of the box a little bit.”

While most were winding down for the holidays, Stephen and David remained customarily occupied through the end of 2018. The brothers played no less than five sets over the course of Friendship, including a round alongside Busy P and Boys Noize which saw the Ed Banger labelhead lead a roomful of revelers in screaming the melody of Soulwax’s 'Phantom Pt. II’ remix. After kicking off 2019 with a nearly three-hour New Year’s Eve mix made for BBC Radio 6 Music, they’ve had their hands full with the recent releases of Charlotte Adigéry's ‘Zandoli’ EP and ‘Paciencia,’ the forthcoming debut album from Brazilian duo Phillipi and Rodrigo, on DEEWEE.

As for the projects they’re most closely associated with, the Dewaeles are currently refining the next iteration of 2manydjs’ visual-heavy live show while making time for yet more DJ gigs and studio sessions as Soulwax.

Zach Schlein is a freelance writer based in Miami. Find more of his work here