At about 6pm on Saturday evening, with the Celebrity Infinity cutting across the turquoise waters of the Gulf Of Mexico somewhere north of Havana, Prok & Fitch and Hot Since 82 cease their b2b set and a call goes out on the microphone for ‘Brandon’. After slightly too long, he’s finally located and given the mic in front of the elevated DJ booth. The top deck dancefloor of this vast cruise ship falls silent, save for some bubbling from the twin hot tubs and the clink of glasses behind the bars. Brandon drops to one knee. “Burg,” he says, in a Deep South accent so thick you could tar a road with it; “will you marry me?”

She says yes! And the crowd on the dancefloor – which includes a warrior princess /cavewoman in a fur bikini, a sexy goth Cruella de Ville on stilletos and a 6’5” bearded man with a large belly and a curly pink wig, roars its approval. There will be a handful of marriage proposals over the course of this trip, but it’s always good to be first.

Mixmag has no immediate plans for becoming affianced, but we are regretting packing just one pair of black trousers and four black T-shirts for Groove Cruise. And not just for the usual hygiene reasons. The cornucopia of fancy dress outfits is overwhelming. The dancefloor on the top deck of this huge Millennium class cruise ship (it’s 294m long, with space for over 2,000 people) is a kaleidoscope of cowboys and mermaids and Aquamen and dinosaurs even before we pull away from dock at the giant’s playground of Florida’s Fort Lauderdale Port, but it’s in the lifts between the 11 floors of this floating carnival that we feel most acutely underdressed. Each floor admits another influx of creativity and characters, from Black Caesar with a hand-made golden goblet to the impassively beautiful couple in teeny-tiny sequinned swimwear, clutching perfect Daft Punk reproduction helmets. The standard is high; more Comic Con than stag party. There are still three nights and days to come of a journey that will take us to Key West at the very Southern tip of the US, then to the Mexican Caribbean island of Cozumel and back again. The music, and the party, never stop. 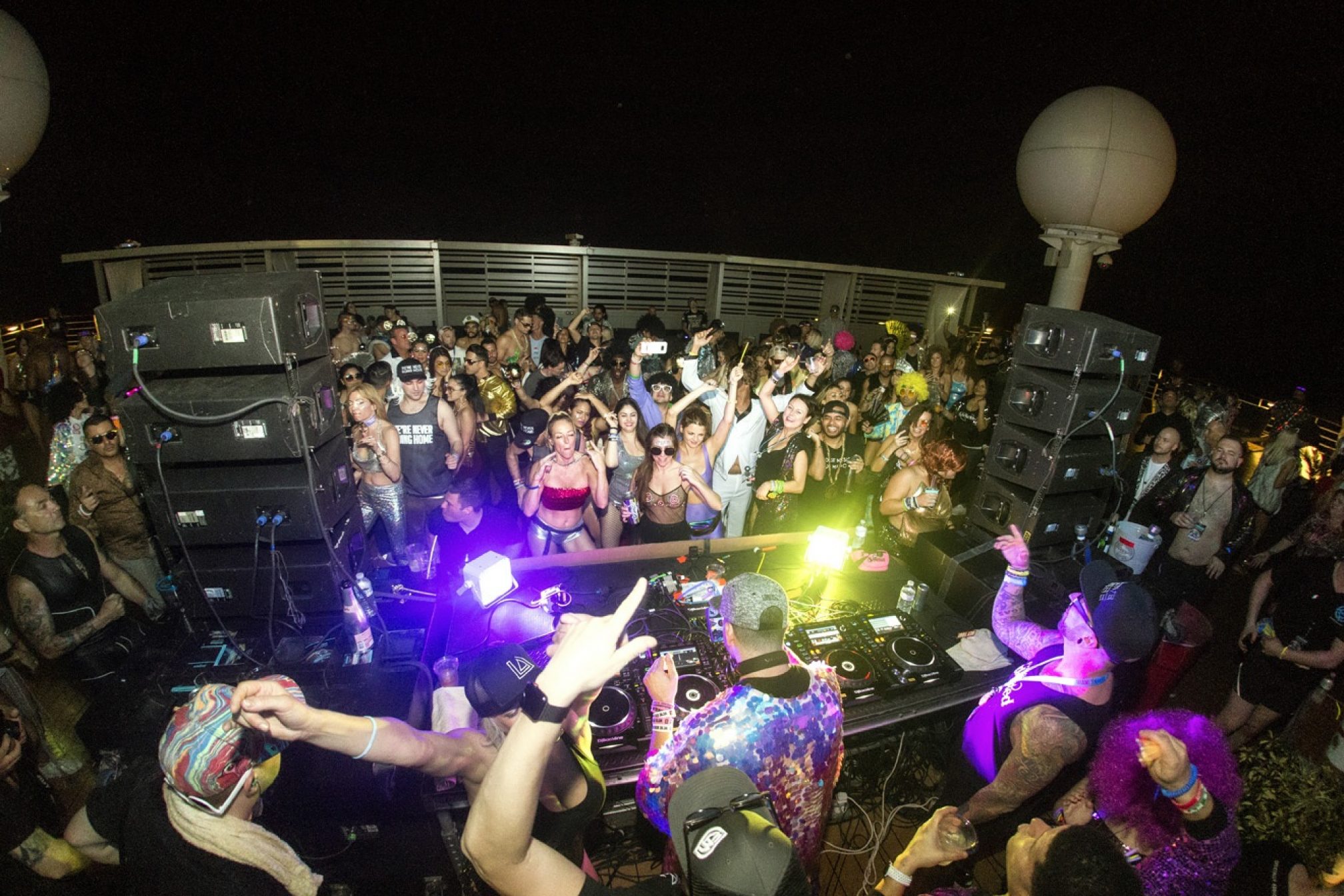 With a background in the travel business, Groove Cruise founder Jason Beukema spotted a gap in the market when he was on a standard cruise himself and looking for something to do after dark. In 2004 he launched his first venture. Unsurprisingly, given that it was subsidised by his credit card, renting an entire ship was out of the question: the first cruise saw 125 ravers sharing a ship with 3,000 more typical cruise punters – families and retirees – using private lounges and excursions. Seven years later he finally booked his first entire cruise ship, and there have been a total of 31 Groove Cruises in 15 years, on both coasts of the US. Beukema’s company Whet Travel has turned into a theme cruise specialist, from Salsa cruises to ‘Shiprocked’ with bands like Papa Roach. There have been setbacks – last year, catastrophic weather conditions on the West Coast resulted in a last minute change of plan and some frenzied rescheduling and relocation of DJs and events, but Jason – and many of the attendees – reckon it was the most enjoyable ever.

The demographic for Groove Cruise is mostly American and slightly older than, say, Holy Ship. The vibe is one of escapism for working 20-, 30- and even some 40-somethings on a four-day vacation from reality – an atmosphere that the constantly changing fancy dress around us (there are eight different themes across four days and nights, and many people have a different outfit for each) only adds to. Typical of the people we meet is Kevin, a paediatric nurse and dance music enthusiast from Florida, for whom this event is a much needed release from a day job working with seriously ill children. The line-up is an eclectic one that ranges from Groove Cruise residents and favourites like Kristina Sky, Scooter and Lizzie Curious (Kristina sees her job as adding ‘texture’ supplementing the trancier headliners with a deeper exploration of less obvious classics that add context to the experience) to established names like Markus Schulz, MK, Roger Sanchez and Kaskade (who plays the beach party on Cozumel) to more underground European artists like Hot Since 82, Prok & Fitch and Chus & Ceballos.

Key to this evolution is Chicago-based DJ and artist Anthony Attalla. First booked for Groove Cruise back in 2008, in 2013 he started booking the afterhours events under the aegis of his label, Incorrect Records. Since then, he’s helped curate the underground side of the artists for Groove Cruise. Besides his mission to keep the music forward-looking and expose the crowd to new sounds, Anthony likens booking the right DJs to a sports team signing a player: it’s not just their skills that matter, but how they interact with the group. Which is handy when you want Roger Sanchez to host a mixology class, for example, or Simon Patterson to play arcade games with punters in the casino. 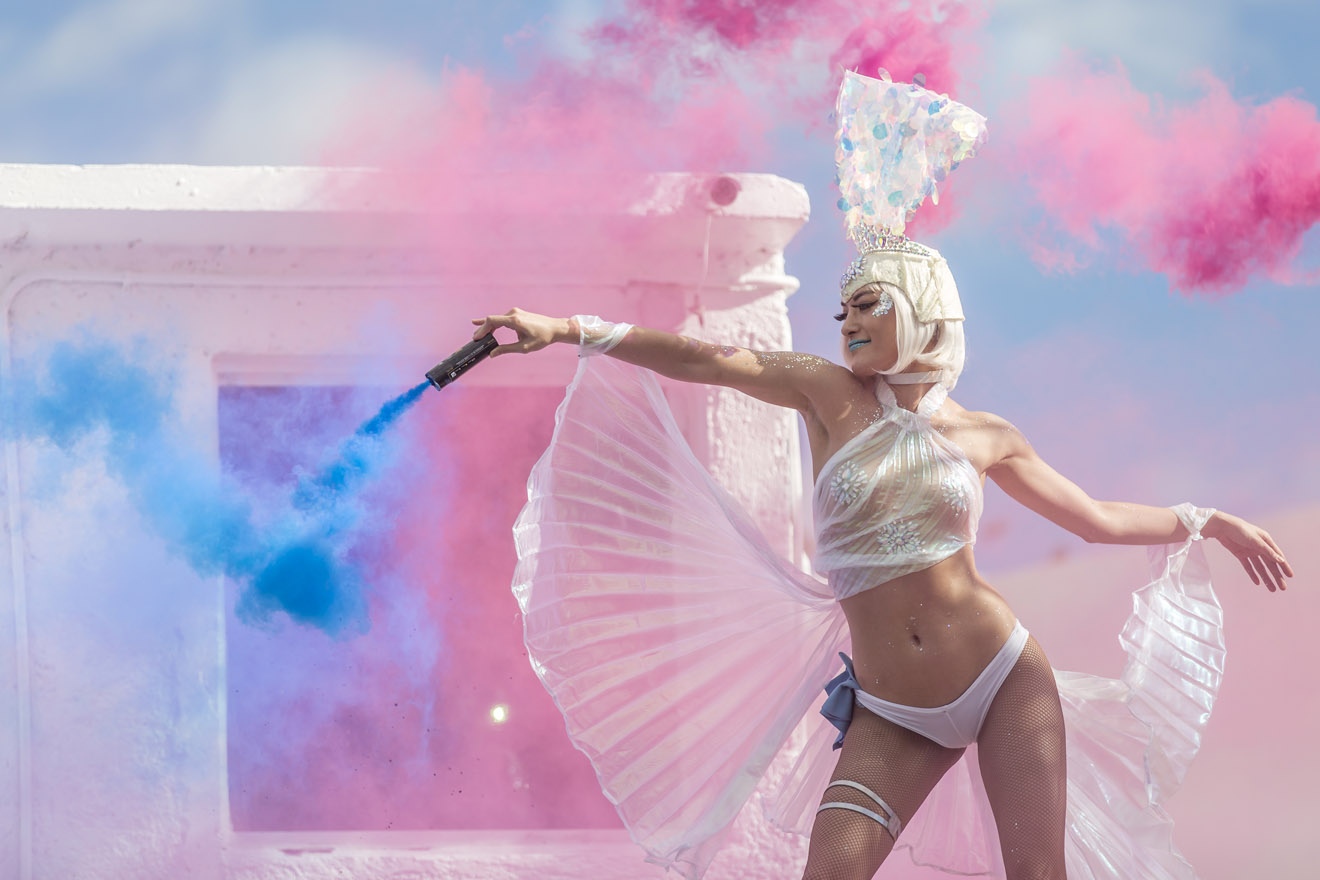 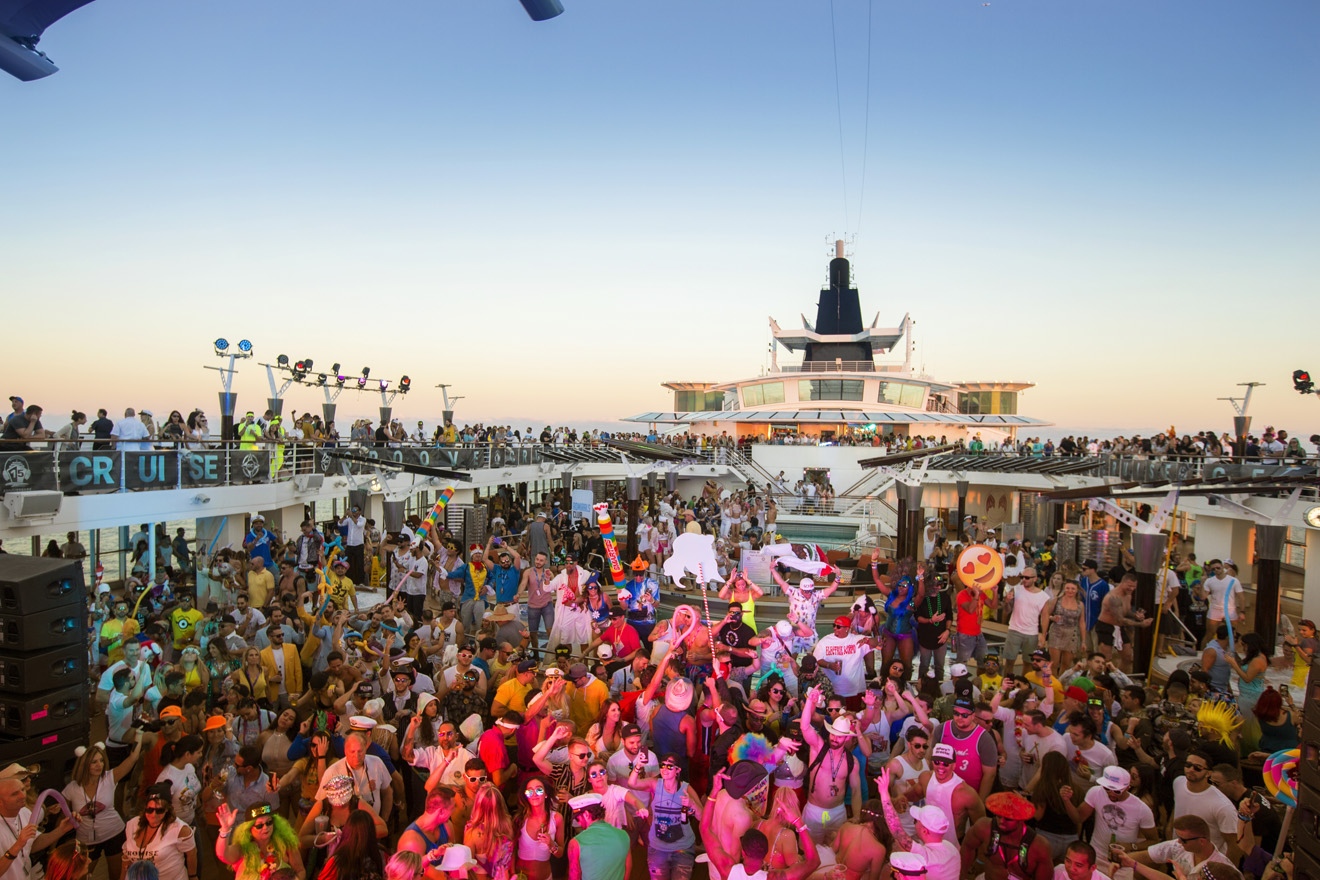 British tech-house duo Eli & Fur are an example of an act getting as much out of Groove Cruise as they put in; the very first night they can be found in the ballroom space dancing away with a man dressed as a pimp to a brilliant disco set by Ralphie Mercado. The duo are clearly enjoying the chance to do something different from the standard club and festival grind, and tell us they’ve brought a couple of friends along for the ride, and will head to Mexico for a holiday straight after. Their deckside set on the afternoon of the second day as we ease away from Key West – a place so calm and relaxed that even a delegation of hundreds of semi-naked lunatics disembarking from the ship on an early morning ‘pub crawl’ can’t disturb its breezy equilibrium – is one of the musical highlights of the trip.

Anthony, and indeed anyone working with Groove Cruise, has to operate within the framework set up by Bekuema, a framework that micro-tweaks the experience based on exhaustive customer surveys (this year’s ‘Captain’s Survey’ has 43 questions, from asking attendees to rate every single DJ and arena and destination to their favourite energy drink). The responses will guide the next Cruise, as Jason and his team focus relentlessly on giving people more of what they want. More than a few of the regular DJs we talk to refer proudly to their high survey ratings – perhaps not something you’d expect to hear at, say, Unsound.

The final day’s fancy dress theme, as we glide back towards Fort Lauderdale under the Caribbean sun, is ‘50 Shades Of Disney’, something that has brought out a surprising amount of fetish-themed swimwear. But whether the attendees of this year’s Groove Cruise are going home with a new fiancé or just some very unusual tan lines, they won’t be going home with any complaints. It takes a lot of hard work to create this much fun.