Drum ‘n’ bass DJ and radio presenter Flight is remembering the moment she first decided to learn to mix. “I never thought that DJing was something I could do until I saw Kemistry and Storm for the first time, when I was 17,” she says. “Particularly Kemi – seeing a black woman of mixed heritage up there. They looked so cool and their music was outstanding.”

Having founded the iconic drum ‘n’ bass label Metalheadz with Goldie in 1994, Kemistry and Storm were pioneers on the scene as it grew from grassroots to mainstream. But drum ‘n’ bass has been notoriously male dominated since day one, and while it’s an issue across the music industry – in 2017, for instance, the BBC reported that 80 per cent of music festival acts were male – house and techno DJs like Honey Dijon, Peggy Gou and The Black Madonna regularly headline shows and sell out their own nights, with drum ‘n’ bass sadly lagging behind. “D’n’b is still very male dominated,” scene veteran DJ Fabio commented in 2015. “It shouldn’t be, after being around for two decades – but unfortunately it hasn’t changed much since the ’90s in that respect.”

The conversation bubbled to the surface on New Year’s Day 2018, when drum ‘n’ bass DJ Mantra tallied up the ratio of male-to-female acts at the previous year’s big-label drum ‘n’ bass shows. “I literally sat there with a new-born on my boob counting up the numbers,” she laughs. The results painted an undeniably unbalanced picture: Metalheadz hosted 75 male sets and 1 by a woman; Critical sets were 90 to 3; Hospital Records 251 to 2. Mantra’s own label Rupture, which she runs with her DJ partner DOUBLE 0, hosted 8 sets by women and 47 by men – far higher than their counterparts at 17 per cent female, but with still a way to go.

With both positive and negative responses flooding in, Mantra’s post sparked a conversation that was long overdue. “Labels needed to look at themselves,” says DJ and producer Sweetpea. But while Rupture’s New Year’s Resolution was to book at least one female artist per room at its Corsica Studios club nights, the following year saw little progress from other labels. By our count, at Hospital’s 2018 London shows, 159 sets were played by male DJs compared to 8 by women, and Metalheadz hosted 101 male DJs and 4 women DJs. On top of that, women DJs continued to be relegated to warm-up sets, rarely bagging a headline slot. So why are so few female artists succeeding in drum ‘n’ bass?

“It’s the question I can’t answer,” says Storm. “But it is tough to get recognised. It was easier for me and Kemi because we had each other. But in the early days we would consciously not tell promoters we were female. We’d arrive at the show and they’d be like, ‘oh, you’re girls! And there’s two of you!’”

In the early, anti-establishment days of the Metalheadz label, Kemistry and Storm would mentor acts within the family vibe fostered by themselves and Goldie. Storm describes how they became mother figures to many of the younger, male DJs coming through – one of which was DJ Digital, who admits that working with women from the beginning made an impact on the way he now approaches his own bookings on Function Records. “I do make an effort to book women,” he says, “but I go off talent first. But women DJs make sure they’re banging, when sometimes you get men signed to labels who cannot mix for toffee. Women want to prove themselves.”

But it was Kemistry and Storm’s influence on young female mixers that had the most lasting impact.

“If it wasn’t for them, I probably wouldn’t have started mixing,” says Flight. “I gave them my first mixtapes for feedback and Kemi encouraged me to keep at it.” It was the same story for Kemistry and Storm before her. “Being DJs was always in the back of our minds but it was only once we saw DJ Rap that we were like, ‘ok, we can do it,’” remembers Storm.

“Role models are everything,” agrees Mantra, who sent some of her very first mixes to Storm via MySpace. “I had so much self-doubt, but to have these figures who you see as goddesses saying, ‘I listened to your mix and I really rated it’, it gives you motivation.” Mantra’s first London booking was at a night curated by Storm’s female DJ collective Feline, which she launched in 2007. 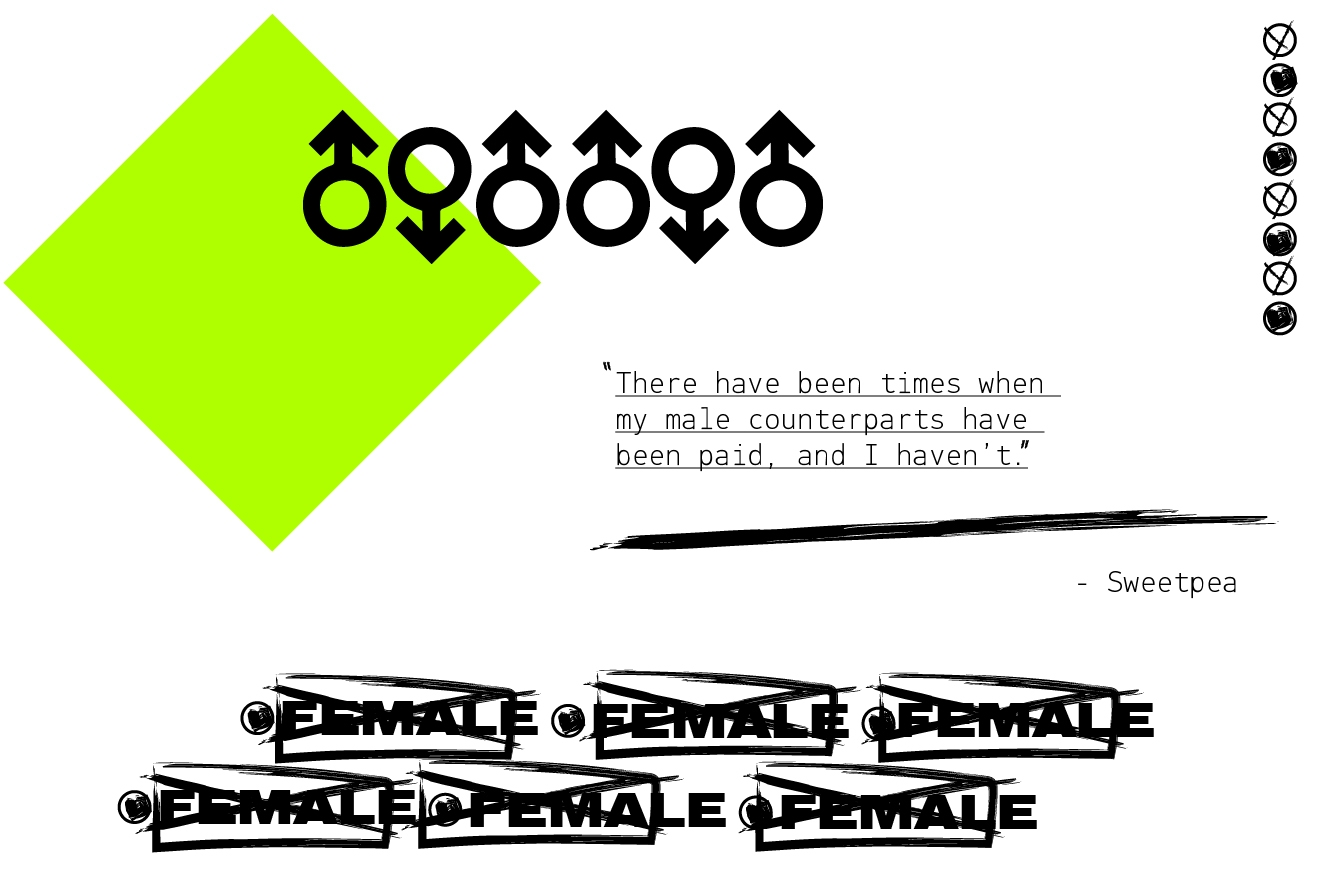 There’s always been a network of women supporting each other’s drum ‘n’ bass endeavours. But when representation is low, it takes coming together to create opportunities. After her Instagram post in early 2018, Mantra was approached to co-host a #NormalNotNovelty workshop on gender in drum ‘n’ bass at Red Bull Studios. Off the back of its success, she decided to launch a female and non-binary–only d’n’b workshop called EQ50, which returns for a second edition on 26 July at fabric.

Considering that without role models, these DJs might never have got behind the decks, forums like EQ50 – as well as similar women-led initiatives like the jump-up GTA collective, and KCDC in Bristol – are invaluable. But there are still some very concrete barriers to women getting on the line-up. “I’ve done a lot of free gigs,” says Sweetpea. “There have been times when my male counterparts have been paid, and I haven’t.”

Storm, Sweetpea and Mantra all point out that the producer-led nature of drum ‘n’ bass can leave behind female DJs who haven’t found the confidence or resources to produce their own tracks. “It’s such a shame, and it’s not like that in all other areas of music,” Mantra claims. “Nina Kraviz produces but she’s essentially known as a DJ.”

For Flight, there’s a clear reason for the lack of women on line-ups. “If there’s a white guy in charge, you will see majority white male performers,” she says. And female DJs bring more girls to the dancefloor. “When I’m on the line-up, it brings out more women,” says Storm. “It’s almost like you’re their hero.”

Hospital Records created a Women In Drum & Bass Facebook group, which has reached 1000 members and counting. “We’d like to get more women on the artist roster,” says promotions manager Nikki Ellis. “In five, 10, 15 years it would be great to get to 50/50 line-ups as the norm.” The team will announce some initiatives for women in the drum ‘n’ bass community later in the year. Time will tell how effective they’ll be – although this summer’s Hospitality in the Park festival line-up has more women booked than in 2018 (seven, rather than three).

No other large-scale drum ‘n’ bass labels have announced comparable gender equality initiatives, although they acknowledge the issue when asked. “The under representation of the female producer and DJ community in our music is something that has not gone unnoticed at Critical,” says that label’s founder, DJ and producer Kasra. “We are working on ways to re-address the balance. We hope to have news on this soon.”

As for Metalheadz, there’s no plan in place to address the issue of gender equality on their label – to which no female producers are currently signed, despite Storm remaining a resident DJ. “It's never been a big issue for Headz, it's always a case of talent first and foremost, regardless of that person’s sex,” says label manager Ant TC1, who also co-founded Dispatch Recordings in 2001 and has put out releases by Kyrist, Iris and Sweetpea. “Metalheadz is a label that two women played a major part in becoming what it did across the mid-90s – Kemistry and DJ Storm. Without these two and Goldie, Headz never would have become what it is today. I can only personally state that I wish there were more females representing talent across the scene.”

But for DJs like Mantra, there are easy ways for record labels to change the narrative. As labels run the majority of d’n’b parties in London, she sees it as their responsibility to put diversity more firmly on the radar when it comes to booking artists. “It’s not hard,” she says. “Music is at the forefront, and after that you look at having a mix of women in each room, and being as ethnically diverse as possible. Nothing gets sacrificed. We had 11 or 12 female DJs on our last Rupture line-up, and the only difference was that it felt really uplifting for the women there.”

The fact that software is becoming increasingly accessible could lead to a rise in female producers, too. “Computers have music software on them already now,” says Sweetpea, who also points to a number of smaller labels offering alternatives to the likes of Hospital and Headz. “Setting up a label is becoming a lot easier. Flexout Audio, Addictive Behaviour and Lifestyle are doing really well, and gender is less of an issue. It’s a generational thing.”

Visibility of women artists is vital, but more women behind the scenes is equally important. “I would love to see more female promoters,” says Mantra. “More women in positions where they’re holding the reins.”

As a scene, drum ‘n’ bass is firing on all cylinders. And, at the grassroots level, the centre of gravity is slowly shifting to represent the women who are into the sound and contributing to its progression. The scene is evolving, hopefully the old guard of d’n’b will evolve with it.