We first meet Deena Abdelwahed in the smoking area, right next to a hot pink, vape-branded tent, leather-jacketed clubbers drifting in and out past us to get their faces painted with glitter. The contrast with her dark, abrasive music couldn’t be starker. But in person Deena – crop-haired, wide-eyed, cheerful and friendly, her low voice accompanied by expansive gestures, is pretty difficult to reconcile with the intense, sometimes hostile sonics of her productions, too.

The reaction she does get, whether it’s on stage for her ‘Khonnar’ live show, at her Concrete residency or elsewhere at one of her countless international bookings for the likes of Unsound, Dekmantel, Sónar or Berghain’s Saüle, is anything but hostile. Fans worldwide – who after tonight will include the Parisian bouncers working the stage at Villette Sonique – are drawn like moths around a lightbulb to her fluid stage presence, authentic appreciation for global club sounds and vision of contemporary electronic music captured through a Middle Eastern lens. Along with fellow leftfield experimentalists-turned-headliners Aïsha Devi, Yves Tumor and Holly Herndon, Deena’s success reflects an appetite among 2019’s audiences for music that’s challenging in the best way possible: exploratory without succumbing to textbook tropes, impactful without the aid of ear-ringing effects, and genuinely compelling to listen to. Tonight, one fan in particular is left speechless at the sight of her, gawping as Deena emerges onto the stage and leans over her live set-up. The woman, standing front left, soon finds her voice and whoops excitedly along with the rest of the crowd. Deena stands observing her audience for a moment, before leaning towards her laptop and launching into ‘Rabbouni’, the last track on her debut album.

That album, ‘Khonnar’ – pronounced with a ‘hkk’ tongue roll that native English speakers among us will inevitably struggle with (Mixmag included) – was released on French label InFiné last year. It merged bass, techno and ambient with North African and Middle Eastern structures, vocals, synthesised instruments and more, and saw Deena discussing her identity, what she doesn’t like and what makes her angry throughout. After it came out she went into what she calls “a kind of depression”. She had more to let out – too much, in fact. She simply couldn’t have shared it all in one place; “people wouldn’t have understood everything I wanted to say,” she explains. Since then, she’s reimagined ‘Khonnar’ into a live show. She’d always intended to share the album this way, but tonight she seems to feel she may have been a little ambitious. “Playing live like this by myself, I’m trying my best but it’s actually not super fun,” she admits. “I’m not a multi-tasking kind of person. There are lots of details in my productions and I really tried to think about it before I arrived at the album. I said to myself, ‘This album is for a live set-up’ – yet when I first heard the album I said ‘Shit!’ because I’d put so many details in. But I need them, they talk about me.”

And Deena’s live performances are markedly different from her productions. It’s a more propulsive, ‘groovier’ journey, where beatless tracks like ‘Saratan’ are fitted with lashings of drums that rattle the chest cavity. Adapting the music this way was another conscious decision, she says, inspired by the way that r‘n’b stars like Erykah Badu use their shows to experiment. 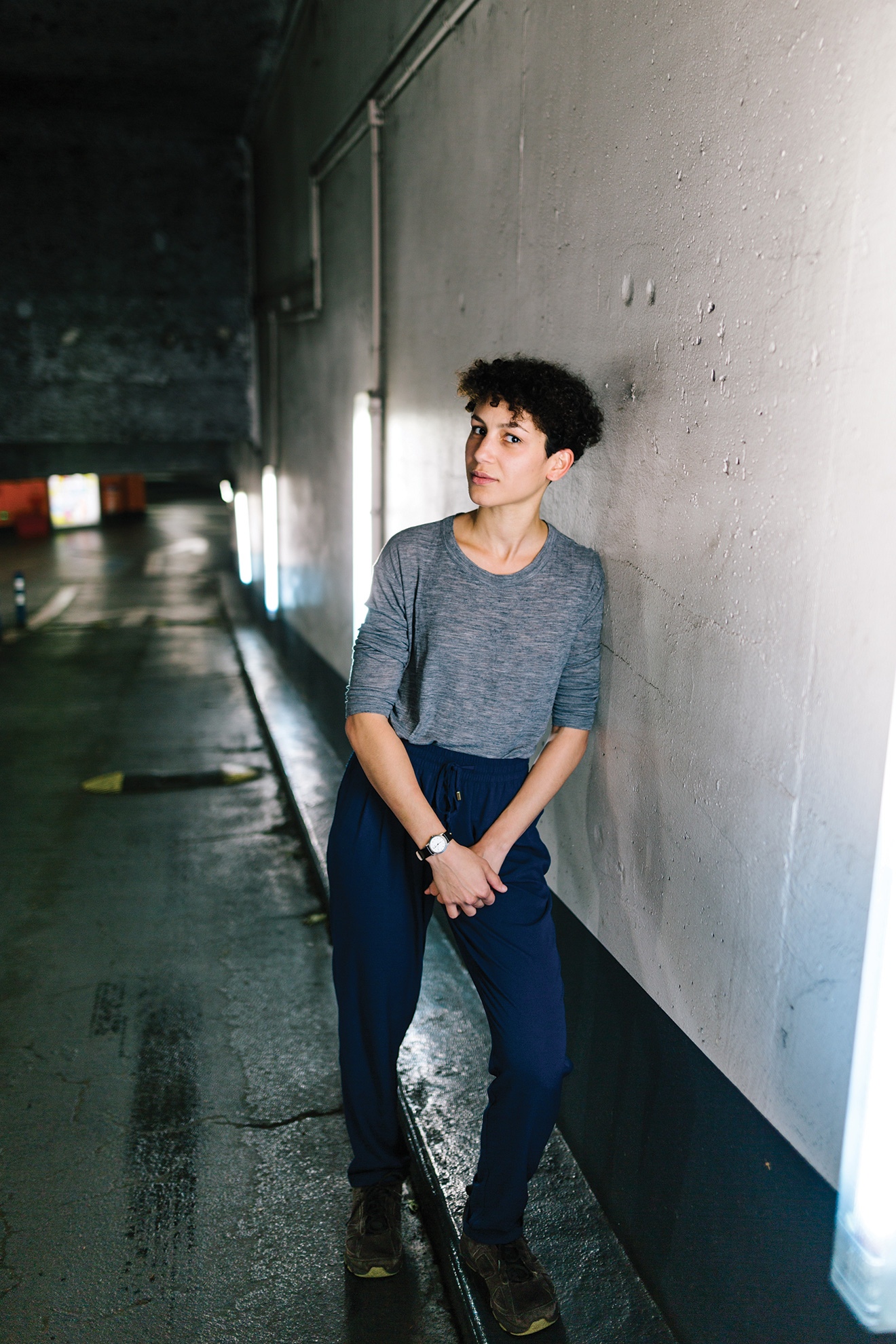 ‘Khonnar’, as well as earlier projects such as her first EP ‘Klabb’ (2017), are products of discontent and outsider experiences (it’s been hard to deal with, “heavy”, she says – even in Tunisia with a Tunisian passport and a Tunisian mother tongue). These themes are referenced throughout her work, with particular nods to Tunisia’s political strife and its LGBTQ community as well as Deena’s time spent immersed in European dance music culture. As a teenager, she moved from Doha, Qatar, to Tunisia (where her family are originally from) to study fine art. “Qatar was not a country I could live in and be free,” she explains, pausing to take a long drag of her cigarette. “Doha is a completely different type of lifestyle.”

As a student in Tunis, the country’s capital city, she observed the clashes between the people and the Tunisian government first-hand during the country’s revolution, which came to a head in 2011. “I was involved with the protests, alongside hundreds of thousands of Tunisians, young and old,” she says. “It was something we all cared about, all believed in.”

One unforeseen side effect of the revolution, which would eventually topple the government, was sites like YouTube becoming uncensored. Suddenly Tunisians found themselves exposed to a universe of club sounds via the internet. Genres like electro came into favour, and through live streams and other music platforms people were able to discover a wealth of new material. “The club scene was there before the revolution,” says Deena. “But it was bad: clubs were for tourists and the music was really old-fashioned”. Discovering sub-genres like Brazilian baile funk, South African gqom or Angolan kuduro inspired Deena to create her own localised, representative sound. “[They] speak to the ghetto people, everything is super-charged with emotion and humanity”, she says, her eyes lighting up. “In Tunisia, in my area, we didn’t have anything like that. And if we did it was for specific circumstances, which most of the time were very macho and didn’t speak to me as a homosexual, a woman or a young person. So I said, ‘We have a lot of rhythms, energy and Arab musicality, why are we going to house or techno to let ourselves out?’” It was then, she says, that she decided to start DJing.

“If I make hip hop or strictly techno, it will not really come from the heart"

She linked up with collectives like World Full of Bass and Arabstazy, and honed her craft as part of Tunis’ small but dedicated dance music community. As a DJ in the city, she had to appeal to venues and clubbers despite existing outside of the more popular realms of house, hip hop or funk. And she did. One venue in particular, Le Plug, began booking her for its Thursday night party, which focused on ‘whatever music wasn’t house and techno’. The since-closed spot (“It was about two hundred capacity, not cosy, just intimate with cool energy”) sat beachside at La Marsa in the Tunis suburbs. With a bright white exterior, vaguely baroque-esque architectural structure and large windows facing out into the sea, Le Plug was also open to experimentation. “The guy in charge of artistic direction was into techno, a lot of techno, but was open to other genres,” Deena recalls. “I would play on Thursdays because it was more breakbeat, dub kind of music. Little by little, because of this club, people were actually going out on Thursdays more than Fridays and Saturdays.”

These days she’s more associated with industrial-scale techno raves than Thursday nights of broken beat by the sea. But as Deena’s adapted and grown so have her interests in other genres: she isn’t strictly a techno artist, instead revelling in various techniques, tempos and trends drawn from both the Middle East and the West. As a producer, she’s developed crafty new ways to use techno as a foundation, a backdrop of sorts, to entice listeners in with the familiar while filtering in the unknown. “If I make hip hop or strictly techno, it will not really come from the heart,” she says. “I will play with the rules just to convince others to listen to me. So I chose another path. Techno, seeing as it’s 4/4 based, is a tool so I can reach those people and hopefully make them discover something they might like.” And to her, the Arab influences in her music remain clearly distinguishable. “For other people, I don’t know,” she says, sitting back in her chair to mull it over. “I try my best to make it as obvious as possible.”

How does she feel, though, about European artists taking on those influences in their own work? Well, in Tunisia she felt proud to hear her favourite artists playing Arab music. But she recognises that Arab fans born in Europe might consider it just another act of cultural appropriation. “For me, as long as long as it’s done with a good heart and with love, I praise it,” she says, tipping the likes of Acid Arab and TSVI as examples of European artists who have successfully released music with distinct Arab influences. “However, a friend of mine told me it’s not the same because you have a dominant culture and the dominated culture, so I’m still struggling between the two positions.”

In 2015 Deena moved from Tunis to Toulouse for love. In the (almost) four years since the move, her musical taste has evolved. “I’ve toured a lot, I’m always on the go and I always stay for the other artists when I play – I’m a party girl,” she says. “I’ve got into a lot more techno, hardcore techno, since being in Europe. I think I was pretending that techno would never talk to me when I was in Tunisia. When I came to Europe, I became softer.”

These varying interests are evident in her latest releases, a pair of remix EPs comprised of album tracks reworked by producers like M.E.S.H., Karen Gwyer and Ital Tek. “I feel so lucky,” she smiles at the mention of them. “I looked up to them when I was in Tunisia, and now they’re remixing my stuff. My friends were like, ‘Deena, you made it!’”

M.E.S.H., aka James Whipple, reciprocates Deena’s enthusiasm, calling the process behind his remix of ‘Tawa’ “very free”. “I get excited about new music that manages to be dancefloor-oriented while not conforming to bland ideas of what that should mean,” he says. “I appreciate that in a longer release there are all these subtle mood changes – it feels like it’s going somewhere, but it’s
not self-indulgent.”

Self-indulgent Deena is not. Her releases may stem from an inherently personal place, but they draw in aspects of her surroundings, her experiences and all the varied people and places she interacts with – wherever they may be. The same goes for her sets and her shows. The goal is to open minds and get feet moving in equal measure. Her next project, she tells us, is another EP in the style ‘Klabb’, where she’ll release another 5 per cent from her vault into the world. “Maybe I’ll try and make something more DJ-friendly,” she says, with a smile.

Lotic is the sound and spirit of experimental dance music
object blue in The Lab LDN
PAN: How Bill Kouligas and his clubland cohorts built an experimental empire
Get the best of Mixmag direct to your Facebook DMs