There’s no better time to wonder whether or not you’re claustrophobic than when descending 64 metres deep down an enclosed mine shaft, by staircase, with people you’ve only just met. Depth-wise, Krakow’s Wieliczka Salt Mine can fit the Eiffel Tower and then some, but we’ll only be travelling to a total depth of 135 meters. There, in a grand ballroom made entirely out of salt, Mixmag and hundreds of other Unsound attendees will watch performances by Brutaż’s RRRKRTA, Colombian artist Lucrecia Dalt, and legendary composer Terry Riley, accompanied by his son Gyan.

Once down the stairs it’s almost possible to forget that you’re far underground, save for a chilly draught that follows our group around the maze-like corridors. Often referred to as the “underground salt cathedral of Poland,” Wieliczka’s many chambers include several beautiful chapels, hand-chiselled statues, and a blue-lit lake filled with murky salt deposits. Finally, at the end of the tunnels, under enormous chandeliers and benefitting from the warmth of a critical mass of bodies in a room together, Lucrecia Dalt’s electro-acoustic compositions reverberate through the air.

At this point Mixmag has been in the mine for roughly four hours, and it’s hard not to think about dystopian strains of young adult fiction in which societies are forced to live underground. Dalt’s performance, thankfully, reframes this train of thought: would living underground actually be so bad? The former geotechnical engineer’s live set draws heavily from this year’s album on RVNG, ‘Anticlines’, which uses echoey vocal poetics along with ricocheting thumps and pulses to manifest its own conceptions of space, weight and time. “It felt more as a slowing/a sudden nothing of velocity/passing from air into water, into honey, into tar,” Dalt muses calmly, and 40 storeys deep under the Polish countryside, we understand what she means. 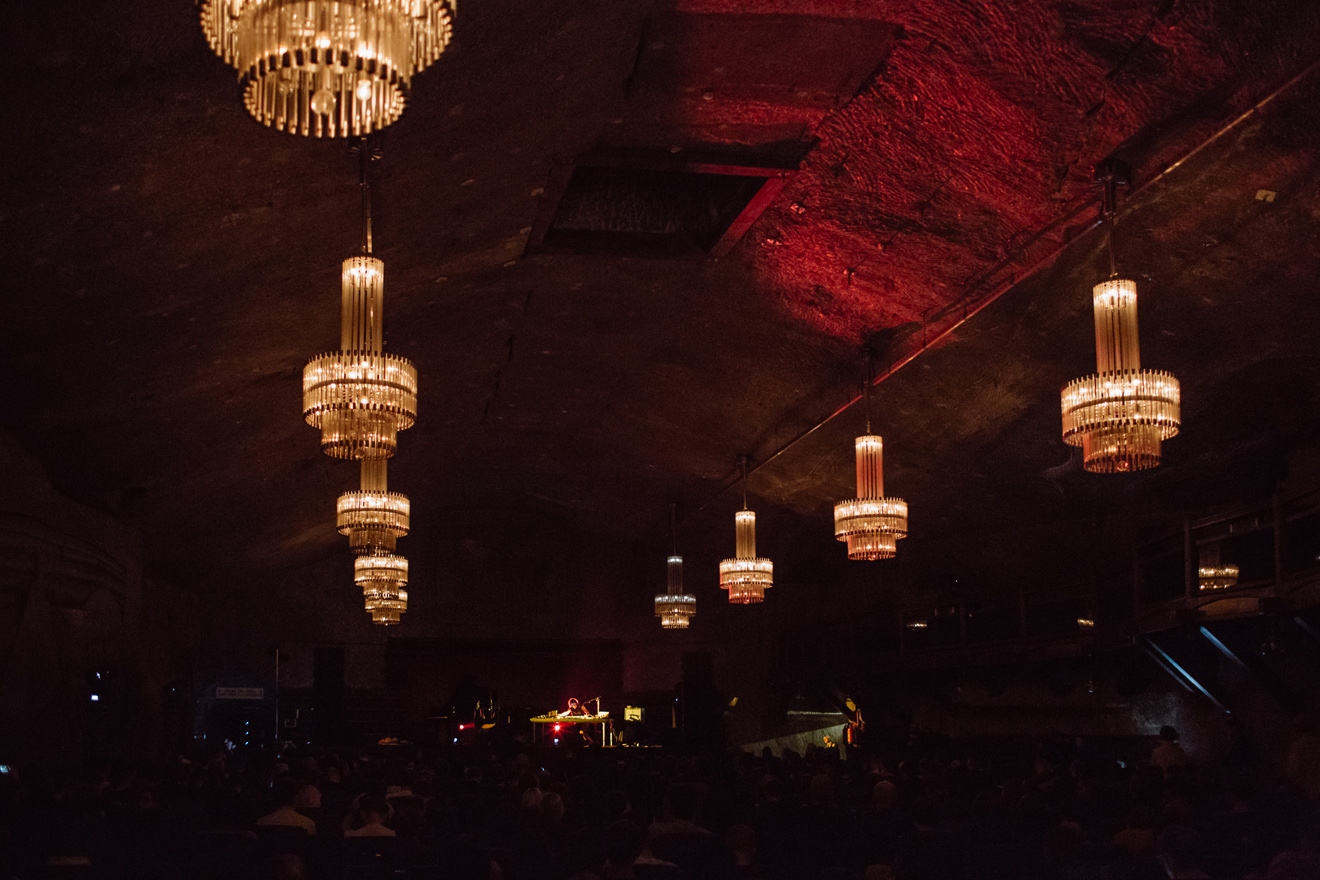 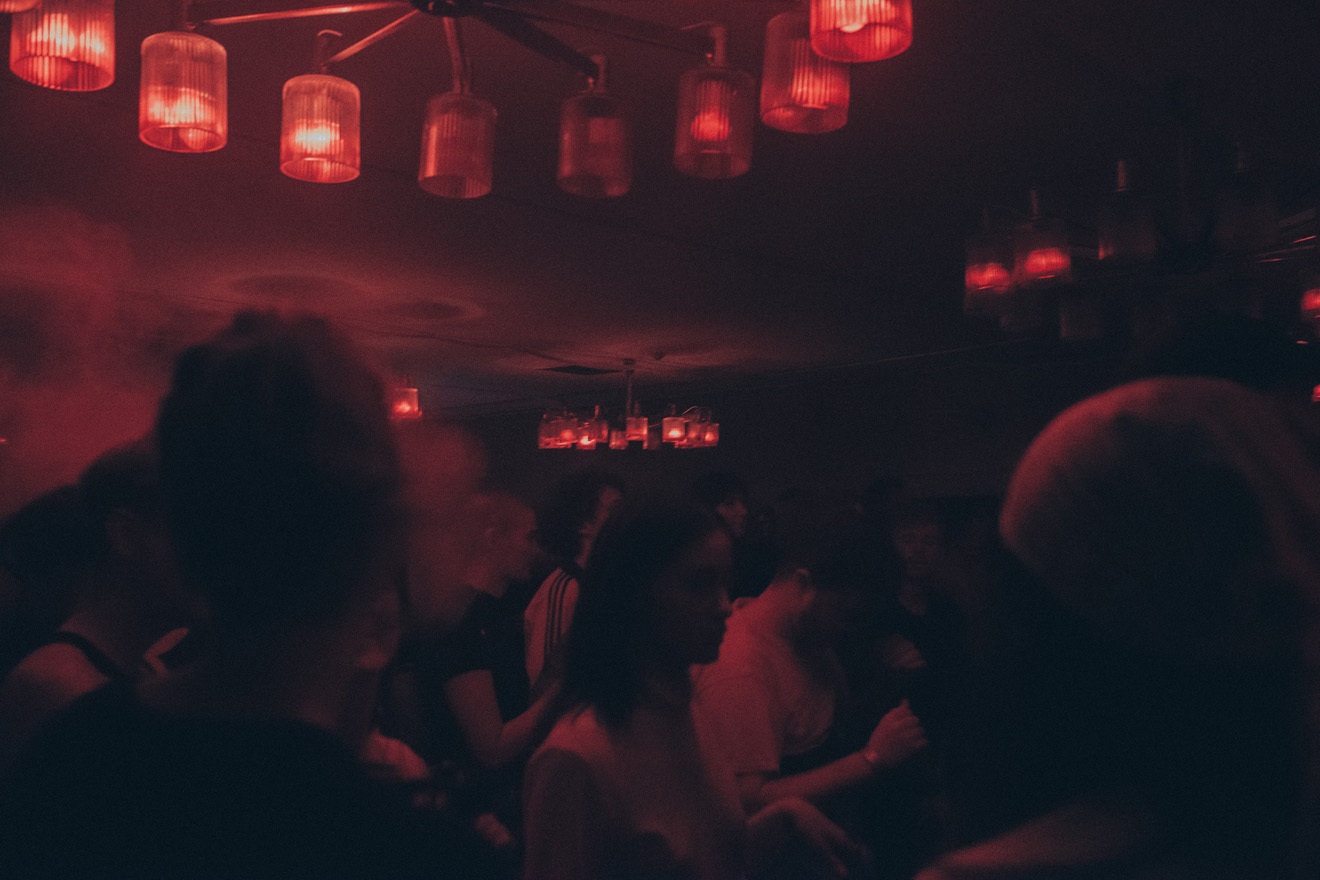 This year, Unsound has organised its programming through the lens of ‘Presence’. Piggybacking off previous themes like ‘Flower Power’ and ‘Future Shock’, the sixteenth iteration of the experimental music, arts, and discourse festival seeks to explore the nuances of living in a time so inextricably entwined with technology, and the subsequent alternative realities created by this phenomenon. How do communities change? How does the idea of the self, of the body, become transformed?

“It’s not meant to be about some return to a nostalgic time when technology didn’t exist,” says artistic director and co-founder of the festival, Mat Schulz. “It’s rather thinking: how do we exist in this moment where there is technology, online and offline?”

Co-curator of the music program, Łukasz Warna-Wiesławski, elaborates on what this looks like over the course of the festival. “[We aim to] highlight the diversity and different backgrounds of artists. You treat them as equals in the line-up. It’s not like it’s some weird showcase; it’s like, this is music right now, this is what’s happening.”

And anything can happen within the context of Unsound. All you can do is try to take it all in, from daytime talks to cosy evenings in the bars of Krakow; from the quiet sets to the club-shattering ones. Moving all over the city, meeting new people from across the world, only returning to where you’re staying to sleep – the very way the festival is structured is an exercise in staying present. 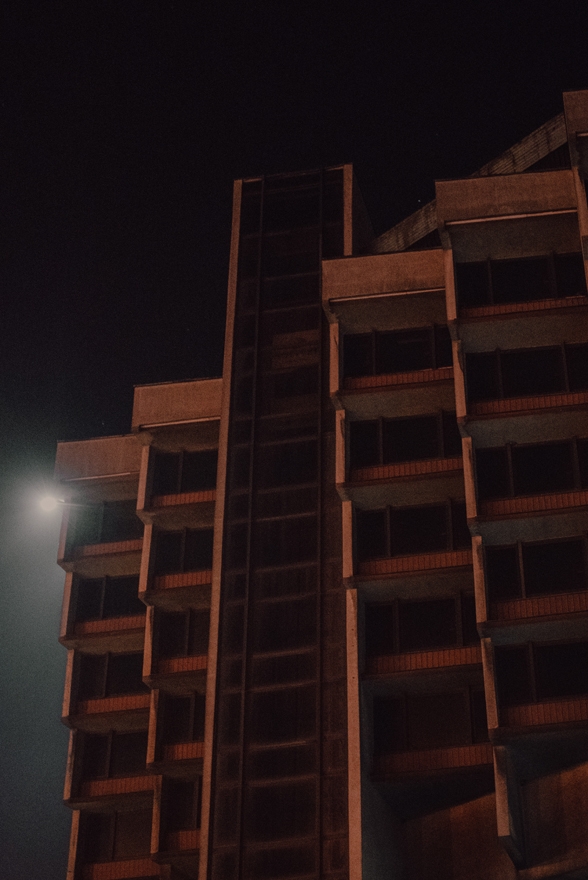 Monday night’s event at Manggha, a museum on the banks of the Vistula River, sets the tone for the rest of the week. On the heels of her PAN debut, ‘Irisiri’, Eartheater, aka Alexandra Drewchin, opens the show with harpist Marilu Donovan. Drewchin masterfully blurs the lines between vessel and substance, manipulating her vocals into powerful rushes of sound followed by hushed ambience, contorting her body as Donovan’s shadow stretches out eerily behind her on stage.

The crowd goes completely wild at closer ‘C.L.I.T.’ with its craggy, bass-heavy melody, screaming along with Drewchin: “Yeah, I rejected the culture/ do you blame me?” Though it’s not an outright rejection of ‘the culture’ per se that Unsound suggests; at Eartheater’s urging we’re all ready to abandon any sense of a status quo. 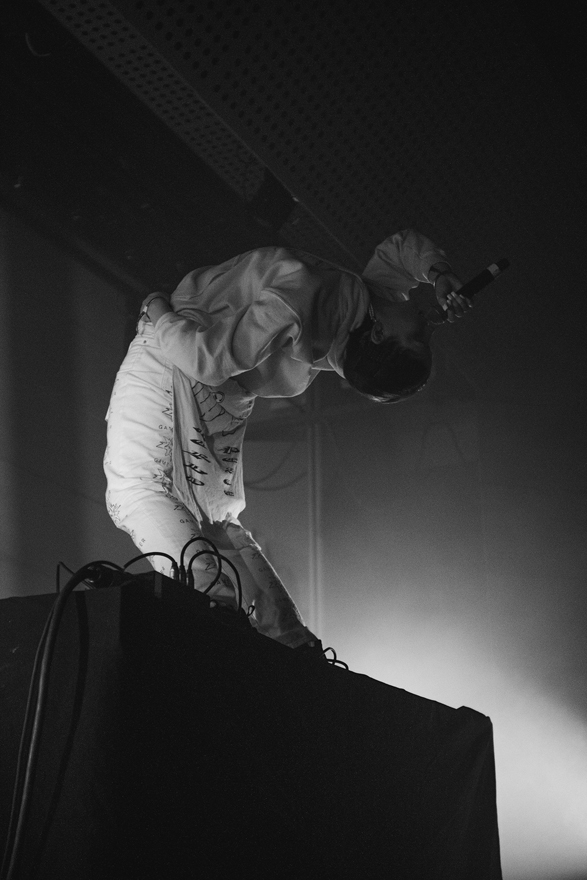 Wednesday evening sees a more abstract exploration of this sentiment, with the live debut of late science fiction writer Ursula K Le Guin and composer Todd Barton’s 1985 album ‘Music And Poetry Of The Kesh’ at the 19th century Synagoga Tempel in Kazimierz. Forget about the culture or the status quo – Le Guin and Barton constructed their own universe with ‘Kesh’, using an invented language and invented instruments. Featuring animated call and response vocals from the ensemble, eclectic percussion, and audio clips of Le Guin reading poems with Barton translating in real time, the performance brought a much-needed optimism to the notion of alternative realities. To watch Barton smile as he mouths the words along with the ensemble is a profound joy.

Ideas of collectivity flow naturally through the festival. In her artist talk, multimedia artist Camae Ayewa, who records as Moor Mother and is part of the Black Quantum Futurism collective, discusses her theory of time as a spiral, and how incorporating past histories of others into our present narratives gives a greater understanding of experience. On stage later with her free jazz group, Irreversible Entanglements, Ayewa yells amidst the frenzied arrangements: “No-one remembers right now/they are slowly erasing your memory right now/ but you remember this.”

On Friday night at the ICE Congress Centre, performance artists House Of Kenzo bring their own vision of collaborative art to the festival, sound-tracked by a DJ set from Rabit and with visuals by Sam Rolfes. Three dancers run from the stage through the crowd, at times interacting with the audience but mostly with each other, moving with unrelenting ferocity. Meanwhile, Rolfes translates the movements of a fourth dancer into a shiny, grotesque projected visual: the effect is dizzying, its components manipulating the boundaries between the body (and bodies), sensory processing, and parallel realities. 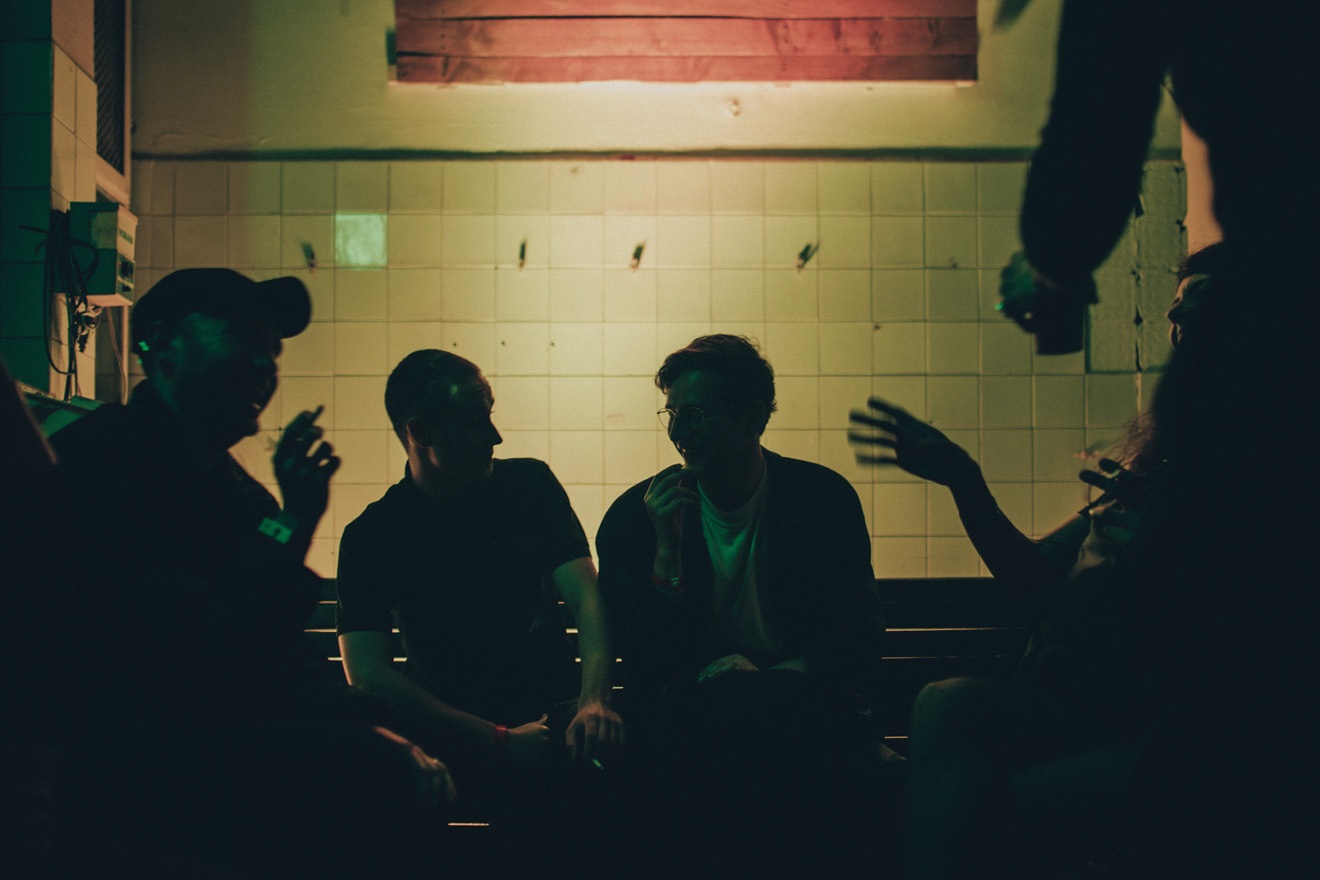 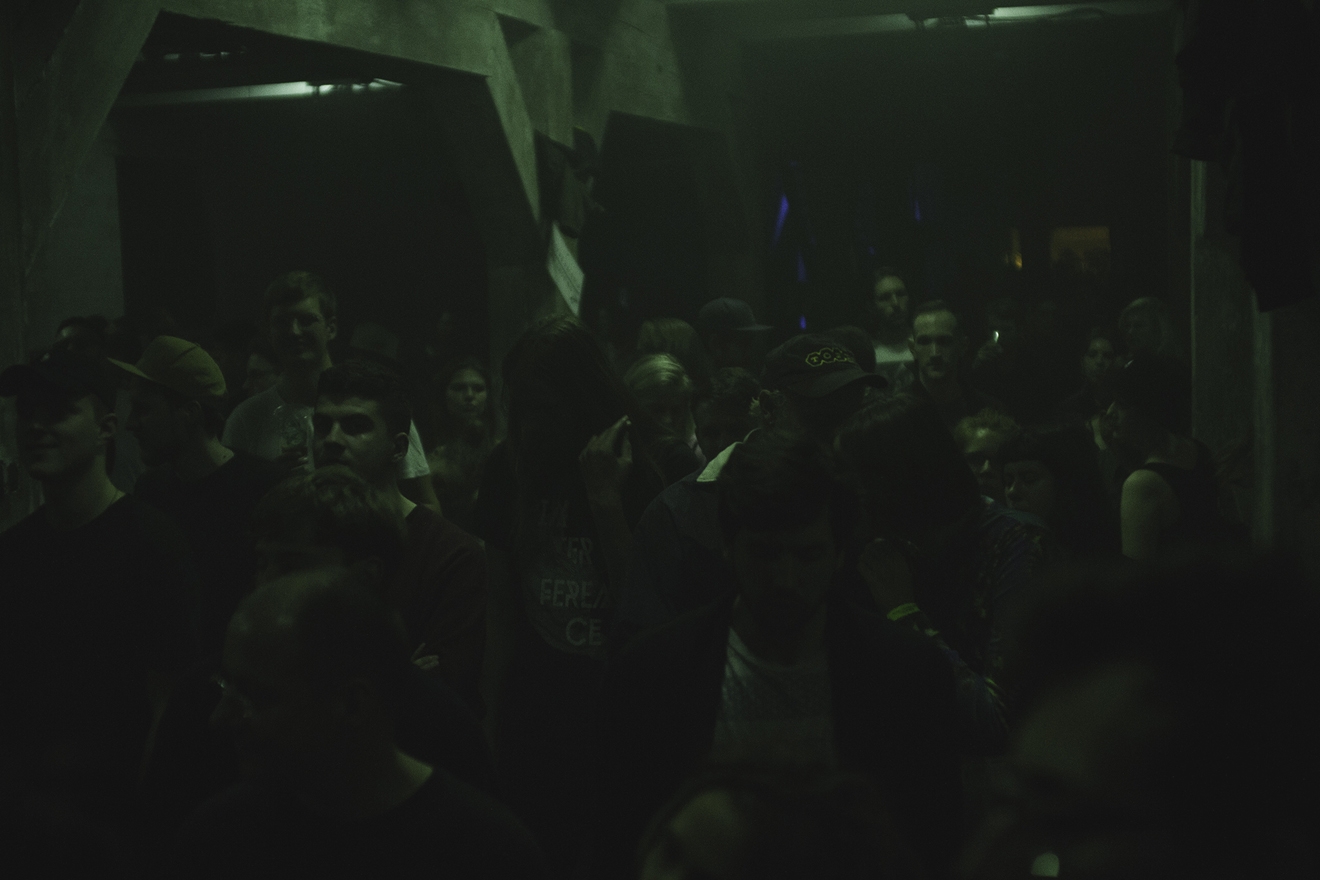 The late nights at Hotel Forum all run together in a bright blur. The former luxury hotel has been closed for business since 2002, and the side of the building is currently being used as the longest billboard in Poland. Inside, at the club nights, the majority of the acts play across three rooms: the Ballroom (a vast hall, much longer than it is wide), the Chandelier Room (low ceilings, carpeted floors and retro chandeliers), and the Kitchen (an actual hotel kitchen turned rave cave). Highlights include Deena Abdelwahed, with a live set that brings a menacing yet restrained energy to the Chandelier Room; Ziúr, DJing in the Kitchen with a characteristically raucous selection that veers from heavy metal to pitched-up TLC; Linn Da Quebrada, who gets the crowd in the Ballroom heated with her MCing, despite her early set time; and object blue in the Kitchen with a live set full of percussive chugs and piercing lasers that she only wrote that morning, inspired by the room just hours before.

At Unsound, every moment of your time is taken up by observation or personal interaction. When you’re not sitting still, you’re continuously moving your body, either at a performance or while walking the chilly streets of Krakow. It’s almost impossible to fully process anything over the course of the week; you have only what you feel and know and have accumulated at the present moment. It all makes for an incredibly vivid, albeit occasionally overwhelming experience, and one of the most creative, exciting, innovative events anywhere.