It’s 1.30AM on December 5 and a brightly coloured sea of ravers are crammed into the corner of a cavernous heavy goods vehicle unloading bay underneath a shopping centre in the centre of Bristol. The dancefloor is frenetic collage of different dress styles with sequins, sunglasses and gold chains mixing with camouflage shell suits, Moschino hoodies and leopard print shirts – all underneath brutalist concrete beams, silver ventilation pipes, and a huge spinning disco ball.

Despite icy weather outside, the crowd are bathing in the warm guitar samples and soulful piano sounds emanating from a bulky Tannoy VQ soundsystem - as Laurence Guy plays his nostalgic house anthem, 'Saw You For The First Time', from a DJ booth inside a steel mesh cage. Minutes later, the whole crowd is bouncing in unison and ravers at the front are beating their hands on the cage, worked up into a frenzy as Guy mixes in the understated, irresistible groove of 'Dope' by the Berlin-based house producer Butch.

A hundred yards away in another part of the vast subterranean warehouse, the house and electronica explorers Kassian are unleashing a thumping machinic acid line through two giant towers of Funktion-One speakers that flank another elevated DJ booth.

When the Bristolian party crew Alfresco Disco released 2,500 tickets for this event it sold out within days despite the line-up remaining secret. 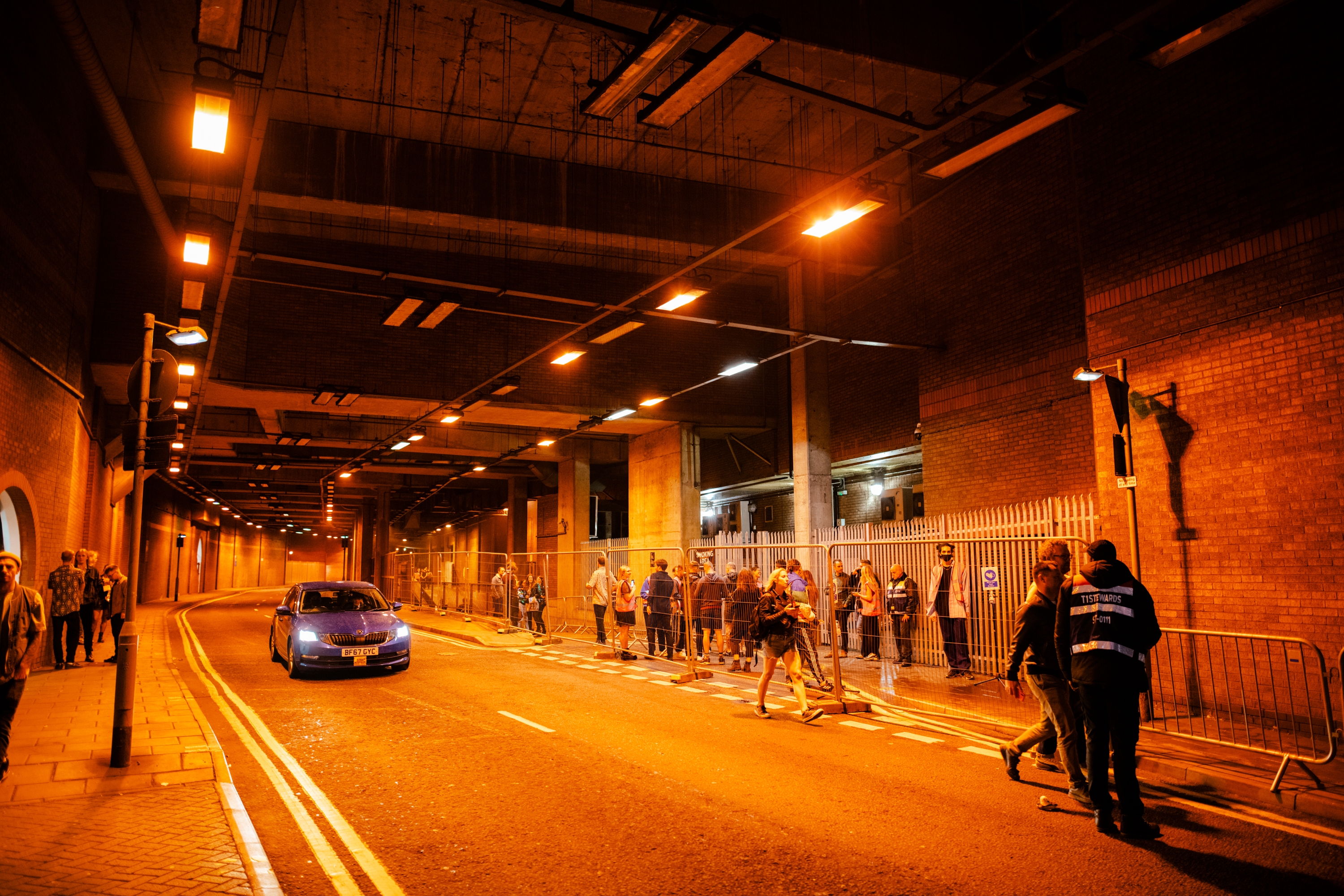 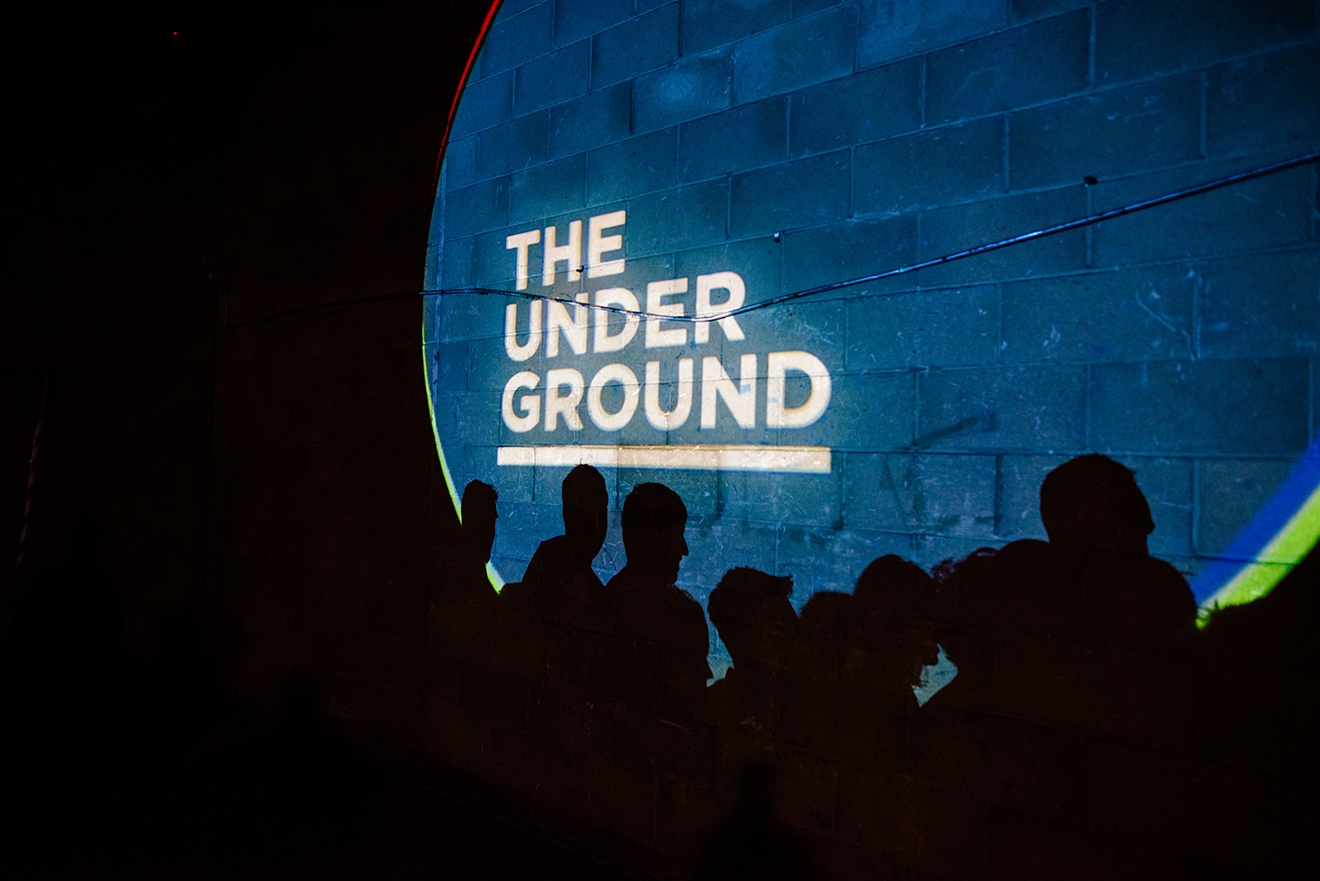 Alfresco’s ability to effortlessly sell out parties is testament to its stature as a Bristol institution and its consistency in putting on exciting and unpredictable raves year after year for almost two decades.

After setting up Bristol’s iconic house night Buoyancy in 2003 some of the Alfresco's founding members — that includes Justin Gettings, Tom Hodgson, Luke Turner, Victoria Holden, and Frankie Mann — went on to put on their first illegal rave in the summer 2004.

“That original rave in 2004 was an unexpected success,” says Luke Turner. “It was a free party by the river in an industrial part of Bristol and thousands of people turned up and really liked it – but at the time it didn’t have a name.

“We were putting on these raves once a year every summer and people started referring to them as ‘alfresco discos’ – it wasn’t really a name that we chose.”

Read this next: The inside story of Castlemorton — history's most infamous rave

In 2009, the Alfresco crew started putting on legal parties at licensed locations as a way of being able to hold events throughout the winter, but it kept many of the key ingredients from its original unlicensed events. These included releasing the location details at the last minute, keeping the line-up secret, and the use of buildings that aren’t established clubs or venues.

The first licensed party Alfresco put on was in Bristol’s abandoned coroner’s court with decks in the judge’s booth and techno in the holding cells in the basement. Since then, it has held raves in dozens of previously unused venues, including an abandoned fetish club, a church, a leisure centre, a stately home, a tunnel, and an abandoned Royal Mail building. 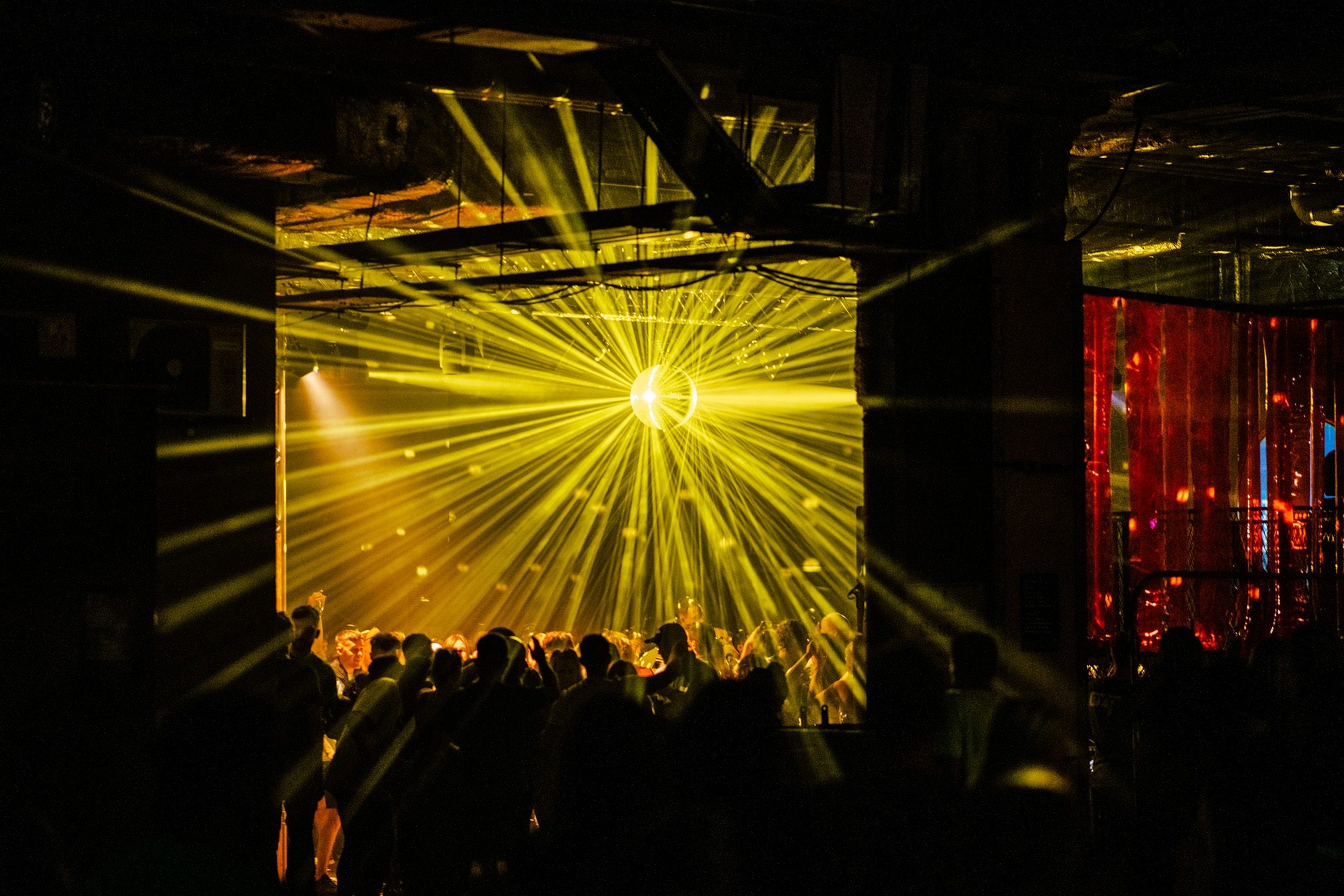 Out of all of the venues it has used in the past, the huge concrete warehouse space used for its latest parties ranks amongst its most impressive, according to Luke.

Alfresco Disco first approached The Galleries shopping centre with a proposal to put on an event in the building more than six years ago, but it was only recently, amid the decline of the high street and increasing shop closures, that the shopping centre’s management became interested in potentially using part of the building as a venue for music events.

“We had seen the lorries driving down the tunnel into the basement below The Galleries and imagined potentially putting a soundsystem in there – but we had never seen inside,” said Luke. “When the manager took us down into the underground warehouse in a rickety metal goods lift and we stepped out for the first time we were blown away.

Read this next: How oppressive policing has eroded rave culture

“The interaction between architecture and music has always been important to us. When we saw such a huge underground space it was a pinch yourself moment.”

Alfresco has now put on two events in the underground warehouse, the first being its initial post-lockdown event on August 7, and it is already planning to do larger events in the space in the future.

“We’ve already applied for a license for a bigger event in the warehouse and we are hoping that party will take place next year,” says Luke. “The upcoming events will potentially use areas of the underground warehouse that haven’t been open in previous parties.” 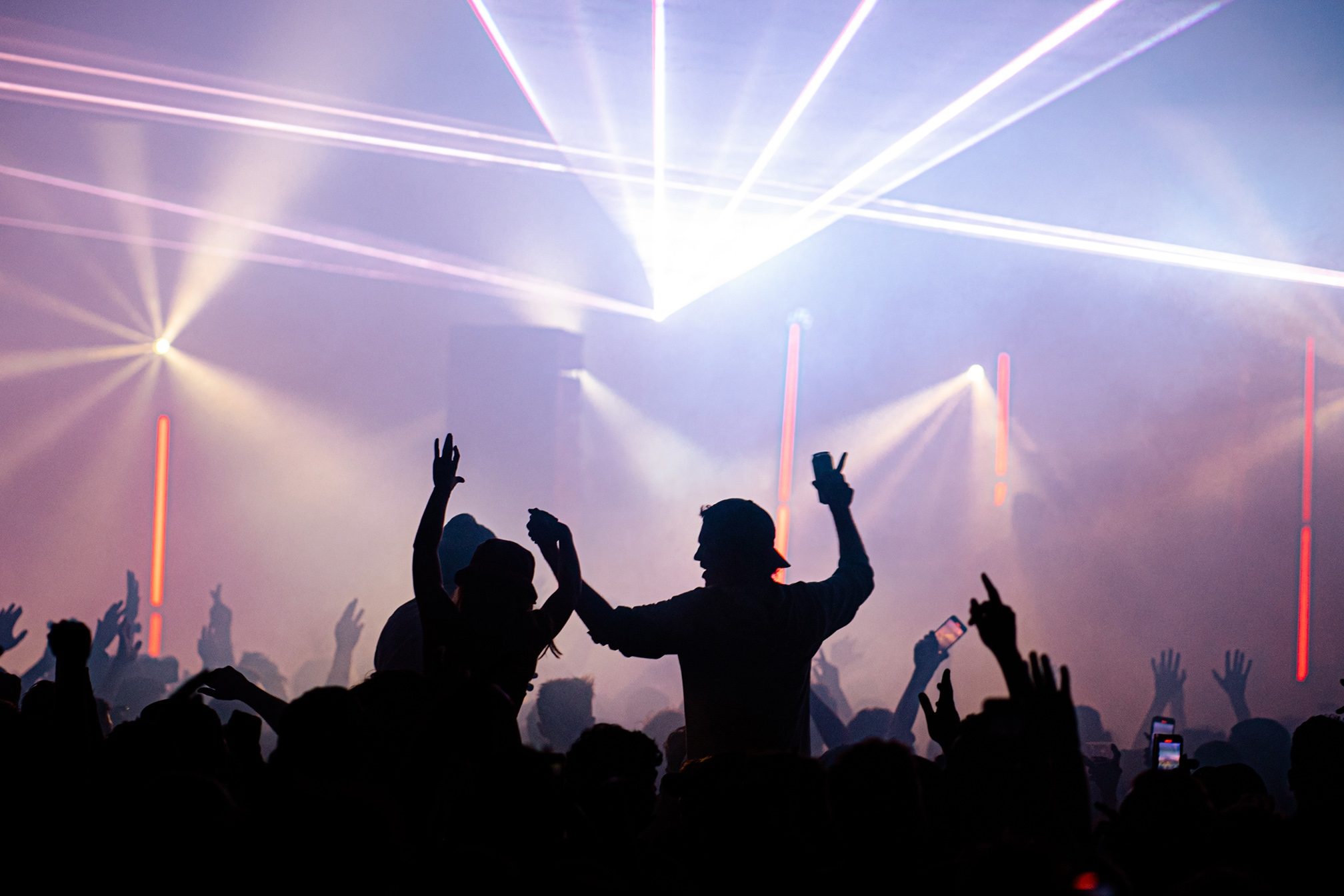 In terms of the scale and industrial feel of the building, there are clear similarities with other established electronic music venues in the UK, such as Manchester’s Warehouse Project and London’s Printworks – but Alfresco’s stripped-down DIY style gives the night a rawer vibe. There is no cloakroom; bags and coats are hung haphazardly on walls and railings next to the building’s makeshift dancefloors.

Rather than using complex décor for the event, the interior of the unloading bay is presented relatively unchanged, with lights and lasers positioned to highlight existing features of the building like turbines and geometric patterns made by its concrete columns and walls.

As the night progresses, ravers take breaks from the dancefloors outside the dramatic rectangular tunnel that is normally used by lorries entering the underground warehouse to unload stock for the retail centre’s shops.

While the fundamental sound of the night is built around is house and disco many of the sets weave through multiple genres.

During Laurence Guy’s two hours behind the decks he works through disco and soulful house before setting off a couple of drum 'n' bass floor fillers by High Contrast and Marcus Intalex at the end of his set.

“People are always very open and receptive to different sounds at Alfresco events,” says Guy after his set. “Partly it’s because of the crowd that they have cultivated over the years and partly because the parties are not in established venues that have particular pre-existing associations.

“Usually, most people won’t have been inside the building before, so everything feels a bit more novel and exciting.” 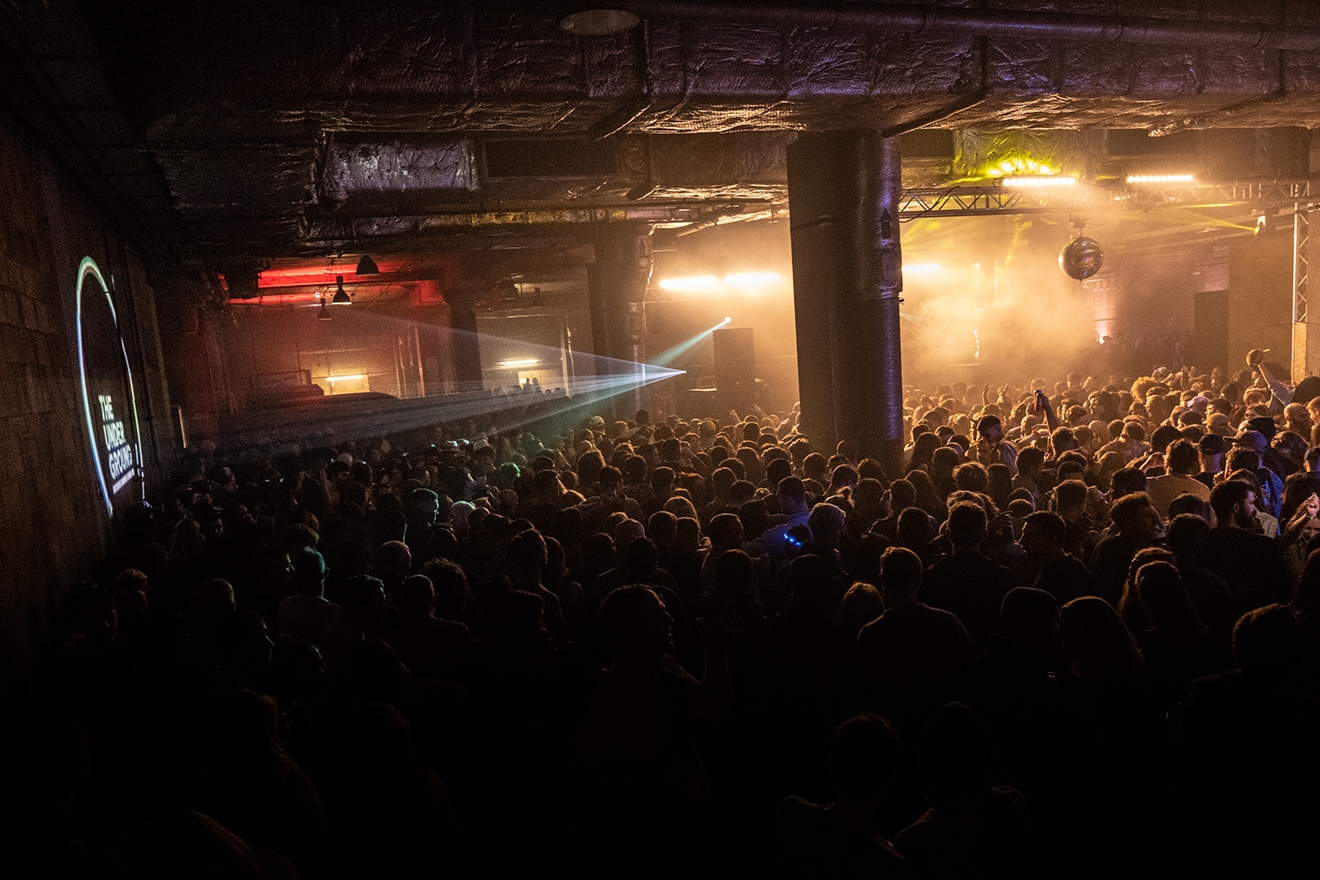 Joe Danvers from Kassian agrees. “The first time I played for Alfresco they asked me to DJ techno in the weightlifting room of a leisure centre and there were pictures of Arnold Schwarzenegger and Sly Stallone all over the walls,” he says. “There were bars in the squash courts and there was less than two hundred people in the room I was playing in. It was totally surreal, but an amazing atmosphere.

“Luke and the rest of Alfresco are literally pioneers in terms of going into spaces for the first time and seeing the potential for putting a soundsystem somewhere that no one has had a party before.”

According to Joe, another one of the reasons for Alfresco’s success has been its ability to build a community around its events.

“The events have a unique positive vibe,” he says. “As well as the older crowd, who have been following them from the very beginning, the events attract the younger generations as well – who know they are going to hear fresh, interesting music.

“Alfresco doesn’t just stick to the same names – they are always presenting something on the cutting-edge.” 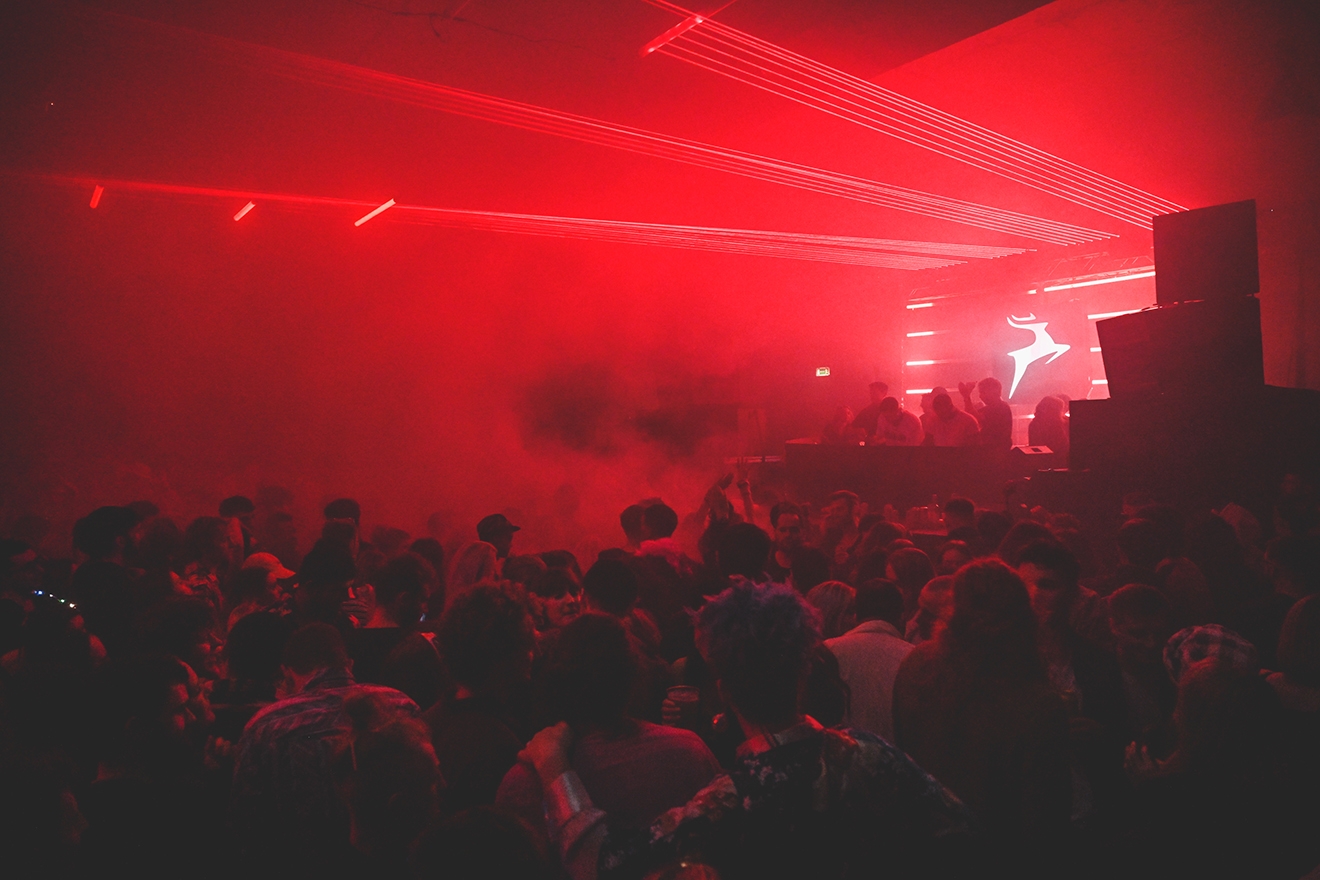 At 2:AM the NTS Radio resident and On Loop label boss, Moxie, takes control of the towering Funktion-One soundsystem. The music gradually speeds up as her set progresses, transitioning through a range of styles and flavours including garage influences, Latin breakbeat, and bass-heavy techno sounds.

During the two-hour set she showcases unreleased tunes that later drop on the first volume in a series of 'On Loop - Various Artist' compilations. These include records by the Dutch DJ/producer Nachtbraker, Wales’ Gallegos, and Equador’s Nicola Cruz.

90 minutes in, Moxie drifts into thundering jungle for a couple of tracks and sparks shouting and raised hands from the crowd as she drops the pounding 'Death Rattle' by Philadelphia’s LSDXOXO. Red lasers and 50 programmed neon tube lights flash across the high ceiling as cascading drums and the chopped, sped-up vocal sample from Mr. Vegas' 'Heads High' causes chaos on the dancefloor.

“I love a venue like this,” Moxie says after her set. “It reminds me of the old warehouse parties that I used to go to in Shoreditch, before that area was really commercialised.

“Cordy House, where FWD>> put on a lot of really early dubstep raves, had a similar vibe.

“It was so amazing seeing Skream and Benga doing their classic back-to-back dubstep sets there, so I have a really nostalgic attraction towards DIY venues like this.

“It’s nice to see something unconventional - and it’s fun to get lost and explore a space like this. It’s enchanting in a grimy kind of way.” 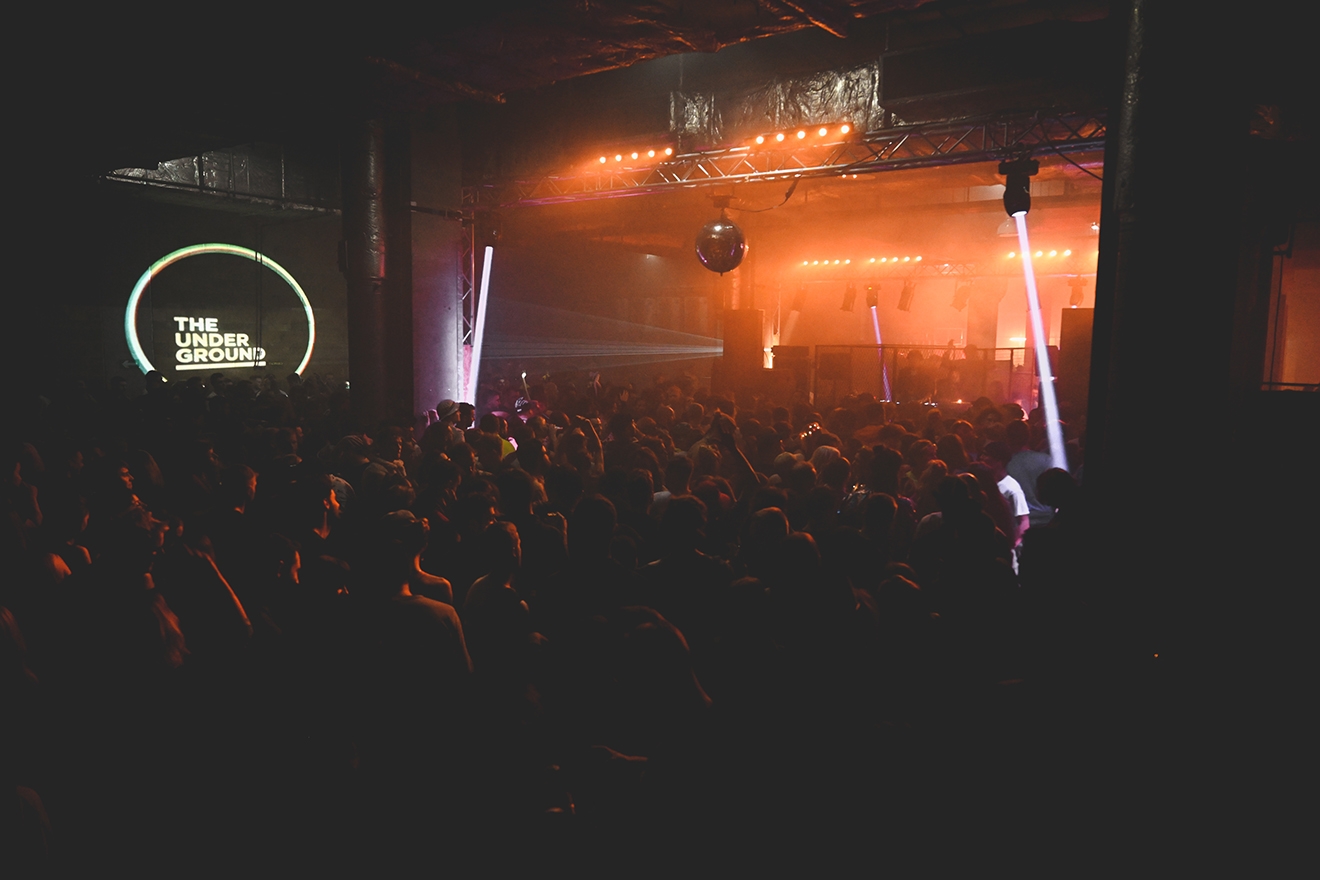 As the music is turned off and the bright warehouse lights are turned on the crowd is still clearly buzzing and reluctant to leave the building.

Outside ravers are lingering on the pavements and continuing the party in rowdy groups at the top of the tarmac ramp.

Amid the chatter, there is a sense that this recently discovered subterranean space could become much more than a pop-up venue and may ultimately become a key location for electronic music in England’s South West.