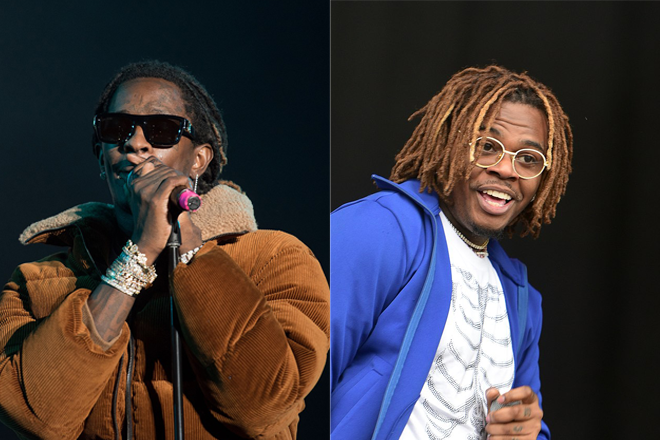 US rapper Young Thug has been arrested on suspicion of involvement in gang activity and a number of other alleged offences.

In total, 28 YSL Records label (known as both Young Stoner Life or Young Slime/Slatt Life) affiliates, including Gunna, have been indicted in a 56-count indictment.

Young Thug and Gunna are both facing charges of conspiring to violate the Racketeer Influenced and Corrupt Organizations (RICO) Act as part of the grand jury indictment of Young Thug's YSL collective.

Read this next: Hip hop stars are fighting to ban the use of rap lyrics as court evidence

JUST IN: @youngthug booked into @FultonSheriff on charges of Conspiracy to Violate the Racketeer Influenced and Corrupt Organizations Act & Participation in Criminal Street Gang Activity. He will make his first appearance on Tuesday at 1130 am. @wsbtv pic.twitter.com/LRSeus8Lsc

Young Thug, whose real name is Jeffery Lamar Williams, was taken into custody on May 9 after the property he was at was raided. He is now being held at Fulton County Jail.

According to The Guardian, the indictment document, explains that he is also accused of threatening to kill a man at a shopping mall; renting a car that was used during the murder of a man in 2015, and intending to distribute methamphetamine. However he has not been charged for these individual offences, which are described as “overt acts” that furthered the broader criminal conspiracy.

Gunna, whose real name is Sergio Giavanni Kitchens, has reportedly been charged with one count of conspiring to violate the RICO Act.

Other members that have been indicted include, Yak Gotti, PeeWee Roscoe, and Thug’s brother Unfoonk.

Read this next: Kanye West is being sued for sampling pastor on 'DONDA 2'

The indictment defines YSL as a “criminal street gang” which were founded in 2012 with a connection to the Bloods.

A named victim of the indictment is rapper Lil Wayne who claims that the YSL shot his tour bus in 2015.

The 88-page indictment notes Thug’s rap lyrics as an “overt act in furtherance of the conspiracy”. Gunna’s lyrics and YSL jewellery have also been included.