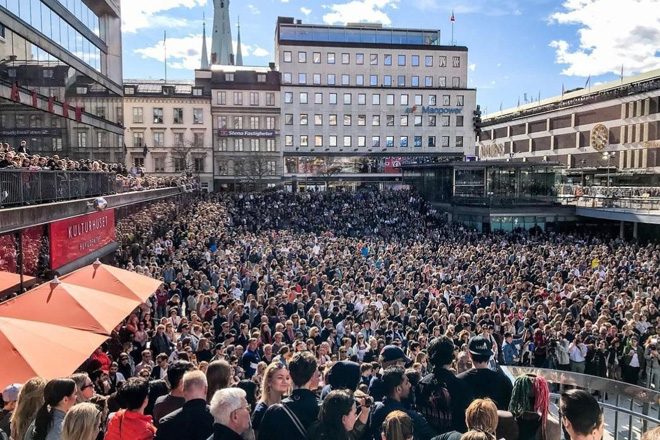 A huge tribute was held in Sweden on Saturday to celebrate the life of Avicii.

The 'Avicii Tribute' event, which took place in Sergels torg in Stockholm, was set up shortly after it was reported the producer had passed away.

Throughout the day there was a minute's silence, speeches from friends and figures from the music industry and playing of his tracks such as 'Waiting For Love' and 'Levels'.

He said, "One day you'll leave this world behind so live a life you will remember."

Stockholm the day after..thousands of people turned out in Sergels Torg for a public tribute to #avicii, singing and dancing along to the biggest hits of his career.. It's all about Love pic.twitter.com/okbvQOjtYs

Avicii was found dead in Muscat, Oman last Friday, but post-mortem examinations showed that there was "no criminal suspicion". His body is due to be flown back to Sweden this week.

DJs such as deadmau5, Carl Craig, Flying Lotus, Diplo and The Black Madonna all paid tribute to the artist over the weekend.

Read our piece on how Avicii turned electronic music into a global phenomenon. We also charted his legacy here.