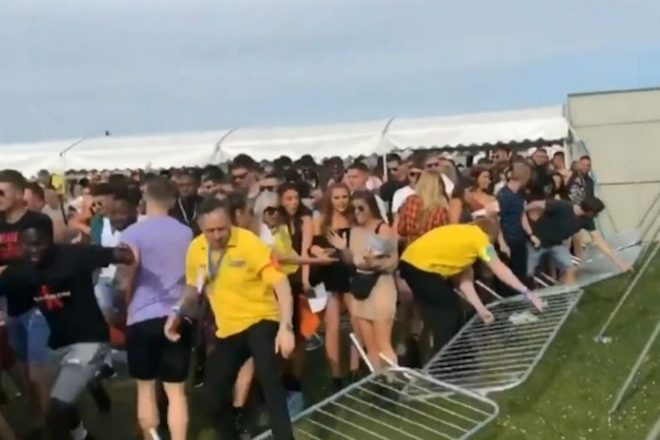 A stampede reportedly hospitalized numerous attendees of We Are FSTVL last Saturday.

After waiting in line for several hours at the festival entry gate, hundreds of festival-goers toppled barricades and fences to enter the event. The mass of bodies trampled a number of their fellow patrons in the process, while evading a slim security detail that was visibly overwhelmed by the surge.

The summertime heat and long wait times caused the panic, after the box office reportedly closed the entry gate due to a lack of wristbands. Without readily available hydration stations for those in queue, numerous patrons reportedly vomited or collapsed before people rushed the front gates.

According to BBC Radio 1 Newsbeat, an unnamed attendee claims witnessing multiple people vomiting in a fenced-off area, before another attendee threw a barricade into the crowd, injuring a woman next to them.

While speaking to The Sun Online, 30-year-old Chloe Nichols was hospitalized after being struck by a barricade and crushed by the stampede. She suffered a gash in her leg before waiting nearly half-an-hour to be seen by medical staff. She received six stitches for the injury. Nichols went on to say, “I was in so much pain, I thought I was going to die.”

After arriving at the hospital, one of Nichols nurses claimed that at least eight other patrons had come in with injuries from the festival.

21-year-old Renardo Henry saw people collapsing from the heat, the BBC reported: “We were in the queue, four people had collapsed around us, people were throwing up and shouting for medics, all the staff were doing was throwing water bottles into the crowd of people.”

Henry went on to say the crowd became a bottleneck: “Everyone at the back of us was just pushing towards us. I turned around to see my friends getting crushed by other people. People were coming out of there crawling and crying because they’d been trampled on. It was ridiculous and all the security was doing was trying to push people back.”

In a public statement, festival organizers said, “Due to unforeseen technical difficulties at the wristband exchange, customers had experienced longer waiting times and for that we apologise. Security were able to overcome these issues and barriers were quickly reinstated.”

The three-day, weekend festival held in East London, near Upminster, featured acts like Dubfire and Groove Armada, among many others.


View Tweets that reveal the stampede and aftermath from the event below.

Safe to say @wearefstvl will never happen again
People being trampled on
Barricades thrown
Not enough medics
People pissing on others #WEAREFSTVL pic.twitter.com/ki9U7EF6wW

Thanks a lot @wearefstvl @ReeceWeAreFSTVL now scarred for life because of your incompetence and negligence. Not a single message saying sorry. I’ve been coming to we are for years. Spent so much money in there and this is the treatment we receive. I almost died as did others! pic.twitter.com/hzUweVy3Zg

@wearefstvl Lucky to be alive. Definitely have to be accountable for this shit show #WeAreFyreFstvl pic.twitter.com/XgxC4qaszB

Acceptable? I’m not too sure. pic.twitter.com/uEgUmqOhcc

A new documentary from Pioneer DJ explores the global festival scene
It's OK to be a rogue at a festival, as long as you're lovable
FJAAK selects 10 wicked tracks ahead of GATHER Outdoors Festival