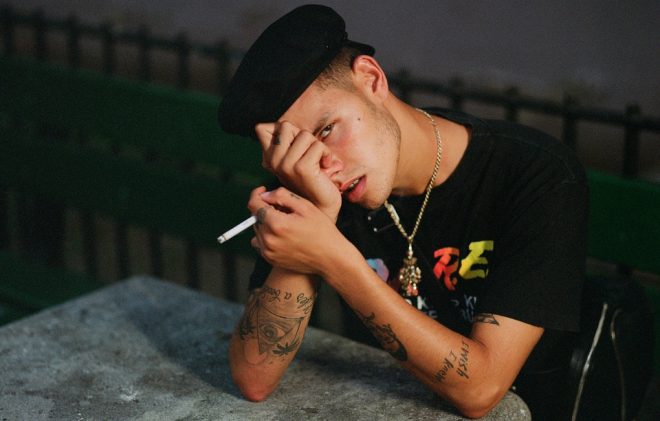 Slowthai’s highly-anticipated debut album ‘Nothing Great About Britain’ will be released on May 17.

Coming in at 11 tracks, ‘Nothing Great About Britain’ features collaborations with the likes of Skepta and Jaykae. Just last week we heard another Slowthai link-up via Flume’s latest mixtape offering ‘Hi This Is Flume’.

As one of our Stars of the Year 2018, we caught up with Slowthai back in December to discuss his musical journey so far. "It’s called ‘Nothing Great About Britain’ and I want it to [include] all the experiences you would have growing up here,” he said, discussing his upcoming album. “It’s every vibe that this country has to offer, and not just one side of the coin."

“I’ve got to set an example to everyone who connects to me,” he continued. “I’m trying to better myself so I can show people who have felt lost or have felt like they don’t belong in this society that they can be anything they fucking want to be. The album is about bringing all these different people together and showing that even though we come from different walks of life, we’re not so different.”

‘Nothing Great About Britain’ lands on May 17 via True Panther/Method. Check out the album’s artwork below and pre-order here.

Read this next!
These are the Stars of the Year 2018
Mahalia and Slowthai are nominated for the BBC Sound of 2018
Slowthai shows off his dedication to 'Ladies' in new music video

THANK YOU FOR YOUR TIME AND CONTINUED SUPPORT I LOVE AND APPRECIATE YOU ALL... NOTHING GREAT ABOUT BRITAIN 🇬🇧 the ALBUM coming MAY 17th 2019. pre-order it here → shop.slowthai.com [LINK IN BIO] the track GORGEOUS taken from the album is OUT NOW and available on ALL streaming platforms, itunes, amazon, google etc I hope you like it