Rave The Vote had its inaugural edition on July 24, and has been set up as a voter registration and fundraising drive for the Movement for Black Lives in response to the upcoming US elections in November and the ongoing Black Lives Matter protests.

Set up as a collaborative project by DJ duo Soul Clap, Infamous PR, 2+2 Management and Lost Resort TV, Rave The Vote aims to get the North American dance music community to rally around a common cause and create meaningful change.

Rave The Vote will be broadcasting the next episode of their online streaming festival on August 14 via Lost Resort TV’s Twitch channel from 8pm - 8am BST.

The next edition on August 14 will feature sets from DJ Deeon, Inner City, Ardalan, DJ Heather, and many more.

There will be two further editions of Rave The Vote on September 11 and October 2. Its first episode in July featured sets from Ash Lauryn, DJ Spinna, Louie Vega, Seth Troxler and Venus X.

RSVP here and tune in at 8pm BST. Check out the full lineup for August 14 below. 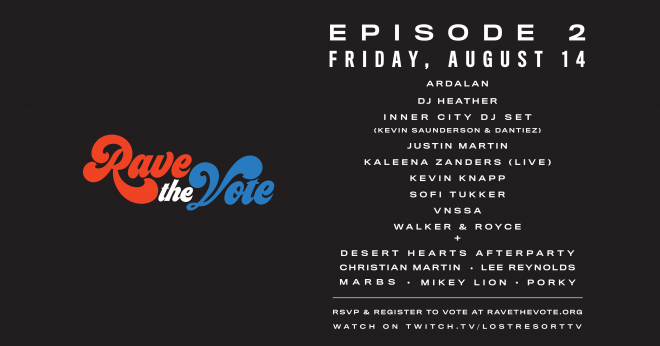