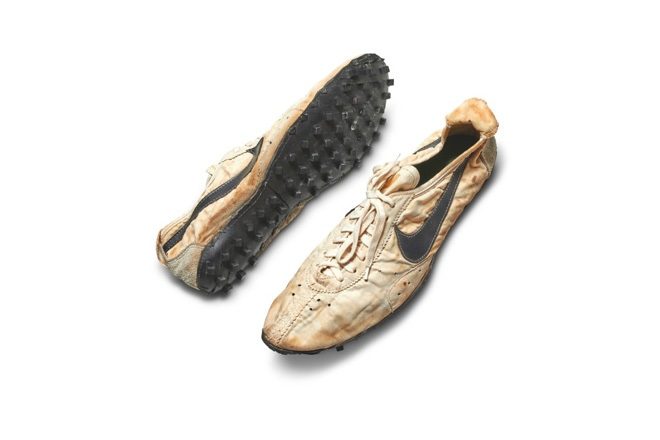 A pair of Nike Waffle Moon Shoes, designed by the sportswear giant’s co-founder Bill Bowerman, have sold for a record-breaking $437,500 (£351,772) at an auction Sotheby's in New York.

The previous highest price a pair of trainers has ever fetched is $190,373 in 2017, for a pair of signed converse worn by Michael Jordan in the 1984 Olympic basketball final. This has now been eclipsed by more than double, despite estimates prior to the auction placing the Moon Shoe’s value at $160,000. Only 12 pairs were ever made, initially designed for athletes at the 1972 Olympics.

Candian collector and investment firm Peerage Capital founder Miles Nadal is the happy. He also paid out more than $850,000 for the other 99 pairs of shoes on sale at the auction, with his haul including limited edition trainers by Adidias, Kanye West and two pairs of Nike Mags, which famously featured in 1989 film Back to the Future Part II and came to market in real life nearly thirty years later.

Nadal said he is delighted to own a "true historical artefact in sports history and pop culture", adding that he thinks “sneaker culture and collecting is on the verge of a breakout moment”.

He plans to display all 100 pairs of shoes at his private museum in Toronto.

Sotheby's is auctioning off rare trainers by Nike, Adidas and Kanye West
We turned your favourite album covers into Nike sneakers
Nike drops a new line of "techno-inspired" Air Max 180
Get the best of Mixmag direct to your Facebook DMs