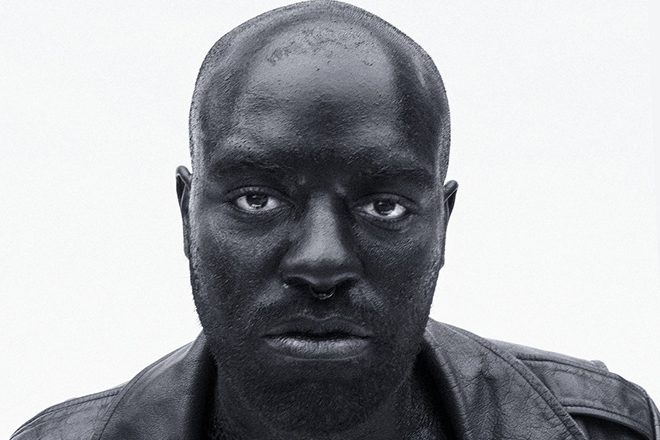 R&S has terminated its contract with Eddington Again, after the LA-based artist published emails in which founder Renaat Vandepapeliere responded dismissively to criticism raised about the label’s silence on the Black Lives Matter movement.

Eddington Again wanted their contract to be terminated due to “receiving incorrect splits on late royalty statements” relating to the release of the ‘Damani3’ EP on R&S sublabel Apollo Records in June, 2019, and said they had asked “numerous times” for the label to release them from the contract, but R&S would not agree to do so.

Last week Eddington Again published emails of a conversation they had with Renaat Vandepapeliere taking issue with the imbalance of women and Black artists on the label compared to white men.

In response Renaat writes: “We are not a political party” and “I sign music I can find - I don’t sign color mate”.

Eddington Again also raised their offence at the label’s silence over the Black Lives Matter movement as an artist “stuck in a contract on your label”.

Renaat also references a new artist the label is planning to work with, writing: “I hope that I have now found a full pure breed black artist that I can spend my life with in full focus”.

Eddington Again responds: “Renaat R&S has been since the 80’s and your telling me this is the first time you’ve found a black artist that you want to focus on? What does pure black mean? That sounds creepy as fuck lol.”

As part of a longer statement to Mixmag, Eddington Again added: “The fact that Renaat breeds horses and even has one as the R&S logo made this comment extra disgusting.”

As part of a longer statement sent to Mixmag, the Belgian label said Renaat's comments "in no way represent the views of Apollo Records and R&S Records”.

The full email transcript can be viewed at the end of this article.

After publishing the screenshots of the emails on social media, R&S got in contact with Eddington Again to agree to terminating their contract, but with a condition that the artist takes down the social media posts (see below).

R&S has now removed ‘Damani3’ from streaming platforms, but Eddington Again says the IRSC codes needed to re-upload the music and retain its streaming figures has not been provided to them.

On Instagram, Eddington Again wrote: “It sucks that it was getting about 1k plays a day from fan based playlist and was only 3k away from my first million streams on anything. I’ve gone and uploaded to bandcamp for y’all cuz I know y’all love ‘Sweet’ and are gonna start complaining once you find out it’s not online lol. Sorry I can’t just stick to the music. I have values and shit I gotta observe in order to feel balanced.”

In a statement to Mixmag, Eddington Again said: "My problems with R&S started about a year and a half ago when the A&R that introduced me to R&S quit after numerous arguments with Renaat. That was the first time I realized that I needed to part ways with the label. Since then, there have been several times I've felt disrespected and disregarded by Renaat and Andy Whittaker at R&S.

“I asked numerous times for a termination letter after receiving incorrect splits on late royalty statements. Since the death of George Floyd and the global uprising for the black lives, R&S has said nothing on the matter. I've learned through experience that white silence on racial issues is ultimately violence. I asked Renaat why they would stay silent on such a subject and expressed my concern over the roster's lack of diversity. I was dismissed, told that I didn't know what I was talking about, and needed to move on.

“After multiple ignored emails and consistent disrespect, while in conversation with Renaat via email, he said quote ‘I hope that I have now found a full pure breed black artist that I can spend my life within full focus ..’. The fact that Renaat breeds horses and even has one as the R&S logo made this comment extra disgusting. On top of the blatant disregard for my concerns, this was the last straw and made me go public.

“The emails have gone viral, Renaat has failed to dismiss the comment he made, solely justifying it as something lost in translation. It's 2020– if you run a record label or work in a culture industry, you should probably be able to read the room — and yet, still no apology or accountability– just instead another attempt to silence me. Really? On top of that he has also blocked me on Instagram.

“Renaat and his team sent a termination letter after he started getting dragged but stated that R&S would only terminate the contract if I delete the post, refrain from saying anything else on the matter on social media or the press. R&S / Apollo took my EP ‘Damani3’ off streaming without notice and have yet to give me the IRSC codes to put my music back up.”

Mixmag reached out to R&S who sent a statement saying that Renaat’s “insensitive comments .. in no way represent the views of Apollo Records and R&S Records” and that Renaat will be making a public statement and apology for his comments.

The full statement says: “Eddington Again released one EP on Apollo Records in June 2019. This was the only release signed from the artist, he was not signed for any further releases due to commercial and creative reasons and we hadn’t been working with him for over one year. Recently he had asked for his EP to be removed from our catalogue but Apollo Records asked him to honour the contract he signed.

“Eddington then engaged in emails with Renaat Vandepapeliere where Renaat said some insensitive comments regarding another black artist signed to R&S Records that he will personally apologise for. These comments in no way represent the views of Apollo Records and R&S Records. We pride ourselves on our rich history of providing a platform for artists regardless of race, gender and sexuality. However we will learn from this experience and moving forward we will work harder to remove any conscious or unconscious biases in all aspects of the company.

“We sent an email to Eddington on Friday 25th September with a termination letter to so he can have the EP rights back and also started removing his music from the Apollo Records catalogue as the artist requested.

"Eddington Again has had his contract terminated and we have removed his five songs from the Apollo catalogue as he requested. Renaat Vandepapeliere will make a public statement and apology for his comments. Apollo Records/R&S Records”.

Read the emails between Eddington Again and Renaat Vandepapeliere below. 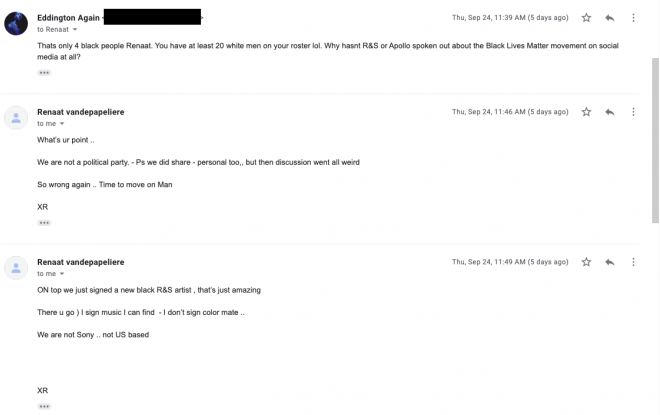 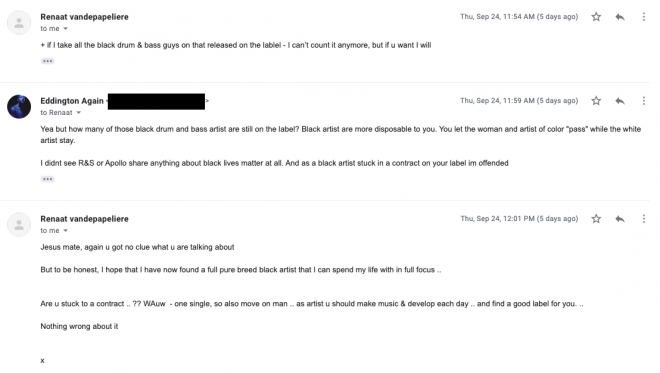 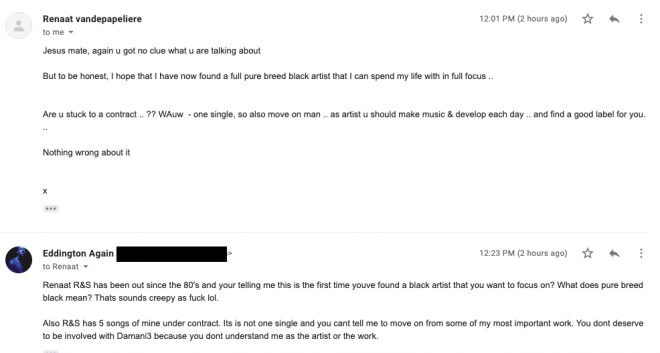