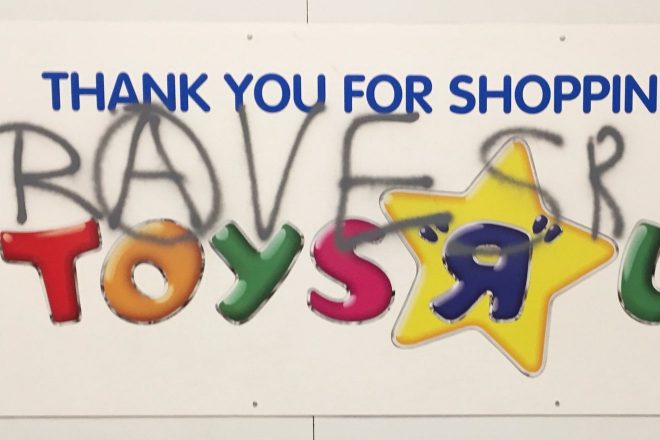 Police were called to an illegal rave at an abandoned Toys R Us store in Hounslow, London over the Easter weekend.

The toy chain’s closure earlier this year led to the store’s abandonment, which set up the perfect scene for opportunistic party people. One reveler even spray painted the sign to read “Raves R Us”, a photo of which was posted by the Met Police following the party’s closure (pictured above).

Of the hundreds of attendees only five were arrested and a sound system seized.

Police described the scene as an “unlicensed music event” and tweeted about busting up the party: "Police have closed down an unlicensed music event on Bull's Bridge Industrial Estate, Hayes Road, UB2... Sound system has been seized and several arrests made. Do not travel to this area as all attendees and ticket holders are being turned away."

In other rave related news, a recent report stated that illegal raves in London have doubled in just one year and in other areas authorities are using drones to help in their fight against illegal parties.

#ResponseTeamC and #ResponseTeamB have disrupted an unlicensed music event in #Hounslow and five arrests made. #411TX pic.twitter.com/pwHbRxKCCA