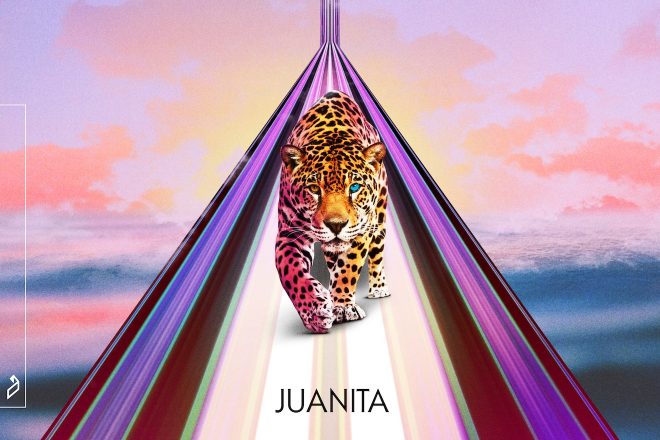 A signature spacey bass line serves as the bedrock to ‘Juanita’, the latest disco-funk anthem by Moon Boots in collaboration with vocalist Kaleena Zanders. They first became introduced during a Mixmag retreat at Allaire Studios in up-state New York, where they immediately began composing this track.

“Kaleena’s voice is incredible and her energy is so infectious. You just have to see it to believe it. I saw it at the Mixmag retreat at Allaire Studios and I was a believer right away,” said Moon Boots during an interview. “I’m amazed, thinking back on the session, that turned into ‘Juanita’. It was late at night and our sober daytime sessions had morphed into a full-blown party. Kaleena was saying “I need aerobics” over and over while I was messing around on an SH-101. I asked if she could change it to “Juanita hold me.” It shouldn’t work but it just does.”

When asked about her experience producing with Moon Boots, Kaleena said, “[He] and I instantly clicked at the Mixmag retreat held at Allaire Studios in Woodstock, NY. We consistently found each other in the live rooms working on music, and as a result, "Juanita" was born from a good ol' live jam session we had one night. Pete is an outstanding musician/producer and it was an honor to work with him."

The track is set for an August 9 release on Anjunadeep, but catch a sneaky early release below. Moon Boots' forthcoming album 'Bimini Road', inspired by the discovery of the ruins of Atlantis at Bimini in the Bahamas, is set for release September 6. Purchase here

In further pondering the power of this track, Moon Boots went on to say, “The song has elements of Prince and Cajmere but Juanita is her own person. This is one of the club tracks I am most proud of, and none of it would be possible without Kaleena’s unstoppable energy and talent."

Moon Boots brings divine vibes to the dancefloor with 'Keramas'