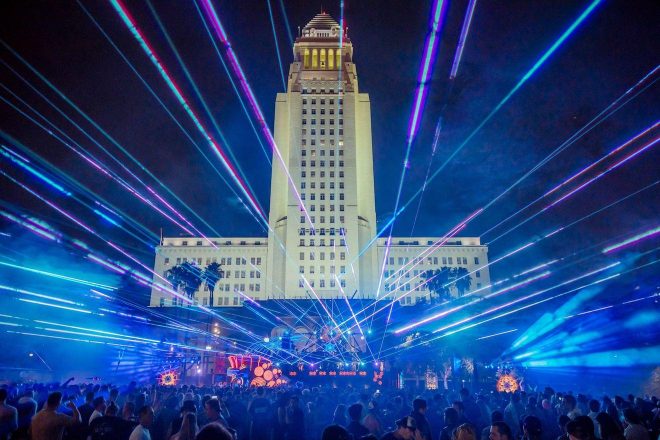 The fabled Mayan Warrior will be back in Los Angeles on July 20 with a shimmering techno vengeance. After melting many-a-face during a US tour last year, the Mexican crew is hosting another series of fundraising events in 2019, before returning to Burning Man for their ninth year on the playa.

Stranger Than; is pulling out all the stops to produce a top-notch event in a brand new LA location, that’s also uniquely appropriate for the Mayan Warrior. The El Pueblo Historical Monument will provide the venue; a suiting space, given its heritage as a Latin and Native American landmark in Los Angeles.

Located near the historic Olvera Street, El Pueblo is an homage to the nearby Los Angeles pueblo where forty-four settlers journeyed from present-day Mexico to establish a farming community in 1781. The Mayan Warrior crew is following in the footsteps of their forebears to bring their artistic and cultural offerings to Los Angelinos, and the land initially settled by Mexican immigrants.

The Mayan Warrior crew will be providing the soundtrack for the day, with yet-to-be-announced special guests. All proceeds from the event will go toward funding the Mayan’s trek north from Mexico City to Black Rock City.

70,000 watts of electricity will be surging through their speaker stacks, neon panels, and RGB laser projections, creating an unprecedented feat of audio visual glory. Their sound system boasts a total of 24 d&b subs, with two full-range line array speakers.

Mainstay residents of the Mayan Warrior, including Rebolledo, Damian Romero, Mandrake, and Concret, have regularly performed on the art car, helping to establish the world class musical offering of the production.

The artistic aspects of the car have drawn inspiration from Mayan and Huichol art, tastefully paired with cutting edge technology. The Mayan Warrior is a product of a new generation of Mexican artists, led by founder Pablo Gonzalez Vargas. Contributors to the project include an artist collective of craftsmen, photographers, designers, technologists and architects from Mexico City and Northern California.

The Los Angeles showcase will be the second of three events, in which the art car will be debuted in its entirety. The Brooklyn Mirage is hosting the first stop, with The Trash Fence in San Francisco concluding the full art car leg of the fundraising tour.

“We’re imagining each night as a journey through the artist selection, focusing on the whole experience rather than on single moments or highlights,” said the Mayan Warrior production team in a press release.

Tickets for the LA showcase are available here.