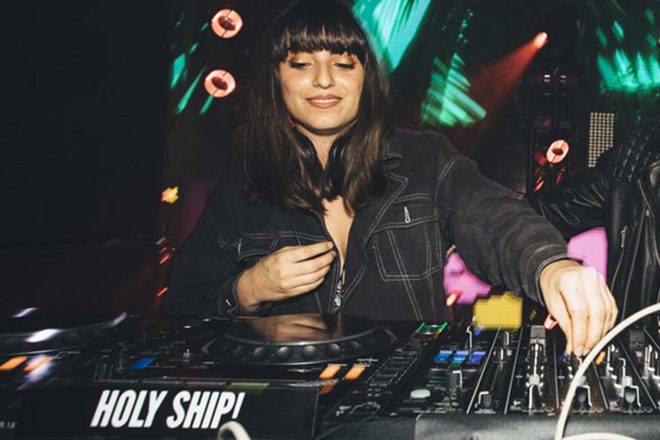 Holy Ship, the annual electronic party at sea, hosts a slew of artists from across genres for each sailing. For its 11th sailing, talents like The Black Madonna, Denis Sulta and Madam X were invited on board and brought into the ship's programming.

During Madam X's anticipated set on the journey's final day on Friday, January 12, the UK star was placed between artists 4B and GLADPVCK on a "hip hop" party lineup. Despite the titled billing, Madam X took the stage to play her sounds of grime, drum 'n' bass, techno and an assortment of welcomed UK flavor to a packed room.

Sometime during the set, an uninvited guest by the name of James Earl grabbed the mic and turned down the fader to proclaim: "What is this shit? What's happened to my hip hop room? Where's my trap at?" He was quickly booed off the stage for his unwelcomed opinion and Madam X continued on, addressing the incident later on Twitter and Instagram.

"To the ass-wipe who felt the need to come on my set, grab the mic and slew my music for not being "hip hop enough" - you can jog on," she wrote. "I am not responsible for incongruent programming. Although I was placed on the "hip hop" stage, I will always do me and play my shit. Never in all my years of DJing have I experienced such distasteful, tacky behaviour. Only want positive vibes when I play."

A quick check on the official Holy Ship lineup confirms that James Earl was not an artist or a DJ playing on the ship or in the room hosting the "hip hop" party. Earl is listed on online film database IMDB as an actor with appearances on shows like musical sitcom series Glee, Scream Queens and a small stint in a 2009 flick about male cheerleaders called Fired Up!

Only want +tive vibes when I play

to the crowd for boo'ing him off

Had a blast Thanks to all the ravers who came to see me Means a lot & to the ASS-WIPE who felt the need to come on my set, grab the mic & slew my music for not being "hip hop" enough - you can jog on. I am not responsible for the incongruent programming. Although I was placed on the 'HipHop stage', I will ALWAYS do me & play my shit. Never in all my yrs of Djing have I experienced such distasteful, tacky behaviour. Only want +tive vibes when I play. So much love to the crowd for boo'ing the bell-end off. Hope he crawls back into the ignorant hole he came from. Meanwhile I will continue my USA TOUR to New York, Dallas & El Paso Peace & Love

Later on, James Earl tweeted a video and a response to Madam X, attempting to explain that he meant to direct the statement at the stage. He continued on, referencing himself as a DJ, stating that it's "our job as DJs to do our homework".

@DJmadamX much love to you. I apologize if I offended you in anyway. The rant wasn’t about you specifically It was about the Stage. Our job as DJs is to do our homework! There was no reason for you to have to play to an empty room when it was full like this. pic.twitter.com/PqHDGc0IS2

Following the interaction, he continued to address the incident on his Instagram, stating that "according to the rules", it's a DJ's responsibility to play whatever genre the stage dictates.

I love how @JAMESEARL3 couldn’t take the heat so he made his Twitter private and yet he’s still on Instagram story talking his arrogant nonsense about #HolyShip pic.twitter.com/1F58c9dTXY

Maybe it's best to let the professionals do their jobs, James Earl.

Check out Madam X's Impact mix here to get a taste of exactly what kind of style she's rocking.

The final word went to fellow Holy Ship artist Jubilee who succinctly explained why this sort of behavior is exactly what prevents women from feeling confident in the male-dominated world of dance music.

Could you imagine you come to America to dj after working so hard and one of the bigger headlining Djs hanger on bros gets on the mic and starts putting you down while you are djing ON STAGE ??? @JAMESEARL3 wtf is wrong with you ???

Y’all are like “yay women me too” and then you bring men around like that . Check your friends and check yourself. @DJmadamX is a g and that would have never happened if it was a dude djing and you all know it

“Why are there no women in music? “ https://t.co/BIldYjUqeG