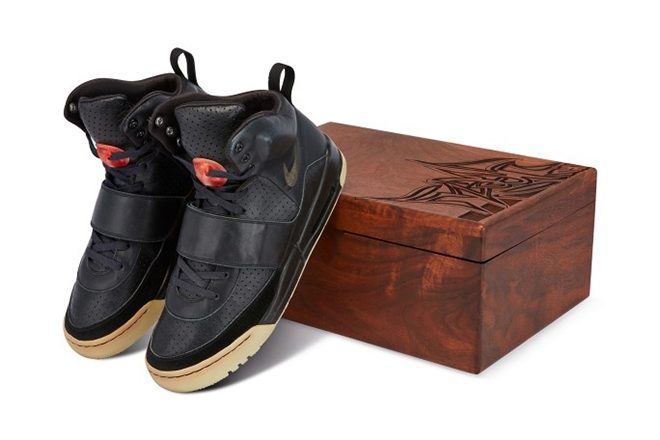 The Yeezy shoes worn by Kanye West during his 2008 GRAMMY Awards performance have sold for $1.8 million - making them the most expensive sneakers in the world. The previous record was held by Michael Jordan’s autographed 1985 Nike Air Jordan 1s which sold for $615,000 in 2020.

The sneakers were sold at a private auction at Sotheby’s by Ryan Chang, a New York collector. They were acquired by RARES, a platform dedicated to sneaker investment.

The prototypes, designed with Mark Smith, never hit the shelves before the rapper ended his collaboration with Nike in 2013, but they captured the public’s attention during West’s 2008 Grammy performance, where he performed 'Stronger' and 'Hey Mama'. The rapper won four GRAMMYs the same night, including Best Rap Album.

Kanye West’s prolific fashion design history has meant that his pieces are in high-demand, often reselling for much more than their original price.

Read this next: Kanye West's Yeezy company is suing a former intern for $500,000

The head of Sotheby’s streetwear and modern collectables, Brahm Wachter, spoke of West’s impact on the fashion industry, saying: "The sale speaks volumes of Kanye's legacy as one of the most influential clothing and sneaker designers of our time."

The co-founder of RARES, Gerome Sapp spoke about the importance of the purchase for his organisation, saying: "Our goal in purchasing such an iconic shoe - and a piece of history - is to increase accessibility and empower the communities that birthed sneaker culture with the tools to gain financial freedom through RARES."

West became a billionaire in 2020, mainly through the empire he has created with his Adidas and Yeezy collaboration, and this seems to be growing, with the artist also collaborating with GAP.

Watch Kanye West's 2008 GRAMMY Awards performance, in which he wore the trainers, below.