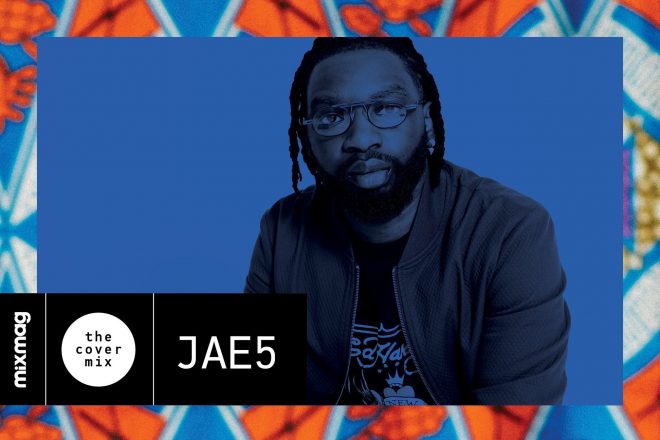 The last two years have seen J Hus rapidly rise from hotly tipped street rapper to figurehead of Britain’s most hyped new scene; Afro-whatever-you-call-it. On tracks such as ‘Lean & Bop’, ‘Friendly’ and ‘Did You See’, Hus has managed the tricky feat of appealing to commercial radio, hardcore fans and fickle fashionistas alike. This has been enabled in no small part by the close bond he has formed with producer Jae5. Having met Jae5 right at the start of his career, Hus has insisted that Jae works on every single record he makes – and between the two of them they’ve forged something that has started to take over the mainstream.

“I started producing when I was in Ghana,” Jae5 remembers, chatting on his phone while sat outside the studio where he’s near-permanently ensconced.

“I was in Accra from around 2008 to 2011. I’d been sent out there ‘cos I was getting into a lot of trouble. My parents fully tricked me; I thought I was there for a holiday, for a couple of weeks, and bloooaaw! that was it. I was there for years. I can’t lie though, it was the best experience of my life.”

Bored in Ghana, Jae got hold of a copy of Fruity Loops and started trying to make the grime he’d grown up on. The problem was, he wasn’t hearing it any more. Instead he was surrounded by Ghanaian hiplife, the uptempo version of hip hop that’s massive in the country. Naturally the sound seeped into his music. “It was weird,” he muses, “because I wasn’t trying to make what I was hearing, but all my influences were from what I’d hear out in Ghana.” Almost by accident, the seed for his sound had been planted.

Returning to London, he fell into trouble again and got offered a space on a music production course in exchange for a reduction in probation time. He loved the course and never looked back. And when he got chucked out of school for causing mayhem, the people who ran the course noted his talent and offered him a job – “and from the age of 15, music is what I’ve done. I’m grateful.”

When he met Hus. who was on the same course, the pair bonded, and, two years later, started writing music together. It was on 2015 track ‘Lean & Bop’ that Jae 5 feels they started making something quite unlike anything out there.

“That was the moment I said, ‘Yeah, I love this guy,” laughs Jae. “With everyone else I was making the same tune. Imagine everyone coming into your studio rapping, ‘I want to shoot someone, I want to stab someone’ – the same lyrics coming from all these different guys. Hus came in the studio and said ‘Yo Jae, I want to record something my little brother can listen to, I don’t care how pop it sounds’. He allowed me to say, ‘Fuck it, I’m gonna make a pop tune’. He was willing to rap on anything.”

This freedom pushed Jae5 into splicing in sounds from other genres – name-checking Drake’s Maya Jane Cole-sampling ‘Truffle Butter’ as the key influence, and an example of a successful melding of hip hop and club sounds. “There are sections that sound like a slowed-down house record,” he says. The collaboration has resulted in the massive success of debut album ‘Common Sense’ – written by Jae and Hus throughout.

As to naming this new style he’s been pulling together with Hus? Jae isn’t about to enter that debate. “I have no idea what our sound is called. I like the fact that people are giving it a name, though, it makes me look bigger than I am, but in reality it’s just a mix of all the music I like. It’s Afro something. I’ve heard Afro bashment, Afro swing... I personally have no idea.” He pauses to think.

“I know I make music. I just like making beats"

“There’s a real simplicity to this. Omarion nails the melody, there’s not a lot going on in the instrumental, but it still feels complete”

“The way Maleek combines Afrobeats and commercial pop on this track, it’s a beautiful blend”

“‘Been Calling’ has a real mellow vibe. Again, it’s a perfect blend of pop and Afrobeats, but it lands closer to an r’n’b track”

“You don’t get a lot of artists that can be both melodic and versatile in the UK, and this just shows off the feeling Lotto Boyz can capture”

“For the same reason as ‘Bad Gyal’, I picked this for the Lotto Boyz themselves. They just have a unique versatility”

“A great example of an Afrobeats version of r’n’b. If you’re at home and you want to catch a vibe with a girl that’s the song I go to”

“If you’re in the dance and you want to get active, you want to jump up and get things moving, this is the song you play. It’s a club banger”

Another track that has a simple instrumental, but vocally the flows are so complex and the two mesh very well together”

“This one’s just a banger. There’s no other explanation needed; a song to shake the club”

“Earlier in the year I was thinking, ‘Who’s going to have the biggest song of the summer?’ When I heard this, there was no doubt in my mind”

“The only song I thought could follow Mo Stacks was ‘Fisherman’. It’s got that same summer banger vibe”

“Everybody’s heard the original and we all know it’s big, but the remix is just as big”

“On the album, this is one of those songs that has an uplifting and positive message. It shows that it’s not all about negative energy”

“The original is amazing and I can’t believe I got the opportunity to interpret it my way. Joe from Black Butter hit me up one day and said, ‘Do you feel up for doing a remix?’ I didn’t even think about it”

“When I listened to his album I was expecting to hear a lot of grime, a lot of aggressive music, but this was probably one of the most beautiful songs I’ve heard in a long time”

“There are very few hip hop, urban artists that do beautiful music. After Stormzy, I had to play J Hus because I feel it puts him on that vibe”