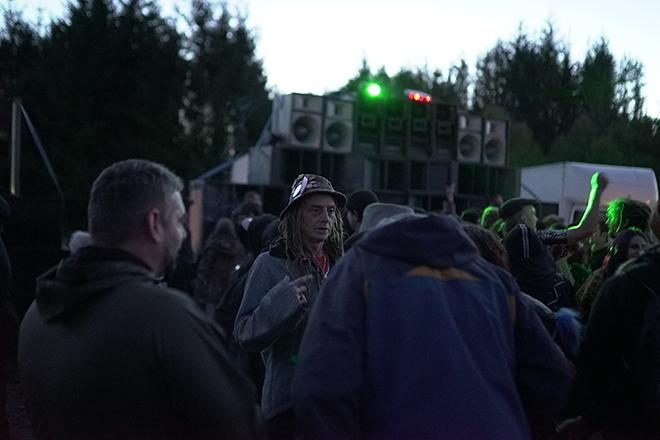 The August Bank Holiday saw a number of illegal raves take place across the UK despite the recent introduction of rules allowing police to fine organisers up to £10,000 as the government cracks down on lockdown breaches.

58 unlicensed music events were reported to have taken place on Saturday alone, with police shutting down 21 of these and investigating the organisers of others. The current rules only only for gatherings of up to 30 people outdoors in England and Wales.

Around 3,000 people are said to have attended the gathering in South Wales in the village of Banwen (pictured), where two organisers were given fixed penalty fine notices for £10,000. Three people were arrested in connection with the rave: one for a public order offence and two for driving while intoxicated from drugs or alcohol.

Police said the event was “totally unacceptable”, and have now identified 22 people they believe are responsible for organising it.

Eight people were issued with penalties across multiple parties in Yorkshire on Saturday evening and early Sunday morning.

Read this next: Police found it "impossible" to stop a 3000-person rave in Somerset

Two DJs were also fined £10,000 and had their equipment seized after police broke up a party in Leeds’ inner city area Burley, and £20,000 of music equipment was seized at an event in the Chapeltown area. A man was charged with causing a public nuisance by West Yorkshire Police and five fines were handed out after a street party in the Harehills area was broken up.

In Norfolk, an unlicensed event taking place in Thetford Forest with more than 500 was shut down by police in Thetford Forest. Police say bottles and cans were launched at officers at the scene. Sound equipment was seized and several arrests were made.

On Twitter, Norfolk Police said: “Illegal gatherings = coronavirus dream. We all like a good time, but there’s a time and a place. Raves are not that place. Young people are not immune to this disease. Going to an event could harm your health and your bank account.”

Illegal gatherings = coronavirus dream. We all like a good time, but there’s a time and a place. Raves are not that place. Young people are not immune to this disease. Going to an event could harm your health and your bank account. https://t.co/KLwyxw7e0Q pic.twitter.com/XaXPmlFYiq

The Metropolitan Police has said it is considering fining four people £10,000 after an unlicensed music event took place in Hackney Wick.

Essex Police managed to stop an unlicensed music event in Harlow before it started, seizing thousands of pounds of music equipment. The police are looking to take the organisers to court.