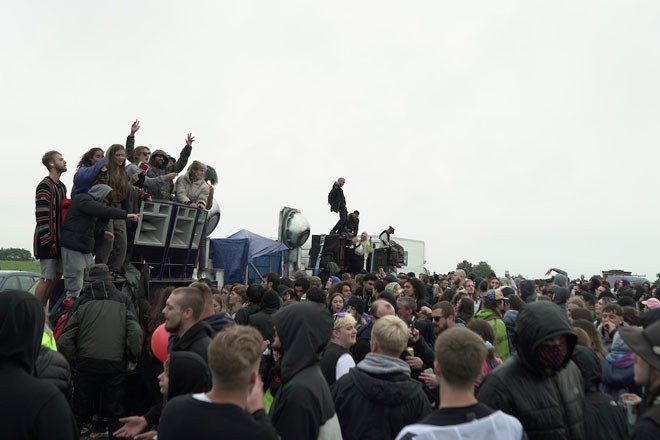 At 3am on Sunday morning lasers, coloured lights and pounding music were blazing through the drizzle in an abandoned RAF airfield in Somerset for a free party that would last late into Sunday afternoon.

Around 15 free party crews had come together to put the event, which was advertised as The Return of Scumerset and took place three miles outside of the city of Bath, with 3000 ravers in attendance at its peak despite pouring rain late on Saturday.

Many of the crews came from the surrounding area as well as others travelling from further afield, including one crew that had driven for five hours in order to transport their sound system to the event.

For more than 15 hours a wide range of sounds were showcased on multiple makeshift stages and dancefloors including acid techno, bassline, garage, drum 'n' bass, and jungle. 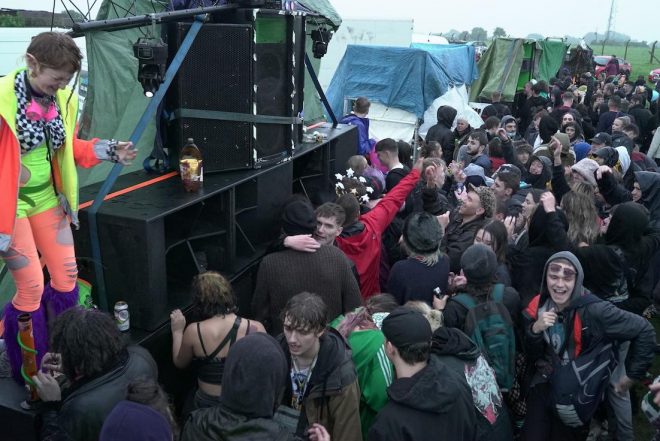 “It’s crazy how everyone can come together and make this work,” said Luke, a 24-year-old musician from Bath that was attending the event with some friends.

“Despite all the problems and mud – people have come together to put on a party that anyone is welcome to attend, it’s huge and it’s completely free.”

One of the people that had travelled to the event with a soundsystem said that the crews involved in the rave hadn’t put on any parties since the Covid-19 lockdown restrictions were introduced.

“We’ve just been chilling out and respecting the rules,” he said. “Sanding the speaker cabinets and giving the rigs a lick of paint.

“It feels good to get it out in a field and turn up the volume.” 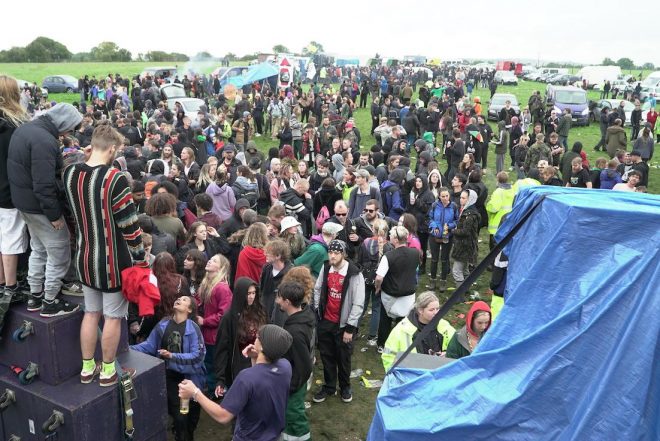 Many ravers had hiked for more than half an hour to get to the event as a police van had parked in a position blocking the route into the airbase and causing traffic to back up on to the main road where cars were parked up in lay-bys.

Specialist police units were deployed in an effort to shut the party down after being alerted to it at 11pm on Saturday night but, according to the BBC, were powerless to stop it until Sunday afternoon.

Avon and Somerset police Ch Supt Ian Wylie said: "We got the call just after 23:00 and we were there within 10 minutes but all the stages were set up and all the music was already going with many, many people at the site

"We don't have a standing army waiting to deal with these issues," he added.

Read this next: Illegal rave crews are using this app to avoid the police

Five vehicles, a generator and other equipment were seized, according to the police.

The police also said an investigation is under way to identify and take appropriate action against those responsible for the event.

The rave was part of a country-wide spate of illegal parties that have begun during lockdown.