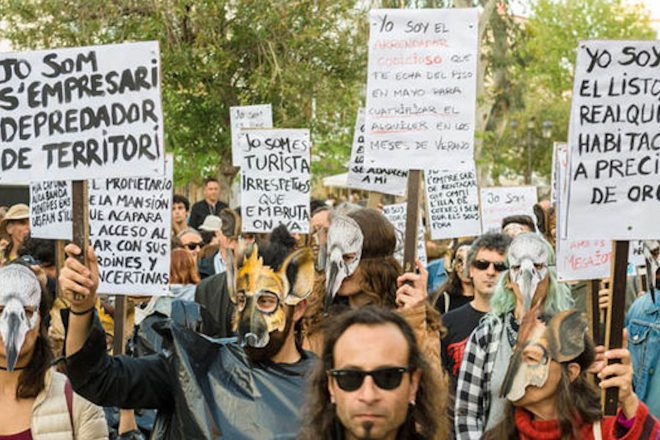 Hundreds of locals took to the streets of Ibiza to protest against what they say is “unlimited, disrespectful and excessive” tourism.


The protest was organized by Prou! and took place on Friday with more than 500 people gathering in the Ibiza Town's main square, Vara del Rey. According to Diario De Ibiza, this was the first mass protest held in Ibiza against the excess of tourism.

Locals are outraged by the "exorbitant growth" of tourism that has taken place in recent history. Noise pollution and the privatisation of beaches remain a major concern for residents.

The director of Prou!, Àngels Escandell, attended the protest and read the group's manifesto: "We can not continue living exclusively from tourism. It is not that we challenge [toursim], but we do challenge that it is unlimited, disrespectful and excessive. They keep telling us again and again that we live from tourism, but we don't live well—we live badly. We can't call 'living' having to endure the plague of uncontrolled tourism that periodically assaults our island, that initiates the season of deafening music, that brings the psychopaths driving luxury cars and the never-ending traffic jams."

Prou! goes on to describe how tourism is damaging the local culture: "We have created a monster that has devoured our language and our culture, [as well as] natural resources and the landscape, devastated for the benefit of a few by mammoth buildings and disproportionate highways."

The manifesto continues: "The exorbitant prices of accommodation have forced us to substitute a specialized workforce, doctors, teachers and policemen for DJs and music promoters.”

Just last month, the council in San Antonio passed a law declaring that clubs and bars in West End will now be forced to shut down by 3AM. It remains to be seen how this new law and curfew will effect the San Antonio club scene.