Homobloc and The Warehouse Project criticised over ownership: "A queer event of this scale should be run by LGBTQ+ people" - News - Mixmag
Home Latest News Menu 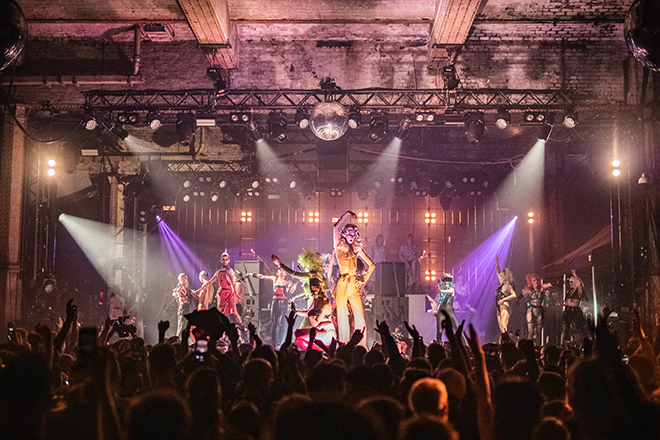 One of the UK’s biggest queer raves, Manchester’s Homobloc, has been criticised by local promoters High Hoops — who have accused the event of being “owned by and benefitting cis straight men.

High Hoops initially raised concerns surrounding Homobloc in an Instagram post on Tuesday (22 November), principally around those who own stakes in the event —as well as doubts over if less established artists and creatives are being properly compensated for their involvement.

High Hoops wrote: “There is little doubt the potential benefit that an event like Homobloc can have for the LGBTQ+ community; in terms of creating a space for LGBTQ+ artists, performers and dancers to come together."

“Whilst we recognise there is input from LGBTQ+ staff into the organising and promotion of Homobloc, there remains a feeling of unease that the event is owned by and continues to principally benefit cis straight men,” it continued. “Not to shame the organisers for their status, but we want to ask they uphold the same standards we demand of ourselves.”

Homobloc was founded in a partnership between Homoelectric and The Warehouse Project — the latter is majority-owned by publicly-listed entertainment ticketing company Live Nation. Saudi Arabia’s Public Investment Fund (Pif) reportedly owns a stake in Live Nation valued at around $1 billion.

Read this next: Homobloc locks in Róisín Murphy and Honey Dijon for 14-hour party at Depot Mayfield

High Hoops wrote: “It demands continued scrutiny and protest that the kingdom and the individuals within Pif criminalise same-sex sexual activity between men and between women. The gender expression of trans people is also criminalised. Sentences include a maximum penalty of death,” they said. “In 2019 Saudi Arabia announced they had executed 37 men. Reports suggest that five of those were executed for same-sex sexual activity. It is unacceptable that an organisation such as Pif would benefit from an event such as Homobloc.”

High Hoops also raised concerns in the post about where money raised for charitable donations had come from, with Homobloc claiming after the 2021 edition that it had raised £46k to donate to four LGBTQ+ charities.

High Hoops wrote: "This amount of money will have a positive impact for the charities receiving these funds, but there is a question around where that money truly came from. It is believed that the other amount was raised via merchandise sales and other donations made directly from the LGBTQ+ community. We have raised this with the organisers and asked if they would be kind enough to open up their books to provide reassurance," they continued.

High Hoops have now elaborated further on their criticisms and shared an update on their position in a statement seen by Mixmag, they wrote: "As LGBTQ+ people we are not afraid to have difficult conversations with ourselves and our friends and hold each other accountable, because it’s all we have ever known and it’s because we care. If the organisers of Homobloc take this as an attack or attempt to “cancel” them then they have once again grossly misread the situation and the genuine feedback that is being given from the network of parties and performers that they have and continue to employ.

"The statement we put out was never meant to diminish Homoelectric’s history in Manchester, it was written to try to bring conversation and hopefully change, after previously meeting with the organisers on two occasions which had brought neither of which to the table. Our bigger concern with this was seeing queer voices being shouted down and attacked by straight voices, which is all too familiar for us."

Read this next: Body Movements Festival was a landmark occasion for queer self-expression

"Whilst of course any club night needs to make money, Homoelectric deciding to work with The Warehouse Project to produce Homobloc, in effect employing many of their business models, they have made a number of concessions and lost sight of the community they are meant to be serving, for profit. The Warehouse Project is a highly lucrative and successful business and as such it is of course set up to make money. That is why they have such high ticket and drink prices, it’s why they have such incredibly early final entry times and it’s why they employ restrictive exclusivity clauses for DJs."

"We think that a queer event of this size and involving this much money in our city should be predominantly run by and on the feedback of queer people who live this life everyday in our community. Just because a gap in the market exists doesn’t mean it should be exploited and filled by people who have no experience of growing up LGBTQ+."

"Many of the points in our statement were made to inform and allow people of our community to use critical thinking on the matters raised. The link to Saudi, however much the team at WHP tries to trivialise it, exists. Whether it is 0.1%, 1% or 10% stake in Live Nation, there is still a traceable link back from anything Warehouse Project finances, to PIF. We hope opening that discussion has allowed people to research for themselves and see how comfortable they are with a financial link, albeit small, from a queer festival to a government with human rights abuses."

"We believe that there can be change and to move forward there should be greater transparency on charity donations from Homobloc’s PROFITS and not from the local queer community through donations. While we agree the money from the 2022 event raised will go a long way, we think from the gigantic profits the event rakes in, the breakdown of this amount feels like the bare minimum comes from the huge takings of the organisers. Secondly, there needs to be more engagement with local community - with several North West queer run club nights distancing themselves from the event, this should be a tell tale sign that many queers feel alienated and put off by the internal structure of the event, huge profits for non LGBTQ+ directors and minimal pay for local performers."

"Our statement is out now and it is up to Homobloc and The Warehouse Project to take on board the comments and address these concerns themselves which are ones that have been raised again and again by many DJs, promoters, performers and punters, most of which don’t feel comfortable to speak out due to their power and influence in Manchester."

In response to Tuesday's statement from High Hoops Luke Cowdrey (AKA Luke Una), the founder of Homoelectric and Homobloc told Mixmag: "We appreciate and acknowledge the considered statement that High Hoops has made regarding Homobloc."

"Homoelectric was founded nearly twenty-five years ago in Manchester and has always been an inclusive experience centred around bringing people together. Our slogan 'For homos, heteros, lesbos, don't knows' has always been our mantra," he continued.

"This year there were 200 fully paid, mainly local, mainly LGBTQ+, artists and performers included within the show, and as Homobloc continues to evolve our ambition is for this number to grow. It has been questioned how and where the charitable funds that we raised came from: this was broken down clearly after the 2021 party and will be again once this year's fundraising is concluded.

"The donation directly from Homobloc makes up around 50% and other Homobloc activations make up the balance – this does not include any bucket collections on the night, which are on top. We are happy to share all of this in detail with High Hoops."

The Warehouse Project co-owner Sam Kandel also responded to the statement, telling Mixmag: "Homoelectric has been a constant and much loved presence in Manchester for over twenty years. Given their legacy in the city and the pioneering work they have done, we believe they are an appropriate outfit to host an event such as Homobloc.

Read this next: Sweet salvation: How Homobloc took the queer underground to new heights

"The Warehouse Project's role in the event is to support form a production perspective and help them realise their vision. We are able to share the physical infrastructure and some of our core team, without which the event would not be viable.

"As an organisation we are always looking to improve," he continued. "We are speaking to High Hoops directly and hope to meet with them in person very soon to address some of the points they have raised."