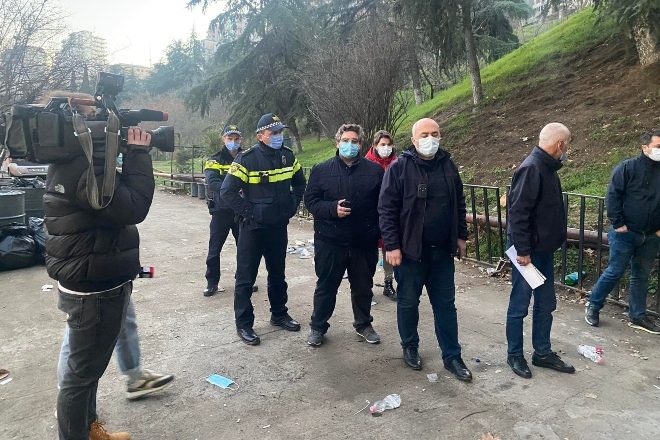 One of Georgia’s landmark nightclubs, KHIDI, has been forced to close over the weekend following a police raid.

According to KHIDI representatives, the all-important club which sits along the Mtkvari River in Tbilisi was broken into by police on December 3 during the club’s first event in over 21 months.

The raid happened in reaction to the event which went ahead on Friday following restrictions easing across the country - as of December 1, all entertainment sectors were allowed to reopen in Georgia aside from nightlife.

KHIDI's co-founder, Johan Axander, told Mixmag that the event went ahead in "protest" of the current restrictions against the nightlife sector, in the face of potential legal backlash.

Read this next: We went to Georgia to investigate the threat to the country's club scene

A representative at Georgia's Cultural and Creative Industries Union said that clubs are on their way to reopening as the government discuss restriction easing, although KHIDI "didn't’ wait until this process had been completed and opened for one day in defiance," he told Mixmag.

"I am working with the relevant authorities to get them open in time as restrictions will be lifted. But the fact is that KHIDI got warned not to host illegal events days before, but they still went ahead with it."

According to Johan, KHIDI reopened on Friday, December 3, operating at a 75% capacity with a Green Pass system implemented, in which attendees must either be fully vaccinated, recovered from COVID, or have proof of a negative PCR test.

"It was the same protocols that we used before during our pilot event on October 8 together with the Cultural and Creative Industry Union that was supported by the Ministry of Health," said Johan, who told us that out of 1,500 people who attended that event, only 4 cases were found in the weeks after.

Other entertainment venues including theatres, bars and stadiums were allowed to open with the same protocols. KHIDI was raided on the night of the event due to its size, which was deemed “a gathering of more than ten people”, although club owners argued that this law is now outdated.

KHIDI was then subject to a fine of 10,000 GEL, or £2,5000, as the club was sealed on December 4 without a warning or presence of any owners or members of staff.

Labor Safety Inspectorate representatives issued the club a "fine sheet and a tax report”, which according to club owners, was "unprecedented" and not mentioned during the police break-in.

"The day after its closure, there was this government coordination meeting where, following that, we learned that clubs can reopen on December 17, although the details yet are not clear to us," Johan told Mixmag.

Nightclubs in Georgia have now been shut for almost two years, and while some venues have been given rent relaxation, KHIDI is currently forking out payments for the space which is putting the club into a "financially difficult" position.

Read this next: "Determined for change": Lilith. is driving Georgia's rave revolution

"On our business loan we have accumulated a huge amount of interest over 21 months, our bank accounts frozen and private property arrested," Johan tells us. Now facing a hefty fine, owners are figuring out their next steps financially in order to reopen this month.

"KHIDI is more than just a club. Of course, that's the centre of our program, but we also have dance events, film seminars, and many other events with gatherings of artists from all over the world meeting and talking and learning," said Johan.

"It's been hurt in all of this. We have a lot of people working with us who have now been out of jobs for a long time."