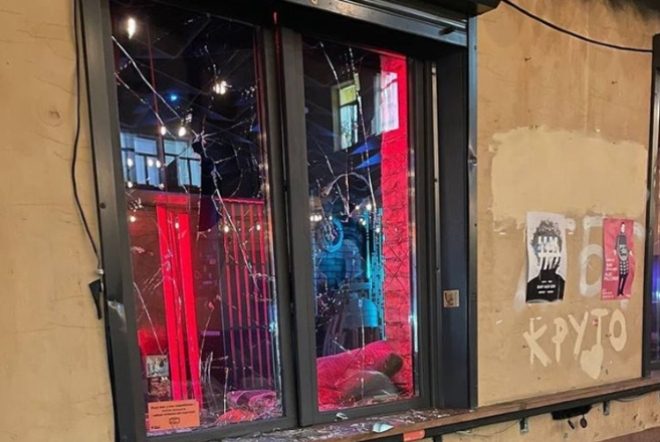 Kyiv club HVLV was attacked again by the far-right on the evening of November 26.

Berlin's Ecke Records was present in the building at the time of the attack.

According to HVLV, three unknown people approached the bar at 6:39PM and immediately 12 other people ran into the yard.

Read this next: Protestors in Kyiv throw rave outside President's office in support of LGBTQ+ rights

An Instagram caption by Ecke Records states that attackers "destroyed the bouncer’s vision with multiple bear spray attacks, beat him with a police baton", and then went on to shout homophobic and racist slurs and abuse outside the venue.

"It happened as we set up for sound check - broken glass flying around the room, pepper spray coming in through the smashed windows accompanied by rocks.

"The incident lasted around 2m30s as they must’ve got word that police were coming."

Except for the bouncer, who "should recover completely," no one was "seriously injured," according to the post. Andy Yankovskyi, co-founder of HVLV, verified the situation to RA.

Police detained ten members of the group after the incident, according to Babel. According to the same report, a card with a QR code and the phrase "CENTURIA" was discovered during the event.

Read this next: A new club has opened in Kyiv

This attack comes after a string of threatening occurrences involving the extreme right in Podil.

On November 5, far-right groups in Ukraine’s capital city of Kyiv led a "crusade" against nightclubs that were are accusing of selling drugs in-house.

Read this next: Far-right factions to lead a march against nightclubs in Kyiv

Ecke Record's scheduled event took place on the night after the incident had been cleared up.

Read this next: "A little magic world": How Strichka turns Closer into a party of endless discovery