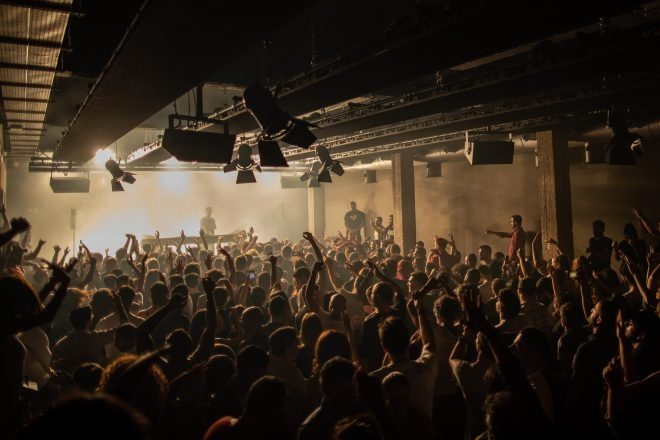 An explosion in Beirut has caused significant devastation to the city, including its nightclub district being "virtually wiped out".

The blast took place in the city's port and was caused by 2700 tonnes of ammonium nitrate which had been stored in a warehouse.

It sent a blast wave across Beirut and has had a catastrophic impact on the Lebanese capital. The Red Cross reports that at least 100 people have been killed and 4000 others wounded.

Reporting from the ground for The Guardian, journalist Martin Chulov states that the "whole nightclub district [has been] virtually wiped out."

Scores of nightclubs and bars were located close to the site of the explosion, including The Gärten, The Ballroom Blitz (pictured above), The Grand Factory, AHM and B018.

Many of these venues have been instrumental in incubating dance music in Beirut: The Gärten is run by the trailblazing überhaus crew who were among the first promoters in the city to eschew table service for a proper underground dancefloor; B018 has been booking DJs for over 20 years and was recently redesigned by Lebanese architect Bernard Khoury; and The Ballroom Blitz has been committed to operating a "dynamic, transformative and diverse space".

It's also likely that The Egg, a former brutalist cinema and illegal rave spot, has also been affected. Parties thrown as part of anti-government protests were recently held there.

Speaking to Mixmag, co-founder of The Ballroom Blitz Moe Choucair said:v"The nightclub district is indeed all along the port but the damage means nothing to our team in comparison to the apocalyptic disaster our country went through.

"The explosion destroyed Beirut and shook the entire country. There are thousands injured, more than a hundred dead and the numbers are still going up by the minute. We’ve stopped thinking as a club and started thinking as a team of individuals pooling ideas to try and help in the most efficient way we can think of. Our establishment is the least of our concern right now because of the huge impact and urgency to react to this catastrophe.

"The explanations are still going in all directions. There is a massive distrust in our government concerning the investigation and judiciary follow up. The implications can be most drastic politically and socially. This can be a massive turning point for Lebanon, the next days will be very hard. Our deepest condolences go to the families that lost children, parents and siblings.

"The Lebanese people were in a very bad position in recent months and this will be very hard to get over. For people who want to help, here are a couple of links: [donate to the] Lebanese Red Cross and [hunger relief initiative] FoodBlessed."

The Governor of Beirut, Marwan Abboud, has said that half the city has been damaged by the explosion, with the cost of the damage likely to exceed $3bn.

Hospitals have been filled beyond capacity and rescuers are currently searching for people trapped by rubble.

A list of ways to help Lebanon and those affected by the explosion can be found here.