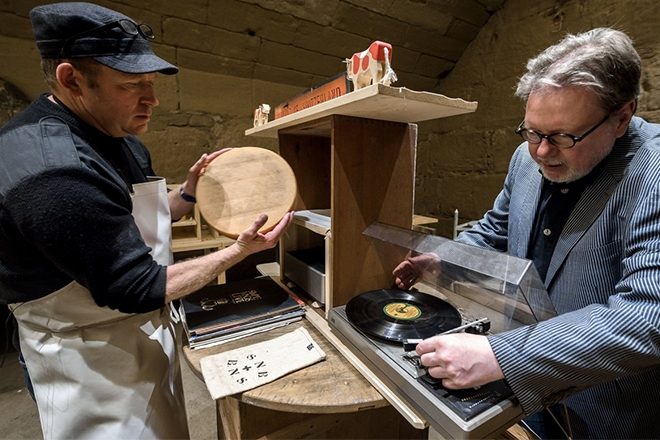 A recent experiment conducted in Switzerland called Cheese in Surround Sound has found that exposing aging cheese to music makes it taste better.

The study was put together in order to investigate how the microorganisms that give cheese its flavor might react to various types of sound waves. During the operation, nine identical 22-pound wheels of Emmental cheese were placed in individual wooden crates and exposed to five different genres of music and three different sine wave frequencies (high, mean, low) for 24 hours a day over six months. One of the wheels was designated as a control cheese - depriving it of music altogether.

Each wheel was assigned a song that would play on a loop for 24-hours during the maturation process. Some of these tracks included Mozart’s 'The Magic Flute', Led Zeppelin’s 'Stairway to Heaven', and A Tribe Called Quest's 'Jazz (We’ve Got)'. There was also a techno wheel of cheese that was subjected to Vril's 2011 track 'UV' off the Ostgut Ton compilation 'Berghain 05'.

These acoustic cheese wheels were then subjected to tests by food technologists from the ZHAW Zurich University of Applied Sciences. In their findings, these food technologists concluded that "cheeses exposed to music had a generally mild flavor compared to the control test sample". They also concluded that the wheel of cheese exposed to six straight months of A Tribe Called Quest had "a discernibly stronger smell and stronger, fruitier taste than the other test samples".

These amazing results show us how the bio-acoustic impact of sound waves affect the metabolic processes in cheese. Crazy.

The cheeses were then presented to a panel of highly qualified culinary jurors in a blind taste test, all of whom noticeably favored the hip hop Emmental. The panel found that the cheeses that were exposed to low frequencies were sweeter than the rest.

During a chat with NPR, cheese enthusiast and experiment organizer Beat Wampfler, there was "not such a big difference" between the rock 'n' roll cheese and the techno cheese.

Swiss celebrity chef Benjamin Luzuy expressed his delight with the experiment: “For chefs like me, these results are fascinating. This opens up new avenues for us in terms of how we can work creatively with food in the future".

Check out the full study by going here.