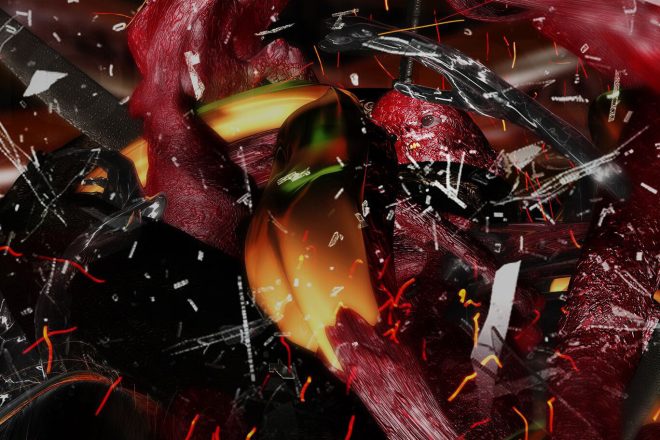 Olin Caprison is the Baltimore-raised multi-instrumentalist composing, producing and performing at the warped cusps of the ever-expanding, experimental club scene under the guise of Violence.

Growing in momentum over the past few years, with particular thanks to collaborations with Mykki Blanco, a belter of a debut album, ‘A Ruse of Power’ released on NON Worldwide, and an early-nod from the titan that is Total Freedom, they’ve now taken their talents over to PTP.

One of our labels of 2016, PTP is the collective putting out seminal cuts from the likes of Endgame, Bonaventure, and other head-spinning progressive producers much to the delight of the club kids. Each release on the label exists in its own confrontational, emotionally-charged space, infecting drill, punk and politics and more with the nihilistic nature of deconstructed club sounds.

The ‘Human Dust to Fertilize the Impotent Garden’ LP, Caprison explains is, “A piece of this, a piece of that". Describing the music as a "struggle", it's dark and dystopian in both cause and effect, highlighting a clear creative progression from previous offerings.Title track ‘Human Dust’ is packed full of raw, human emotion, broken up by icy grime-inflected distorted vocals and clever synth work.

‘Human Dust to Fertilize the Impotent Garden’ is forthcoming on cassette over at PTP. Give it a listen below and head over to Bandcamp to pre-order