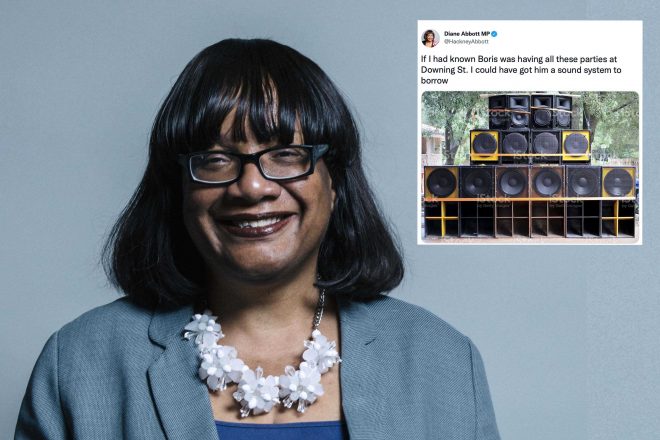 Diane Abbott has weighed in on the news of a BYOB party at Downing Street that allegedly took place during lockdown in 2020, by recommending a soundsystem fit for Number 10.

The MP for Hackney tweeted out to Boris Johnson, declaring: "If I had known Boris was having all these parties at Downing St. I could have got him a sound system to borrow"

She attached a poor-quality iStock photo of an LCD soundsystem which comprises of four monitors and 10 subwoofers.

If I had known Boris was having all these parties at Downing St. I could have got him a sound system to borrow pic.twitter.com/d2vaozYwv0

Earlier this week, reports emerged of another party at the Prime Minister's residence.

During the national lockdown, Downing Street personnel were allegedly invited to a drinks reception in the Number 10 garden to "make the most of the magnificent weather."

An email obtained by ITV News exclusively reveals the first evidence of a party on May 20, 2020, when the rest of the country was prohibited from meeting more than one person outside.

Understandably, many have been outraged online... though others have also been sharing memes.

Abbott's clap back at the news, suggesting that she could have given Boris a soundsystem to borrow, is exactly the reaction we expected from the 'Hackney Abbott'.

'Abbot has a track record of using poor-quality photos to clap back at other politicians.

While it is unknown what Abbott would play out of her soundsystem, Twitter has had some great reactions.

Read this next: They invented the remix

One person said: "Could you imagine Stone Love or Saxon playing at Downing Street?".

Another also commented on the fitting nature of this tweet, someone said: "nah but this tweet is hilarious, auntie abbott said soundsystem culture >>> ".

Mixmag has reached out to representatives of Diane Abbott for a comment.