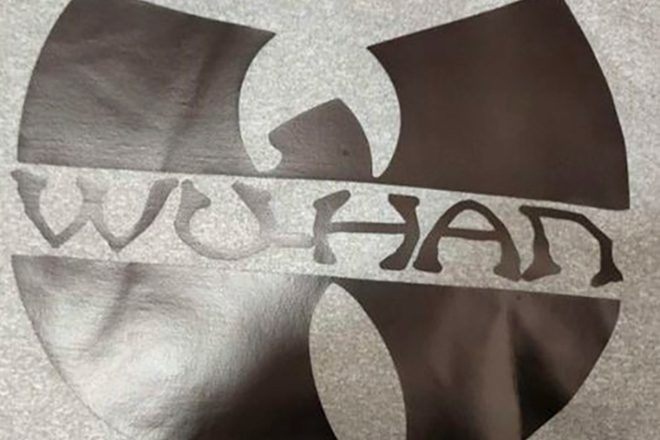 China is fuming over a Canadian diplomat reportedly ordering T-shirts with the word 'Wu-Han' printed in what looks like the Wu-Tang Clan logo.

Those familiar with Wu-Tang will know the hip hop group's logo resembles a bat, the animal that is rumoured to have started the coronavirus in the Chinese city of Wuhan.

Images of the order - which Canada has apologised for circulated on Chinese social media site Weibo. The order was apparently made last year, says the Canadian embassy.

Foreign ministry spokesman Wang Wenbin said: “We are very shocked by this and have lodged representations with Canada, asking for a thorough investigation and a clear explanation."

The Canadian embassy told Reuters: “The T-shirt logo designed by a member of the Embassy shows a stylized W, and is not intended to represent a bat. It was created for the team of Embassy staff working on repatriation of Canadians from Wuhan in early 2020. We regret the misunderstanding."

Although Wu-Tang Clan have nothing to do with the T-shirts, the group's ethos stems from Shaolin, a style of Chinese kung fu. Their name and debut album 'Enter The Wu-Tang (36 Chambers)' takes inspiration from 1983 Hong Kong martial arts film Shaolin and Wu Tang.

Read this next: Netflix to make a film about Martin Shkreli buying Wu-Tang Clan's one-off album

Wu-Tang's RZA was nominated for Outstanding Original Main Title Theme Music For a Documentary Series or Special category at the Emmys last year, for his work on Hulu show Wu-Tang: An American Saga.

Despite COVID-19 originating in Wuhan - and the city making up a high amount of deaths in China - life is more or less back to normal there. Back in August, a packed pool party with thousands in attendance was thrown.

Watch our interview from 2019 with Wu-Tang Clan below.