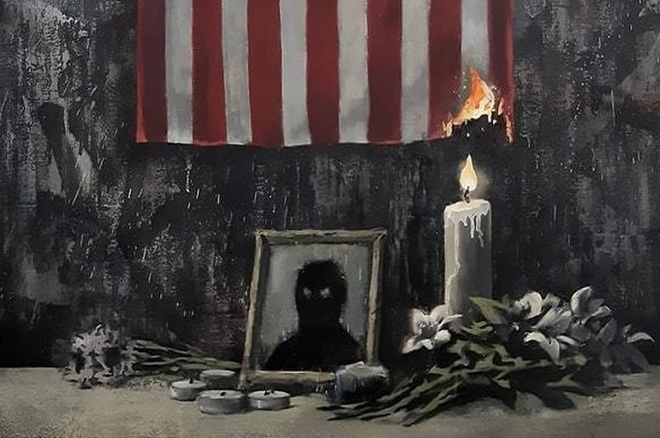 Banksy has posted a new piece of artwork to his Instagram that supports the Black Lives Matter movement.

It depicts an American flag hanging on a wall catching fire from a candle commemorating the loss of a life. The candle sits next to bunches of flowers and a photograph.

Alongside the artwork, Bansky also posted a text saying, ‘at first I thought I should just shut up and listen to black people about this issue. But why would I do that? It’s not their problem. It’s mine.

‘People of colour are being failed by the system. The white system. Like a broken pipe flooding the apartment of the people living downstairs. This faulty system is making their life a misery, but it’s not their job to fix it. They can’t - no one will let them in the apartment upstairs.

‘This is a white problem. And if white people don’t fix it, someone will have to come upstairs and kick the door in.’

Protests have been taking place around the world over the past couple of weeks to stand in solidarity with the Black Lives Matter movement. They were sparked by the death of George Floyd, an unarmed black man who died at the hands of the police in Minneapolis on May 25.