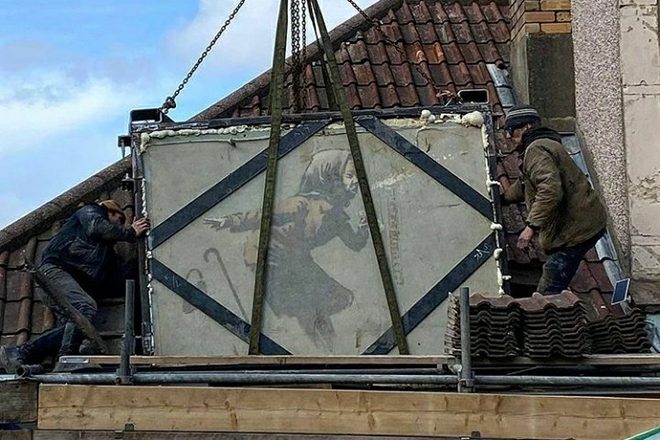 Banksy's sneezing woman mural has been removed from the wall of a house in Bristol.

The Banksy artwork - titled 'Aachoo!!' - appeared on the house in Totterdown, Bristol in December.

A crane removed the piece, which has an old woman sneezing out false teeth, on Friday, in order for it to be auctioned by Dutch auctioneers Hessink. The auctioneers has sold Banksy work before, including Never Liked the Beatles and Gangsta Rat.

This is the second time a Banksy artwork has been removed recently. The removal of his hula-hooping girl in Nottingham caused uproar among locals. That piece was taken to be restored ahead of going on show at an exhibition in Suffolk.

Read this next: Banksy loses copyright to West Bank artwork after refusing the reveal identity

A new Banksy appeared on the walls of Reading Prison at the start of March. The artwork depicted a man escaping the prison, in what was said to be inspired by Oscar Wilde's incarceration at the now-closed prison.

Banksy's morons piece was also bought by a cryptocurrency crew, who then burned it and sold a digital version as an NFT for just over $382,000.