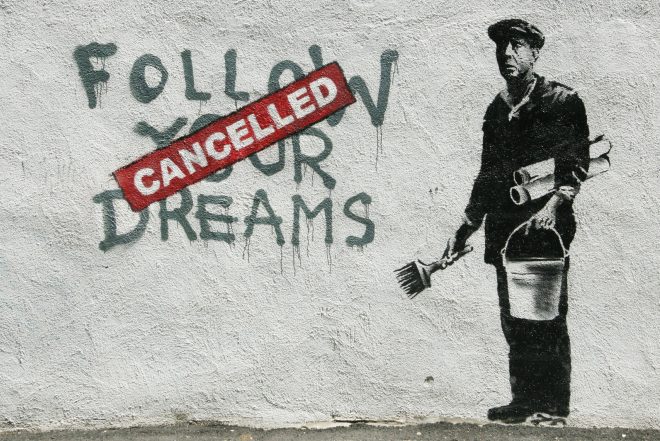 26-year-old, Colleen Alexander went viral on TikTok last week with her post explaining how she has potentially bagged two pieces of Banksy’s work.

Colleen explains in her TikTok that she was switching trains at a New York subway when she noticed pieces of artwork resembling Banksy’s previous work. She said: “There were pieces of art scattered on the subway stop floor, no tarp, no plastic, nothing protecting them,” referring to the exhibition Banksy: Genius or Vandal.

The exhibition of work was also described having “his classic ‘Cash or bitcoin only, this is not a photo opportunity’ signs, and there was no one there – the paintings were just there.”

Read this next: Banksy's seasons greetings is reportedly leaving Wales for England

After walking past, Colleen decided to return to purchase a piece. When returning she noticed a man with a ski mask covering his face standing beside the artworks. Colleen said: “I looked around and somebody gave a slight nod, and I (saw) this guy standing, full face covered. I asked, ‘Are you selling those?’ and he just nodded, he would not speak,”

This summer, Banksy travelled around British seaside towns creating graffiti murals for his series Great British Spraycation and confirmed the work was his in a short film. With no confirmation on this exhibition yet Colleen said: “Maybe I fell for an elaborate tourist trap, or maybe I made the best decision of my life,”.

Watch the full TikTok below.

@colalex Maybe I fell for an elaborate tourist trap, or maybe I made the best decision of my life #banksy #art ♬ original sound - Colleen