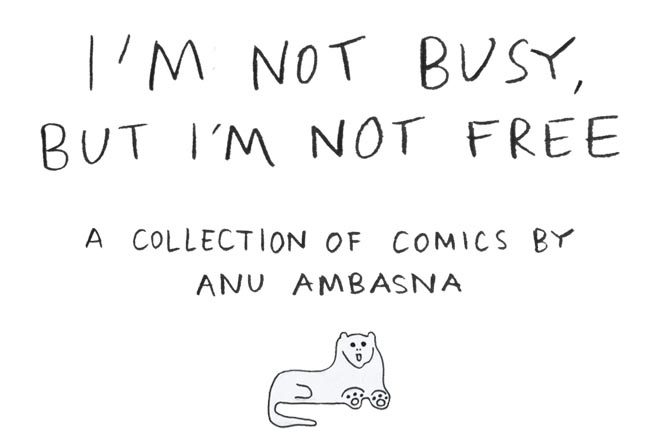 anu, the DJ, illustrator and broadcaster who hosts a regular show on NTS Radio, has announced the release of her first zine.

I'm not busy, but I'm not free is a "collection of comics and artwork" that will be released in London in early December and online early the following year.

Read this next: Pink Noise is the incendiary new zine for women interested in DJing and production

The running themes of the zine are "music, club culture & general silliness", according to an Instagram caption penned by anu.

anu is organising a launch party for the zine at Kaffa in Gillett Square, Dalston on December 5. Attendees will be able to purchase a copy of the zine

There will also be sets by DJs and vegan Ethiopian food available.

Read this next: Exploring identity: What does it mean to be a South Asian in the UK in 2021

Speaking to Mixmag, anu says: "The zine is a collection of my work over the years, but mostly art that was created over the pandemic. It draws from a number of inspirations - but mainly the world around me.

"I'm constantly inspired by my friends, the silly conversations we have and the way we're able to see humour in all aspects of our lives. Music is also a huge inspiration, alongside club culture - there are a few comics in the zine that have come directly from observing people in the club!"

She hopes that the zine acts as a form of escapism for the reader and that they can relate to some of the narratives in it. The zine includes her first long-form comic in it, Corporate Fatigue, which was published earlier this year as part of a limited pack of comics with ELCAF (East London Comic & Arts Festival).

anu is excited for people to see the zine as most of her artwork has only ever been viewed in digital format, she says that readers having a physical print copy can help them see "the smaller details" that could have been missed before.

"Expect lots of colour!", she tells us.

Every other Wednesday between 11:AM and 1:PM, anu has a fortnightly spot on NTS Radio.

As a DJ she has also played festivals and events such as Body Movements and various Rhythm Section parties - where she was label manager.

She's delivered themed programs on 4AD before, such as Taiwanese new wave and a Diwali special. She also designed and created the artwork for Daytimers' second collection, DT002.

To find out more about her zine and the work she does, visit her website here or her Instagram here.