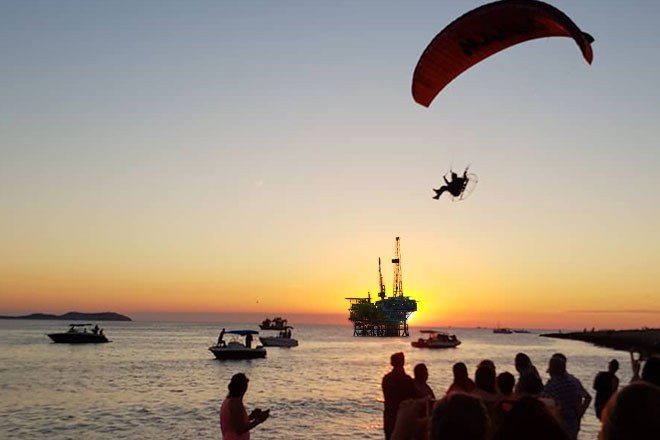 An oil rig is to be built off the west coast of Ibiza, blocking the island’s iconic sunset.

Spanish contractor Tonto Perforacion has won the rights to start drilling off the shore of San Antonio, the famous White Isle town famed for its beach bars that offer spectacular views of the sunset.

Venues like Cafe Del Mar and Cafe Mambo that invite DJs to soundtrack the sunset draw hundreds of revellers every night and have become the stuff of Balearic legend.

But the mammoth €800 million oil rig that will begin drilling this spring is so big in scale that it will block the viewing of Ibiza’s legendary sunset from all vantage points in San Antonio.

Ibiza’s Department for Uniting Nature and Commerce for the Environment issued a licence for drilling earlier this month, saying that dwindling local government resources were behind the move.

“Ibiza cannot rely on the popularity of nightclubs alone,” said D.U.N.C.E chairman Davide Cretino. “Who knows how long the tech-house money will last? Our future is in peril. We’re already losing millions because people are going to Croatia where I’m told bottles of water cost just €2. It’s insanity.”

The ginormous oil rig will cast a long shadow over iconic Ibiza venues such as Cafe Del Mar and Cafe Mambo, where people have gathered to watch the sun set for generations. Many other venues along the west coast face a similar dilemma and have set up a focus group to come up with a solution to the premature darkness the oil rig will bring to their traditionally sunny terraces.

Dion Cheddar, who represents the Association for Sunset Security, said: “We’re contemplating erecting a 500-metre LED screen in San Antonio to broadcast the sunset every night. It’s obviously not the same but could lead to some interesting business opportunities - we could show the sunset at any point during the day for anyone who missed it the night before. Maximising and monetising moments like this is what Ibiza’s all about.”

The news has shocked the local community and everyone involved in the island’s club scene, with some taking a far more radical approach to the oil rig.

Ibizan shaman Alejandro Juvenile plans to erect a magnetic forcefield around San Antonio in order to protect it from the hands of the oil contractor. “We must summon the power of Tanit, the goddess of Ibiza, and banish these demons,” he told Mixmag. “I will create an ayurvedic mindstate that the oil rig will not be able to penetrate. As long as my parents pay for my flight back from Peru, I’ll be there.”

These are dark days for Ibiza. Worse even than when they put the roof on DC10. But one plucky British tourist didn’t seem to mind: “They can take away our sunsets but they can never take away our freedom! And this way I won’t have to spend so much on sun cream.”

How much does it cost to spend a week in Ibiza?
Why Ibiza is better now than back in the day
How to have the perfect 24 hours in Ibiza