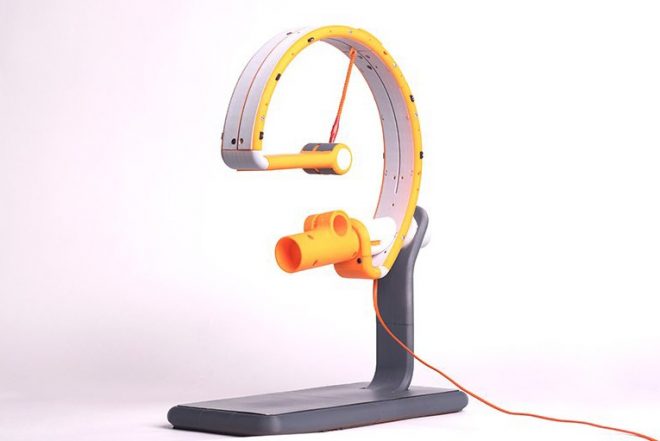 The device was developed by Israel-based Itai Shir Moskovitz for his graduation project. The industrial designer wanted to recreate the physical connection one has when playing a physical instrument- something he thought was missing in the process of producing electronic music.

Hence, when users integrate FUSE into a live set, audience members can see how the sound being produced corresponds with the movement of the body.

Read this next: Roland has recreated the Juno 60 as a software synthesiser

One of the mechanisms within FUSE is the ‘slip ring,’ which lets wires move through a rotating cylinder without disengagement.

It also contains a drum rack, which allows the user to control over 3 parameters of a digital synthesiser at once.

Further development Moskovitz’ is taking three potentiometers that usually exist within a standard MIDI controller and using them as three axes to produce 3D movement.

He explained to Designboom: “It was important for me to examine new movements and gestures that express more deeply the connection between the sound produced and the movement of the producer.

“Just like my experience with playing the guitar: when I play, I do not simply hit a key, but instead I perform strumming movements that have their own unique nature.

“I believe that the connection between the musical instrument and the musician is integral to the musical endeavour and embodied experience of playing music, as well as watching it.”

Read this next: RIP Simeon Coxe: An electronic music inventor who defied time


The physical development of FUSE drew on the visuals of an electric violin and involved a combination of 3D printed models and electronics platform Arduino.