I didn’t pick my name, my parents did and it’s not like they called me something memorable like Nina Kraviz, Sven Väth or Seth Troxler. This is the quandary that faces the musically-inclined Anne Taylors and John Smiths of the world. I mean, there’s a reason Norman Cook goes by the name Fatboy Slim. An artist moniker needs to be memorable, timeless, relevant and above all else, able to elevate said individual above the mundane. But sometimes people take it a little too far. 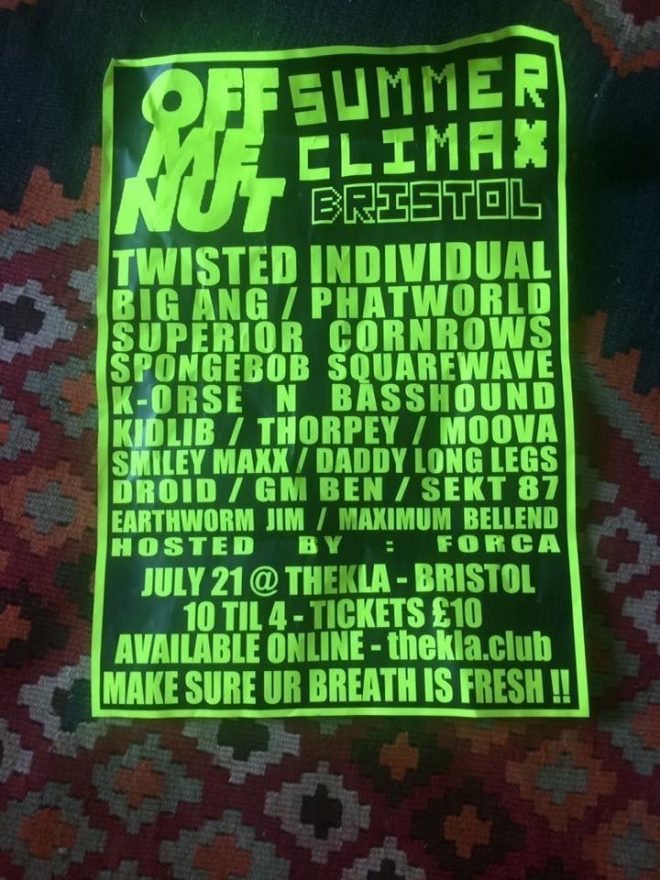 This flyer is our Rosebud, if you will. The reason I have fallen down a perpetual wormhole of bizarre DJ names. It was found in Bristol, a supernatural place where DJs like Superior Cornrows, Spongebob Squarewave and Daddy Long Legs run free and thrive. But the one that really caught my attention is right at the bottom, squished away in a corner as if in total opposition to its very essence. Maximum Bellend.

We give plenty of coverage to artists with normal names at Mixmag (and probably some silly ones in retrospect). We’ve even looked into how dance music’s biggest DJs got their name, but what about the artists whose titles are so crazy that they're reduced to a joke?

Do they make their own music? Do they simply live on Bristol club night flyers? It turns out that Maximum Bellend was just the tip of a DJ name iceberg that turned into a stream leading to a giant ocean of bad puns and visceral word play.

Hardcore, crossbreed, hard d‘n’b, breakcore and hardcore techno selector CUN7 has shared a bill with Maximum Bellend at the BangFace weekender, which is kind of like a convention for people who hold signs that say ‘rave our souls’ without any hit of irony. Yes, it’s meant to read "cunt" but as Ellis (his real name) tells me, it’s a good way of getting through those pesky "offence filters".

"Typically I pronounce it as 'cun seven', especially on a Sunday, but I am not averse to being referred to as cunt, which is often the case when I am booked or when referred to in spoken form by others."

Somebody once asked him to change it to CUN8 on a flyer (which doesn't really have the same ring) and when he goes b2b with his friend Skanky Hoe, they operate as Skanky CUN7. Apparently no one has ever been offended by that.

DJ Skull Vomit is also a part of the breakcore scene. It's a strand of music that marries screaming death metal vocals with the stampeding kicks of gabba and includes DJs such as Passenger Of Shit, Goreshit, Shitwife, DJ Rainbow Ejaculation, Ladyscraper, Gut Plumber and DJ Dog Dick. But where CUN7’s SoundCloud contains his own aggressive but not shocking productions, DJ Skull Vomit’s music is like listening to copulating foxes while suffering from an aneurysm. Not that his 4000 followers on SoundCloud seem to care. He's not some no-name toiling away in his parents' basement. Yes, it’s an admittedly niche scene, but then so was house music once. The only thing I didn’t get was why not produce under his real name and really own that sound?

"Tony Welter doesn't exactly ring out as an unforgettable DJ name. I did however use my last name to my advantage when making an EP titled 'Welter Skelter'. I kinda recreated the Tate murder, but used Skrillex, Deadmau5, Pauly D and Steve Aoki. I know, pretty offensive, but nothing rhymes with Welter."