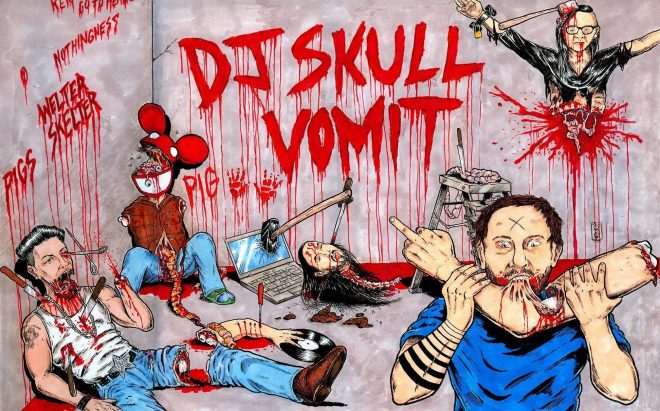 During our conversation, DJ Skull Vomit also name-checked an artist I had already heard of before. Shitmat always sounded like an urban myth but Henry Collins is not only a real person, but he's undeniable proof that a bad name isn’t always a hindrance. Having got his start on Planet Mu, he's also created aliases like Andrew Lloyd Webber's Retard Crack Dealer, DJ Ham And Cheese Sandwich, Armand Van Hard-On, DJ Dogshit and DJ Pillbong, which he somehow thought was worse a name than Shitmat.

“It has been an issue, funnily enough with Slipmatt who took offence when we played on the same bill together and made the promoter move me to the bottom of the line-up on the poster and put me in small text. He also wasn't happy I sampled him, calling it 'a travesty',” he said.

Someone who amazingly hasn't had any issues with his name is DJ Shag Girls, another BangFace weekender alumni who manages to delicately blend appropriation and misogyny in one moniker. Luckily he doesn't care about who he pisses off.

"I started out DJing ghettotech and booty music. That sort of music has a lot of pretty sexist lyrics which my girlfriend at the time didn’t really appreciate," he told me. "When I was starting to upload mixes I needed a name and she sarcastically suggested DJ Shag Girls. [It] stuck straight away, mainly because I knew it would wind her up."

So it was all a joke was it? Haha, music is funny.

But as he soon found out, the joke ran dry and so did the tunes and mixes on his SoundCloud. He didn’t seem too fazed though, all that mattered is he got some gigs from it.

"Nowadays I suppose the only reason I keep it is because that's what my online presence is known as and I can't really be arsed starting from scratch again. Also looking like you're taking yourself too seriously or seriously at all is pretty lame."