At this time of year, sunset in the Tunisian desert is something you can taste. As the light gradually retreats beyond the western horizon, a tempest of sand rises in its place and rolls in the other direction. When it hits it fills your vision, stings your eyes and works its way between your teeth. It’s coarse and irritating, and it gets everywhere.

It’s worth it, though. Standing on the ridge of a sculpted dune like a Tuskan raider, watching the sunset fill the sky beyond the achingly familiar domes of the buildings George Lucas and his crew built in 1977 for the movie they were then calling Star Wars: From The Adventures of Luke Starkiller, beats throbbing from two DJ stages, is a heady experience. Les Dunes Electronique’s mix of nostalgia, nature and leading-edge festival culture hits like a kick from a Bantha.

We’re pretty isolated out here, in the northern reaches of the Sahara desert. The nearest town is the oasis of Nefta, 10 miles due south on a gently curving, pristine new road. It was a seven-hour bus drive from the capital, Tunis, the landscape gradually changing from green to pale beige, rust and sandy gold. The isolation, says Festival Director Matthieu Corosine, is the biggest challenge. “It’s so far away from everything,” he says; “we have no resources: no electricity, no toilets, no water, nothing, so we have to build everything from scratch. And if you forget something, it’s three or even seven hours away by car or truck!”

Read this next: "We come to dance": Motherland is the epicentre of London's Afro house movement 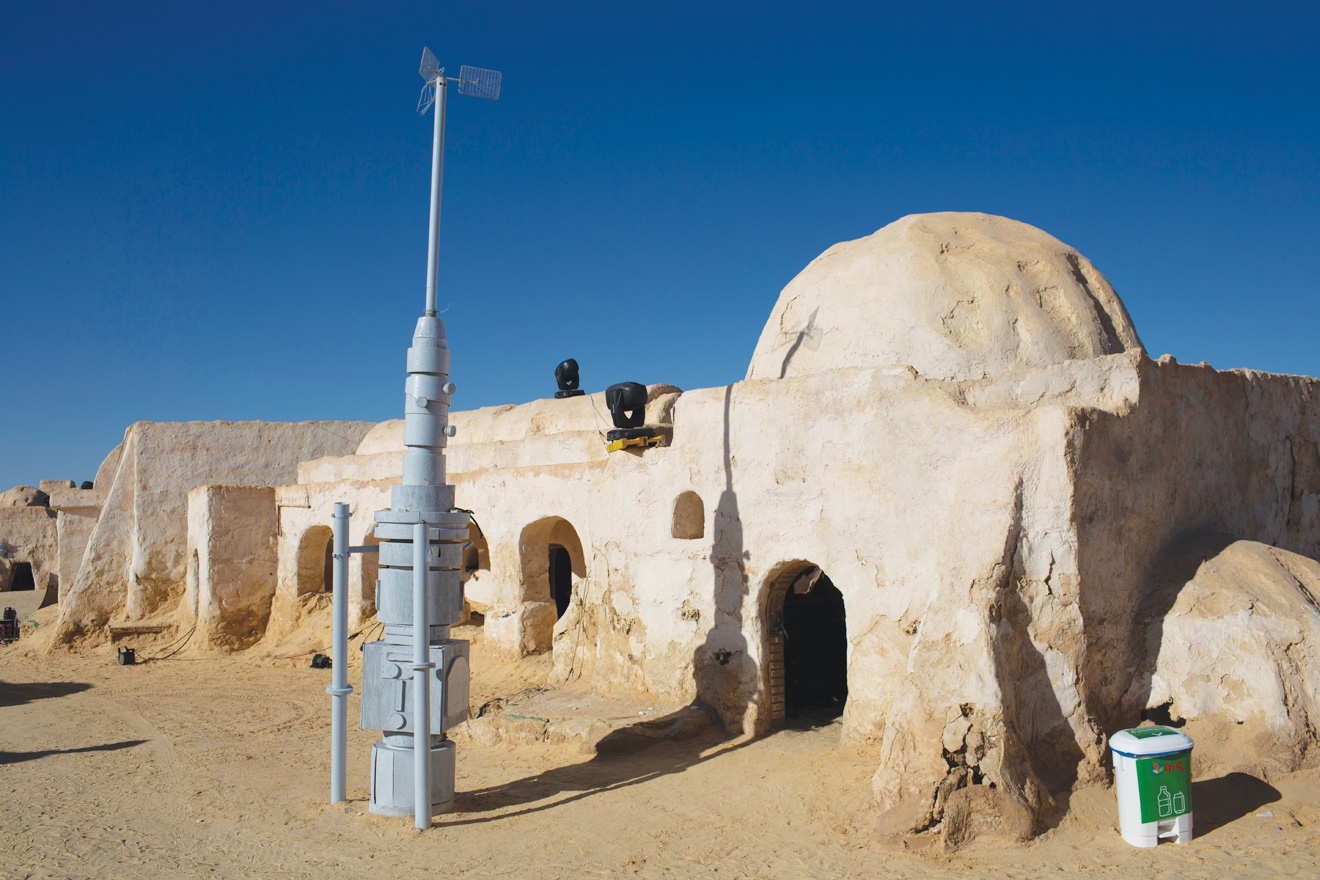 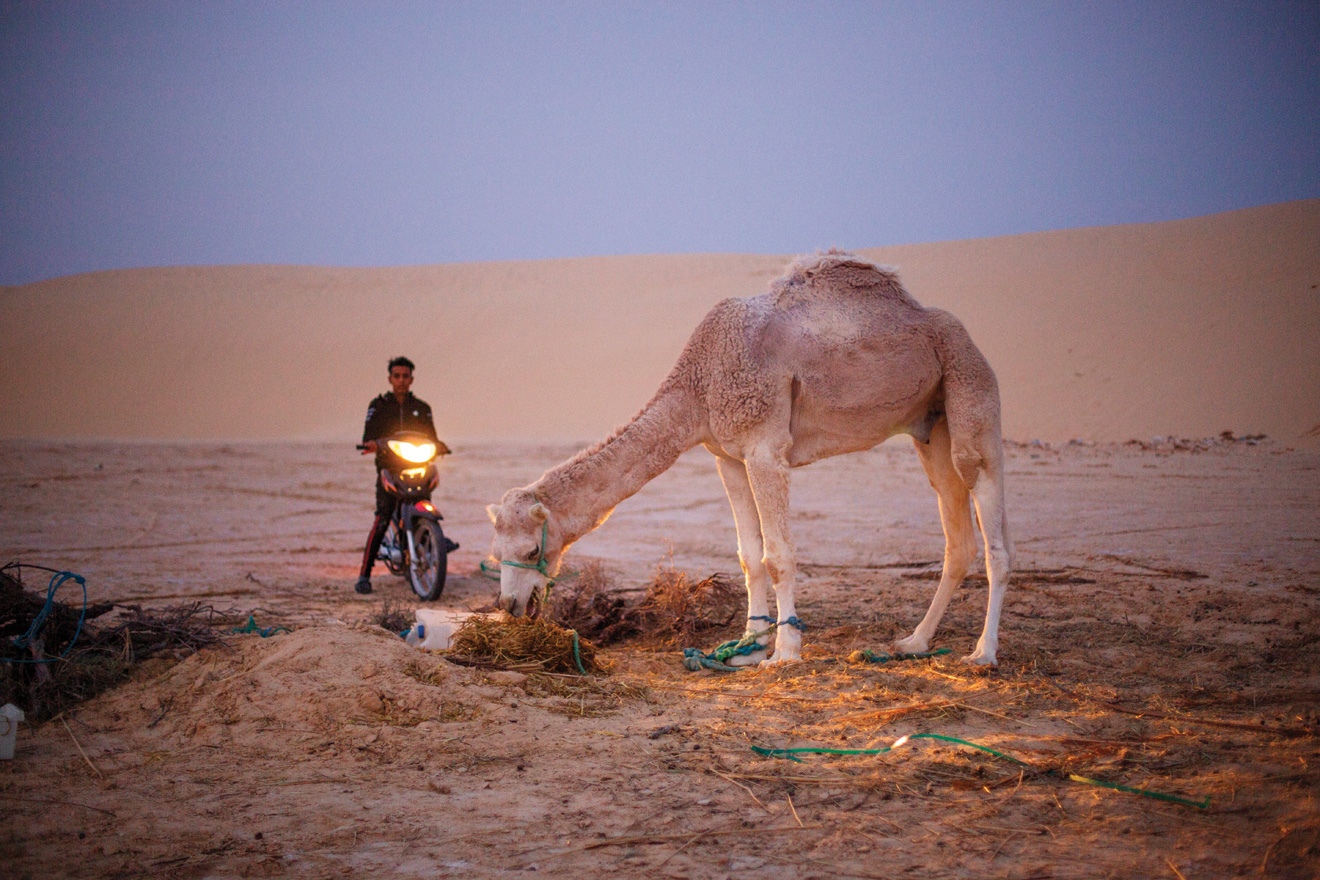 The idea came to Mattheiu and his partner in Panda Events, Benoit Geli, when they met the owners of a Tunisian hotel at a beach festival in Nice. Invited to celebrate the end of the season at the hotel, the stunning Dar Hi in Nefta, a trip to the ‘Mos Espa’ site had them struck with its potential. That trip was in 2011, in the aftermath of the Arab Spring which saw Tunisian people rise up against the country’s dictatorship, but the political situation wasn’t stable enough for the first festival, says Matthieu, until 2014. But by that time, he says, they had another problem: “Forty per cent of the site was covered in sand! The dunes here can reclaim a site this size in three weeks.” A Kickstarter project and an invitation to fans to help rehabilitate the set, which despite surviving four decades is a fragile one (“it’s made out of nothing!”) saw it returned to its current condition – and its status as a key tourist destination in this part of the world.

Happily, that 2014 debut coincided with Tunisia confirming its democratic constitution – and this boutique festival in the desert, planned for 1,000 people, became a focal point for celebration, over 7,000 people making the journey to celebrate ‘the new Tunisia’. The connections with local partners (“they know the tricks and they know how to not hurt the environment”), especially the tourist board, says Mattheiu, are key in making Les Dunes Electroniques possible. A chance meeting with the Minister of Tourism on that first trip to Nefta began a partnership that sees the authorities help with everything from security and press arrangements to convincing the national airline to put on more flights to nearby Tozeur. Clearly they also recognise the potential of events like this to help in the struggle to rehabilitate the country’s tourist industry since the attack by a terrorist on a hotel beach in Sousse in 2015, which decimated visitor numbers. Package holidays returned in 2017, but UK tourist visits, while steadily rising again, were in 2018 still only a seventh of what they were. Certainly, LDE takes on-site security seriously. A perimeter has been set up in the desert, and soldiers man the gates and checkpoints on the road, though inside the compact site itself the presence is civilian, low-key and mostly confined to controlling entry to different areas. 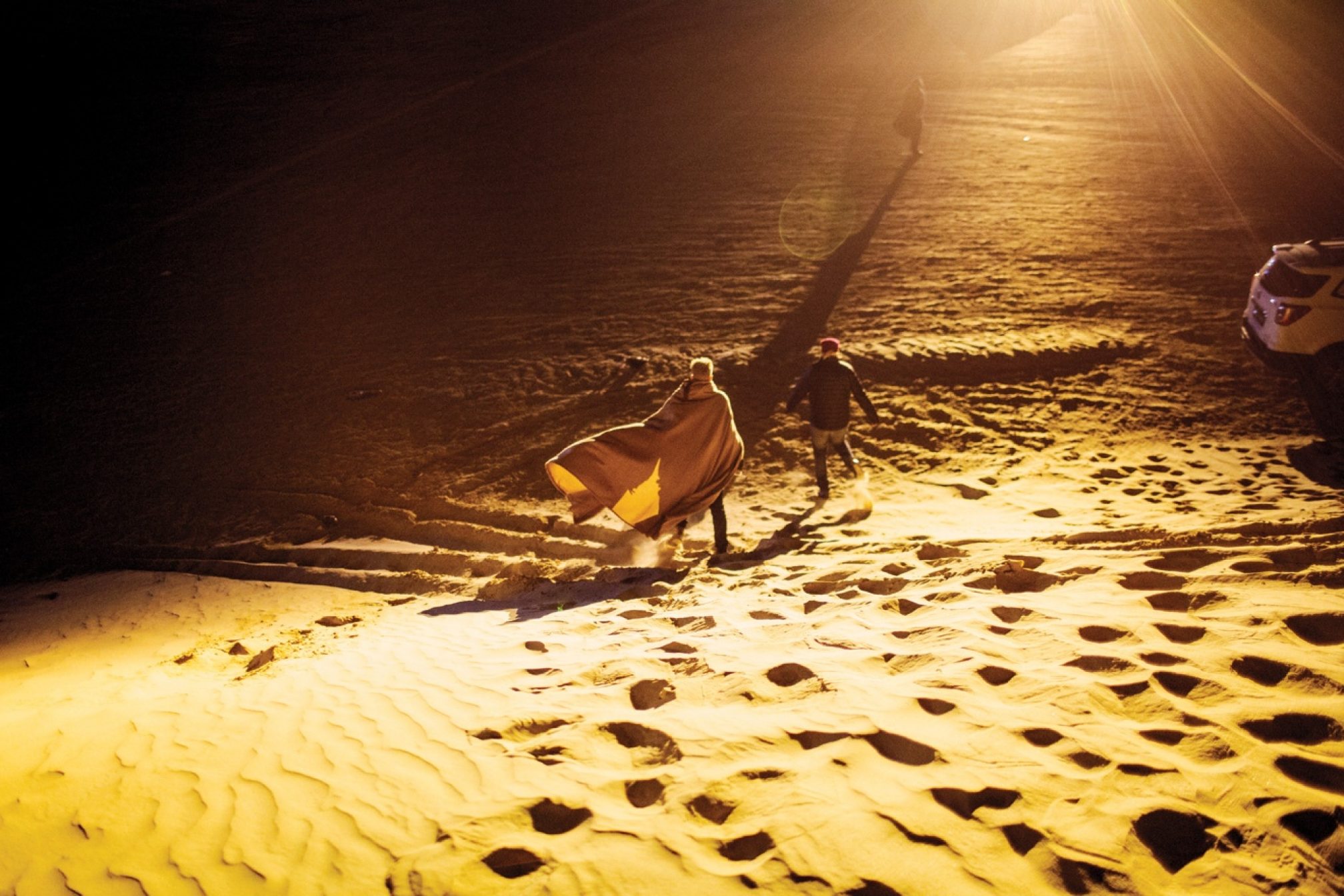 The main part of the festival is set up around the outside of the Mos Espa set itself, the bulk of which is open only to certain ticket holders, artists and over-awed journalists doing Alec Guinness impersonations. Some of the domes and blocky buildings are carpeted with blankets and the odd table to create perhaps the most picturesque green rooms of all time. At night it’s lit up with coloured floodlights which make those iconic silhouettes stand out even more. Facing outwards at each end are two stages: ‘Sunset’ and ‘Sunrise’ (named for the direction they face, they’re both open straight through for the 30-hour duration of the event, from Saturday afternoon to Sunday night). A long VIP tent runs alongside the ‘village’, lined with rugs and dotted with low couches, and there’s an indoor arena on the outer rim of the site where on the first night we take brief shelter after our trip to the dunes. Most of the action takes place in front of the stages and around the edge, and beyond the fence during the day roam camels led by cheeky youths insistently offering rides and souvenir selfies at a price to those scrambling over the dunes.

The crowd this year is more manageable than that 2014 bumper attendance, but once again it’s mostly Tunisian (80/20 locals/foreigners, says Matthieu, adding that many come all the way from Tunis on what might be their first trip to the desert southlands). Most Tunisians speak Arabic and varying degrees of French – a legacy of the colonial days – but one English speaker we meet while wandering the site is Marouen Ferchichi, a slender 24-year-old social media manager from Tunis with a halo of curly hair. “It’s funny,” he tells us; “we see on the news that the Tunisian economy is in bad shape but the clubs are always full! People will find a way to spend fifty dinars a night [about £14]”.

Read this next: The Ballroom Blitz is building a sustainable scene in the Middle East's party capital 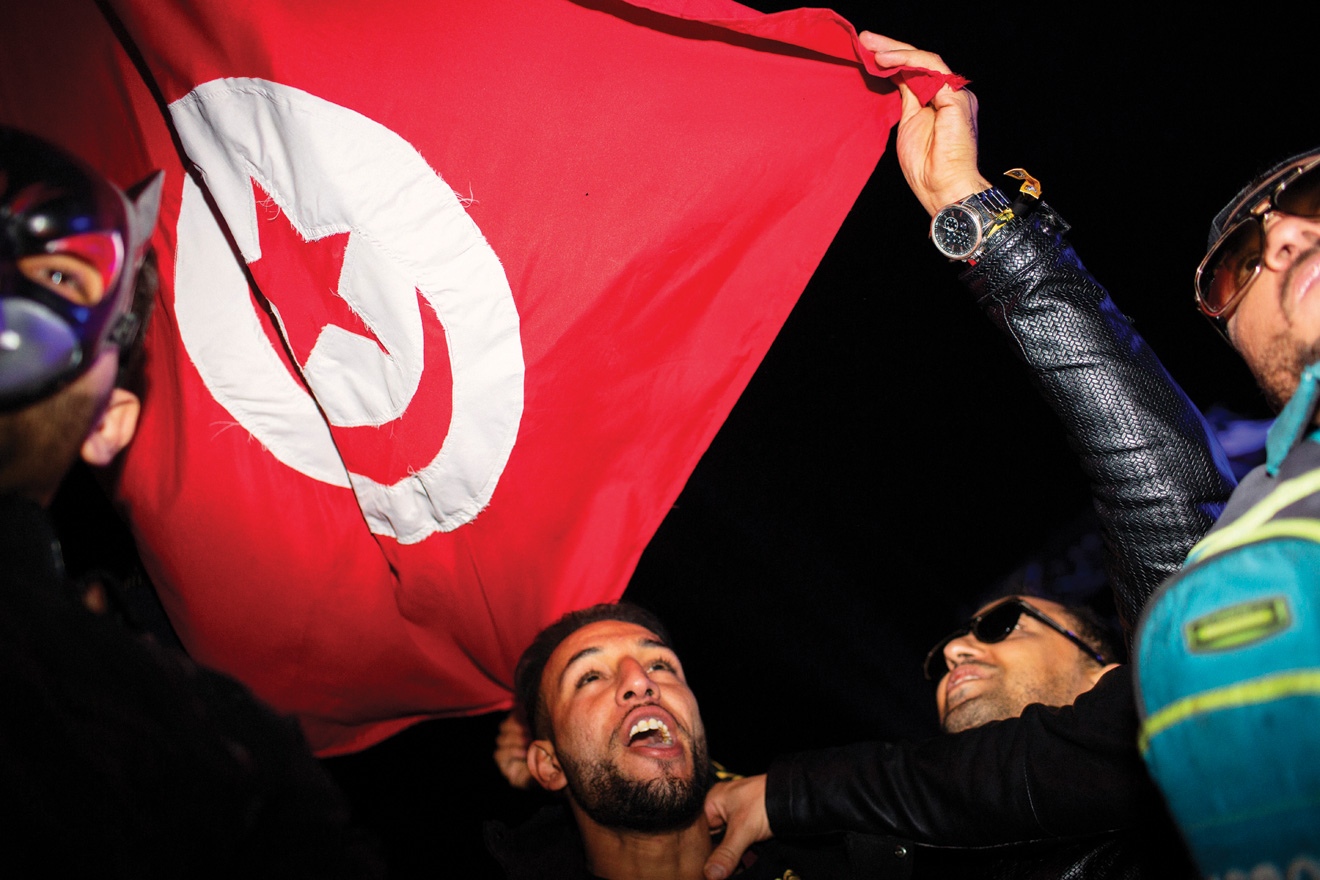 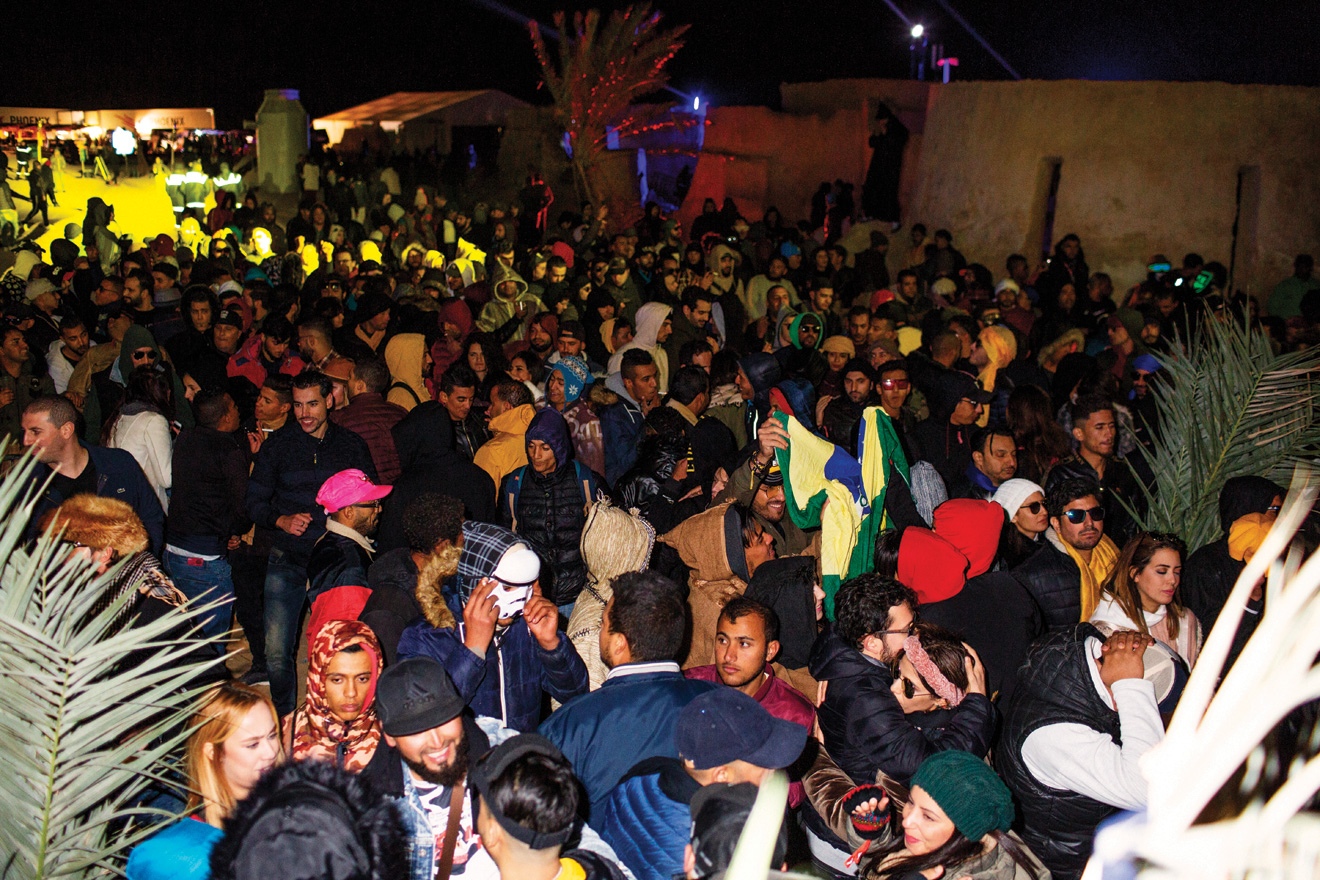 Marouen says that the scene in Tunis right now has grown massively in the past five years, with 20 active clubs in the city right now, and that a lot of the time it is artist- and label-led. “Before there was just live music, no DJ culture except amateurs. Now people are starting to produce they can get the equipment, and the new labels rotate around the clubs, also inviting foreign underground DJs.”

He name-checks Wax Bar in Tunis, which just celebrated its fifth birthday and has brought over Europeans like Bellaire and Feel Fly (interestingly, it also puts on parties with a local audio equipment store, emphasising the link between access to technology and the new wave of creativity). The music that predominates he says, is house – more accessible to the country’s young scene, though his own favourite right now is young three-piece Terra Negra, who play blend of house and afro music.

There’s a good proportion of Tunisian artists on the bill for LDE, and the likes of Hazem Berrebah and particularly Noy Ära more than hold their own against big names like Stimming and Apollonia. In this unique setting, it’s clearly less about reputation and more about the ability to reflect and enhance the environment; for example, Sunday afternoon’s dreamily eclectic live performance by French duo Parallels on is perfect. It’s also, quite frankly, says Matthieu, down to finding DJs who are willing to make the long trek to the desert for fees that are far less than they might get in Europe: “they need to have the will to participate in this adventure,” he says.

Mattheiu reckons they will never make money from LDE, but they still have ambitions to expand, add a proper campsite and encourage more overseas visitors, perhaps hold more concurrent events in the nearby town of Tozeur as well. And beyond the photo opportunities and the sugar rush of partying in a place so familiar from so many of our childhoods, there’s something else at work in Les Dunes Electroniques, something more powerful. “There is a perception that electronic music is still underground here,” says Marouen, “still a way to celebrate political freedom.” An energy field, connecting us all.