Does the world really need more music festivals? As the Guardian noted in a recent editorial, the market is getting flooded, and amateurish productions are springing up at an alarming rate (like the disastrous Fyre festival). Considering the expense and the bodily toll, a bad festival experience can be a summer-ruining affair, and in 2017 it’s fair to be wary of any new event.

On the surface of it, the debut Houghton festival, which took place in the Grade I listed grounds of Norfolk’s Houghton Hall across August 10 to 13, looked like a sure bet for a cracking weekend, with the team behind Gottwood helming the production, a 24-hour music licence secured, and Craig Richards curating a mouth-watering line-up across nine musical stages, including the leafy audiophile lounge of the Brilliant Corners yurt with a system provided by The Analogue Foundation. It delivered on all this promise and more, providing one of the finest festival experiences we’ve ever had.

The music was flawless, the systems were weighty, the site was charming, and the 24-hour licence was a game changer for the UK festival circuit. The country has been lagging behind European nightlife hotspots such as Berlin and Amsterdam for nonstop party weekends for years, and Houghton proved we’re more than ready for the juggernaut session. There was a strong sense of blissful looseness coursing through the weekend. With no moments of quiet, and no direction of when to go to bed, the festival arena was a revolving door of ravers freely rolling in and out of world-class sets at their own pace - save for the occasional peak-time queue for certain stages.

The front-left crew chose to forego sleep almost entirely, while others got their beauty kip in and took time to enjoy the artistic sculpture parks and film viewings on offer, or relaxed in front of the serene lake. There wasn’t a spare second of Houghton that felt lifeless, no end-of-the-night instant comedown as you crave one more tune, just relentless good vibes wherever they were sought. Come the close of Monday morning, there were still a collection of dancers pumping Eurodance and disco in the campsite corridors, unable to let go of the thrill of the weekend.

Refinements to the queuing system, ensuring the crowd levels remain intimate, and a stronger female presence on the line-up would be welcome moving forward but on the strength of its opening year, Houghton already looks like an essential dance music destination. We think it has all the potential to take up a heralded position among the European festival elite.

Here are 9 tracks that guided us through the weekend (full 100-track playlist here)...

Arriving on Friday night, we immediately threw ourselves into the Quarry, a dug-out land pit surrounded by colourful spot-lit trees that was transformed into a cauldron of energy by Joy Orbison. He whipped up the crowd with a deft selection of soaring euphoria and harder-hitting selections, spanning lush piano chords to searing UK techno. Chekov’s ‘Rotlicht ’ bended minds and a ‘Hackney Parrot’ edit had hands reaching for the sky. But the biggest moment came in the form of a potential new Four Tet release that the iconic UK producer has been airing recently. The infectious vocal and jittery musical base sent everyone to ecstasy.

Ben UFO has deservedly become one of the world’s most in-demand DJs and he’s now at the helm of a gig schedule that makes Alexey Stakhanov look bone idle. Over the course of four hours he pulled the thriving crowd in all sorts of directions, drawing for wiggy minimal in the shape of Ricardo Villaobos’ ‘Mormax’, Kenny Larkin’s stuttering big room remix of ‘Future’, a host of 90s tech-house and a healthy dose of feel-good garage kicked off by the above classic. Ben UFO has the range.

Taking us through to daylight on Friday night was Romanian minimal master Raresh. There was no sign of energy levels flagging as the expressive DJ pumped out a stream of skippy house bangers, such as A. Oshana’s aptly titled ‘Eccentric Electrics’, punctuated by metallic, sprung percussion, jumpy synth lines and rolling basslines. His demeanour behind the decks was as engaging as his music, contorting his body and pulling broad grins as he breezily mixed through his enviable record bag. It made up for the bare display of the Warehouse, which was one of the less visually interesting stages on offer: a semi-enclosed hangar decorated only by a spiral of lights at its head, and filled with disorientating levels of thick smoke at random intervals. Sunlight creeping in through the open sides and a view of the breaking morning sky as Raresh journeyed into ambient territory was a nice touch, however.

The place to be on Saturday night through to Sunday morning at Houghton was the Pavilion, with Radioactive Man, Nicolas Lutz, Ricardo Villalobos and Craig Richards among the acts on rotation at the tree-covered forest stage. One of the more surprising gems of the evening however was Adam Shelton taking charge of a two-hour electro-themed set. The 24-hour licence at Houghton meant there was plenty of time to be allotted for artists to experiment and perform untypical sets, which served up expectation confounding brilliance such as Shelton’s Pavilion appearance. The Birmingham mainstay proved his record collection goes far deeper than the tough house grooves he’s become known for, moving through an explosive set of Detroit-rooted electro thumpers. 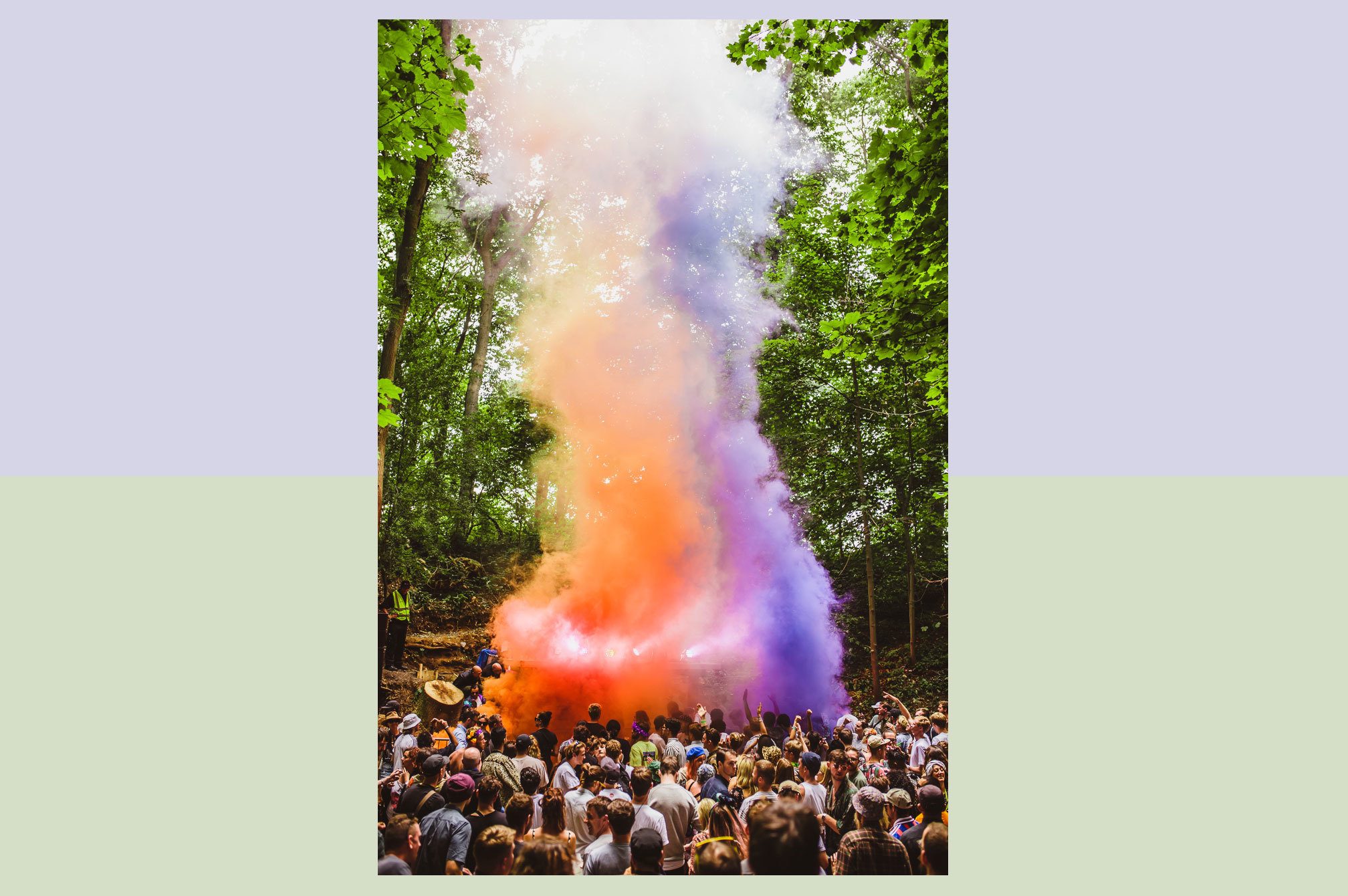 The Pavilion was at breaking point by the time Ricardo Villalobos and Craig Richards stepped up for their centrepiece back-to-back session at 3am, and over the course of the eight hours the duo transported the heaving woodland to another realm. Starting slow and hypnotic, the pair gradually ramped up the energy. Soon the Pavilion felt like its own contained universe, and we lost all perception of a life outside those colourfully glowing trees, sucked into a vortex of head-spinning sounds. As the official timetable shifted into Sunday, Ricky was in full trademark teasing mode, chopping ‘LFO’ (Leeds Warehouse mix) into Detromental’s spinback-embedded ‘Rewind’ for what felt like an eternity. When the Warp classic eventually blasted in fully, only the voices that had croakily been lost to cigarette abuse weren’t screaming approval at the top of their lungs.

While Ricardo was doing his thing, fellow Perlon and Panorama Bar favourite Margaret Dygas took control of the exquisite Terminus stage, moving her audience classily from end-of-night fatigue to new-day vigour. Her relentless stream of seamless, unfathomable grooves graced by bouncing hats, off-kilter noise and subtle tangents demonstrated the full breadth of her minimal spectrum. The set was a masterclass in dynamics, in energy and in audience immersion. Playing to a transitional crowd that became both more and less fresh-faced as the skies brightened, Dygas staked her claim as one of the most exciting DJs at the festival.

The odds that Craig Richards got any sleep at all over the course of Houghton seemed low, with the curator racking up upwards of 20 hours on deck across the weekend. If he was flagging come 4pm on Sunday, five hours on from finishing his mammoth back-to-back with Villalobos, he showed no signs as he linked forces with Nicolas Lutz for another titanic two-way session at the festival’s “secret stage” Terminus. Situated just outside the entrance and away from the main arena in a small carved-out circle in the forest, Terminus was like a perfect balance between the Quarry and Pavilion, providing both locked-in energy and enclosed intimacy, with better sound than both. Richards and Lutz were in their element in this setting, pushing each other with records that were both sparkling and banging. Amato’s scorching electro powerhouse ‘Physique’ marked the most intense moment, while Scan 7’s effervescent ‘Black Moon Rising’ saw the pair at their most transcendently funky.

On the final night of a festival, euphoric vibes are high up on the agenda. Reality is dawning, and a final opportunity to lose your mind in a sea of silliness and exultant sounds has to be grabbed with both hands. Gerd Janson was the perfect DJ to provide such feelings, treating the heaving crowd to a masterclass in jubilation. Anthems featured by the bucketload, such as his new ReGraded collaboration with Shan ‘Surrender’, HMC’s adrenaline shot to the vein ‘Marauder’, and Pangaea’s hard-edged new edit of Nomad’s ‘Devotion’. Those familiar with Janson’s Essential Mix from earlier this year will recall the jet of clicking dolphin noises cutting across the duration, and they featured in all their wacky brilliance here, getting us so hype that we wanted to back flip out of the sea of dancers in a style akin to the water-dwelling mammals. By the time an Alma & Mater edit of ‘Born Slippy’ closed proceedings, we were on the verge of tears, overwhelmed by the joy of it all.

Taking the reins from Gerd Janson, compatriot Roman Flügel was tasked with delivering the final set of weekend in the Pavilion, and executed his role with aplomb. Opening on some spooky, atmospheric techno, giving the crowd a moment to breathe after Janson’s hit parade, the Frankfurt native soon settled into a groove of pulsating, limb-pumping records that were primed to keep jaded bodies moving like clockwork until curfew. Hugo Massien’s ‘Swerve 2’ and Objekt’s ‘Needle And Thread’ were both moments with a capital M, and KiNK’s ubiquitous remix of Unit 2’s ‘Sunshine’ had a section of the crowd taps aff and swinging t-shirts in the air, protected from the chill of the British summer’s morning by the heat Flügel was bringing in droves.