There’s a brief parting of the clouds in the infamously windy outskirts of Belfast, as AVA founder and director Sarah McBriar looks up to the sky with a hopeful expression: “I have never, ever checked the weather app so much in life!” she exclaims. “This festival is like my 7-year-old child, I just hope everyone is having a good time.”

She needn’t worry, of course, the Belfast faithful are out in full form, running eagerly from the beer tents towards the three stages every time they hear an injection of bass. Everyone is kitted out in their raving best: think enormous bucket hats, mullets, neon sports shirts and extreme high-heels. Groups of pals are talking just that little bit too loudly; though gates have been open for just a few hours on a Friday afternoon, it already feels packed. The crowd are throwing their hands in the air, mesmerised, bright smiles across all faces.

Read this next: AVA excited and inspired a 5000 strong crowd in London

The mood is jovial, but it’s impossible to ignore the reason why this is particularly special for the Northern Irish crowd, they have been waiting for far too long to go raving. 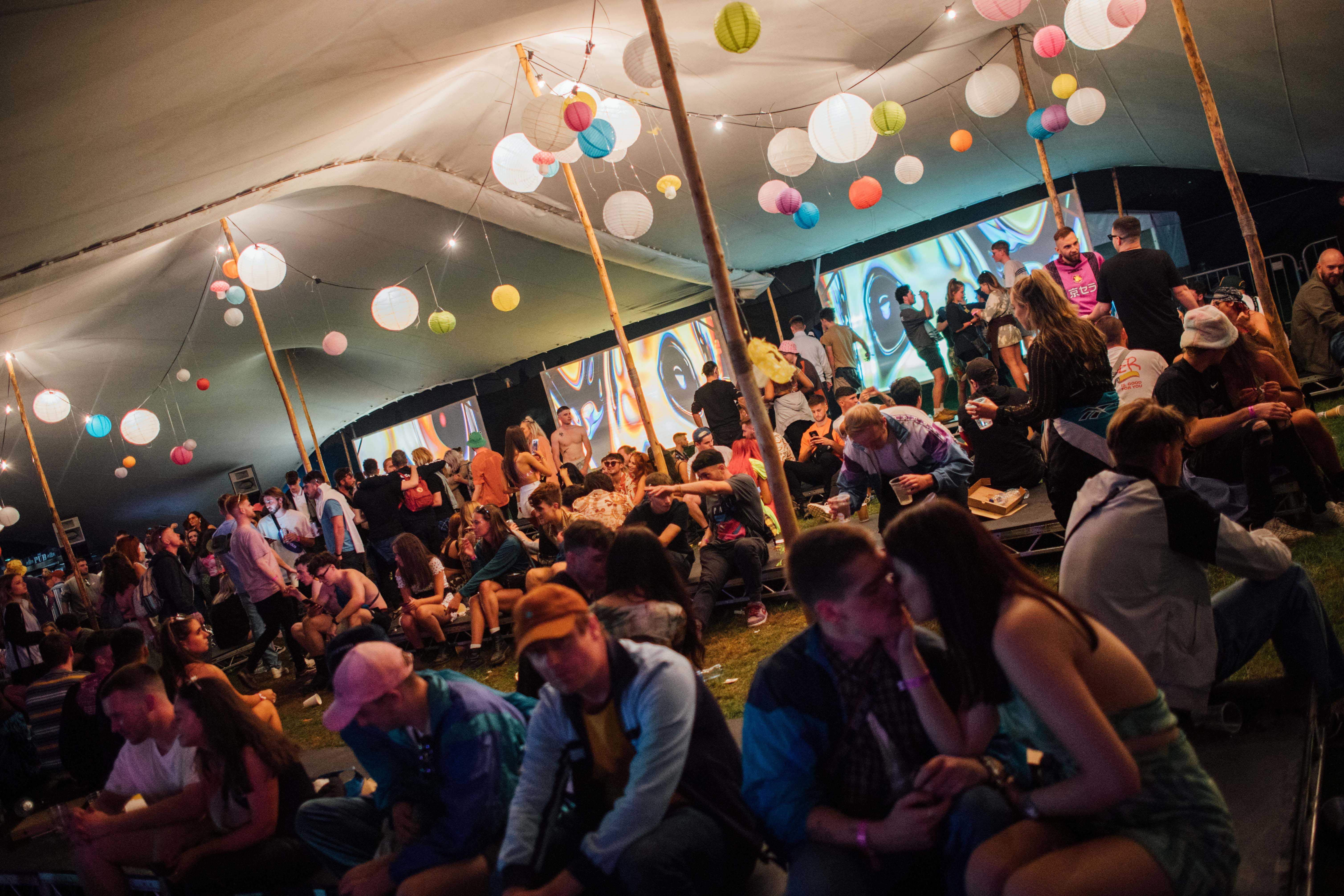 Nightclubs in Northern Ireland are still closed, as they have been since March 2020 (they will be opening again on October 31 as announced on Thursday), with non-seated indoor gatherings prohibited for crowds of over 15 people without a COVID-19 risk assessment. Outdoor live music is permitted, but there have only been a handful of electronic music events in the country since then.

For AVA, being the largest of all electronic music events to go ahead since the beginning of the pandemic, COVID-19 restrictions have turned it into a bit of an anomaly. The usually warehouse-focused festival is now outdoors, the only way that a large-capacity event can happen under current guidelines. All attendees have to present proof of double-vaccination or have a negative lateral flow, and mask-wearing is required (and enforced by security) when buying drinks at the bars, but not at the various other vendors - oddly.

Read this next: Nightclubs set to open in Northern Ireland at the end of October

The mood, as a result, feels more “festival.” There’s mud, the smell of burgers in the air, pop-up stores selling vapes, the crunch of hordes of empty plastic beer glasses under your feet — none of which the festival had much of before. Instead, it used to feel more like a day party in the same vein as large scale venues such as Printworks or Warehouse Project. From the offset this feels like a different festival, instead of edgy and intoxicatingly industrial, there are pretty twinkly lights in tents, hung-up lanterns — even the flags at the top of poles blustering in the wind that you can find at pretty much any field festival in the UK are here. 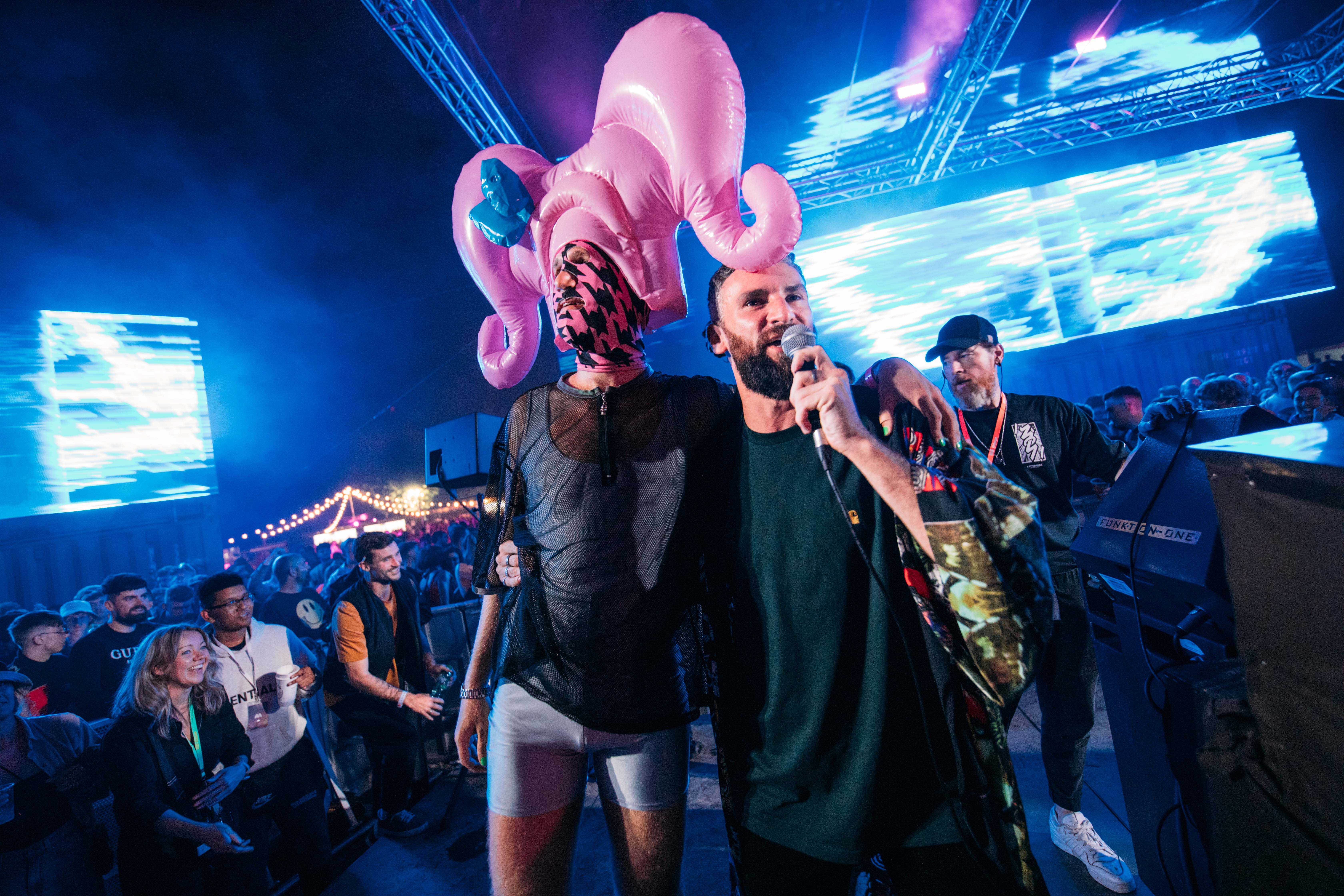 At the Surround stage, where much of the day's Boiler Room sets are being streamed from, there is an attempt to recapture that industrial element, flanking the decks with huge shipping containers stacked on top of each other. Similarly, The Nomadic, a glass-topped structure with shipping containers at its entrance, evokes the setting of AVA’s old greenhouse stage at its former home in the old B&Q just five minutes up Boucher Road. Whereas The Grasses, a large canvas tent set at the other end of the site feels like a real deviation for the Belfast festival. It offers an intimate atmosphere with acoustics radiating from every tent pole during sets from local selectors as well as live instrumental and vocal performances from the likes of Kojaque, Gemma Dunleavy, TK Sax, Aby Coulibaly and more.

The pride and adoration are palpable when watching the crowds interact with their homegrown heroes: Holly Lester has the throngs melting through LWS’s remix of Bolam’s ‘Forgot My Brain’, jackets being spun through the air as she expertly negotiates between ‘90s warehouse rave tunes and high energy bleeps and bloops. Jordan Nocturne similarly feeds the crowd, speeding up his brand of synth-pop hooks and trippy chuggers into fist-pumping house riffs, railing off banger after banger, including his Nocturne edit of ‘Keep On Pumping’. Space Dimension Controller’s much-anticipated return to AVA has mates hugging each other as the sky dims, embarking on a set full of warmth and revelation, Cologne Summer's 'Sunshower' provides a heady injection of trance while a late in the game drop of Prince’s ‘I Would Die 4 U’ gets everyone moving.

The recognition and admiration of local tastemakers is never more evident than as you witness the audience curl around the Boiler Room stream for Night Institute’s Timmy Stewart b2b with JMX. A classic DJ set, with long winding interludes and subtle tempo changes that, despite not knowing what was coming next, everyone seemed to move in complete understanding, particularly in the effervescent rolling out of Balearic throbber ‘Your Gonna Break My Heart’ by 3P1C-H1D3R. 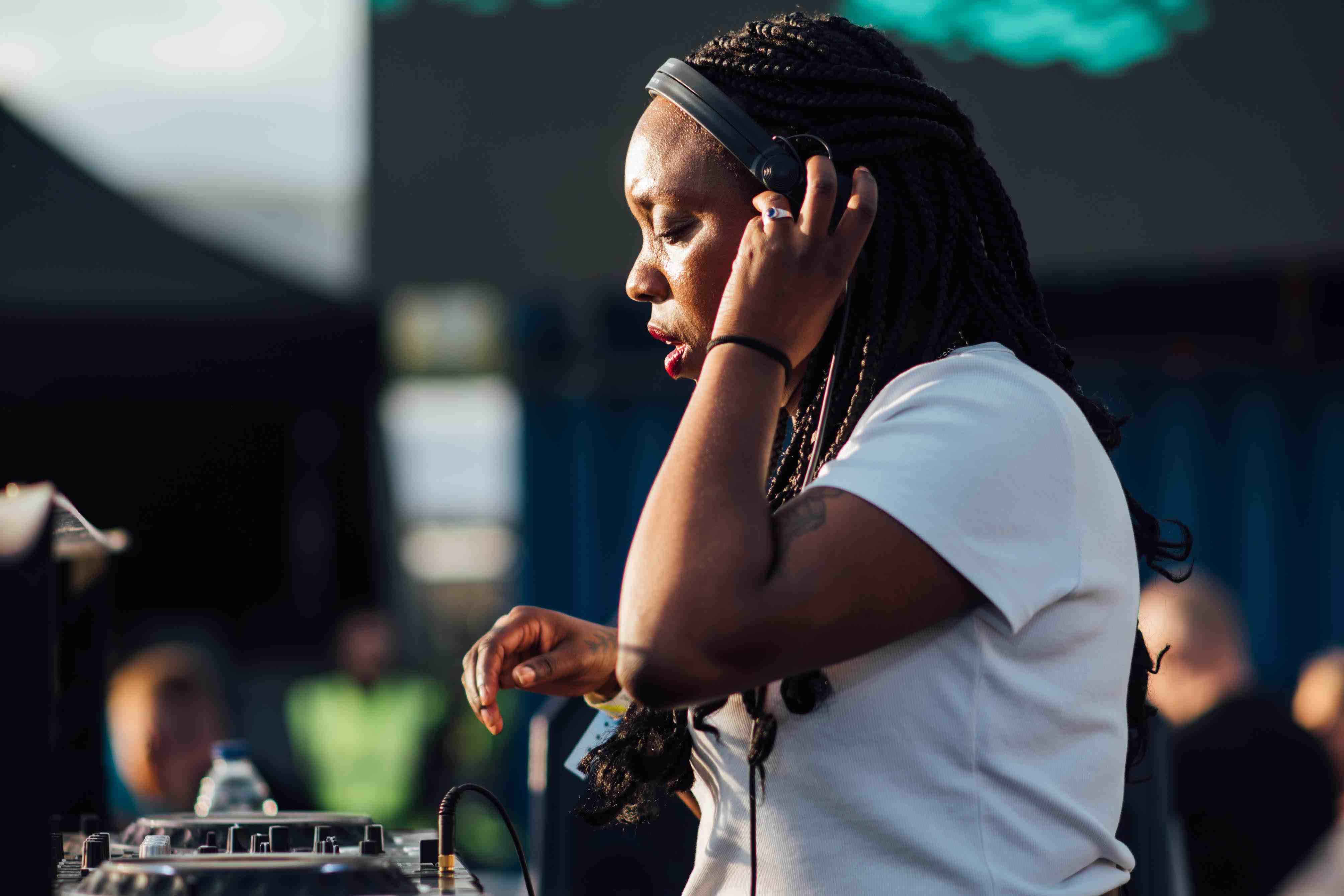 A highlight of the Boucher Road festival is its jam-packed Boiler Room offering, and an advantage of the festival's new outdoor setting was that the limited capacity for the streams was now gone — with space around ‘The Surround’ for punters to pack in and let loose. So much so that it ends up being the most consistently busy stage over the two-day event. German techno heartthrobs FJAAK load up the bass for their late afternoon stream, setting gun fingers off to Tommy Holohan’s ‘Subaru Impreza’ with a cheeky courtesy drop of ‘Theme From Q’ for good measure.

Read this next: Free The Night nightlife campaign launched in Northern Ireland

Carista brings a set that feels tailor-made for the Belfast crowd's love of atmosphere and slam, melding together Planetary Assault Systems ‘Say It Loud’ and `Morphing Into Brighter’ from Anz. On day two Swoose provides the waft, comforting hungover heads with a full bag of party records: ‘Intertial Force’ from Stef Mendesidis, ‘Manifestation’ by Robert Babicz and even a shattering mix of Laurent Garnier’s ‘Crispy Bacon’ that has the DJ swinging the record sleeve in the air as even the festival security guards found themselves in the dance.

Optimo set everyone off singing so loud there’s guaranteed to be some croaky voices in the morning, with Robin S ‘Show Me Love’, ABBA ‘Lay All Your Love On Me’, and mixing the Upsetters original ‘Chase the Devil’ with the sampling ‘Out of Space’ by the Prodigy. Sally C and Crosby mix it up with a feverish blend of acid, hardcore, jungle and techno, throwing in some of their productions alongside exemplar vintage rave records.

But one of the best sets of the two days comes not from the main three stages but at a small “chill out stage” at the side of the festival called The Baltic from Dublin-based DJ collective Eve — who treat those who fancied a break from the big-stage action to an array of broken down Ibiza classics, 90s house sing-a-longs and a particularly naughty 909 edit of Gorillaz ‘Dare’ that I haven’t been able to stop thinking about. 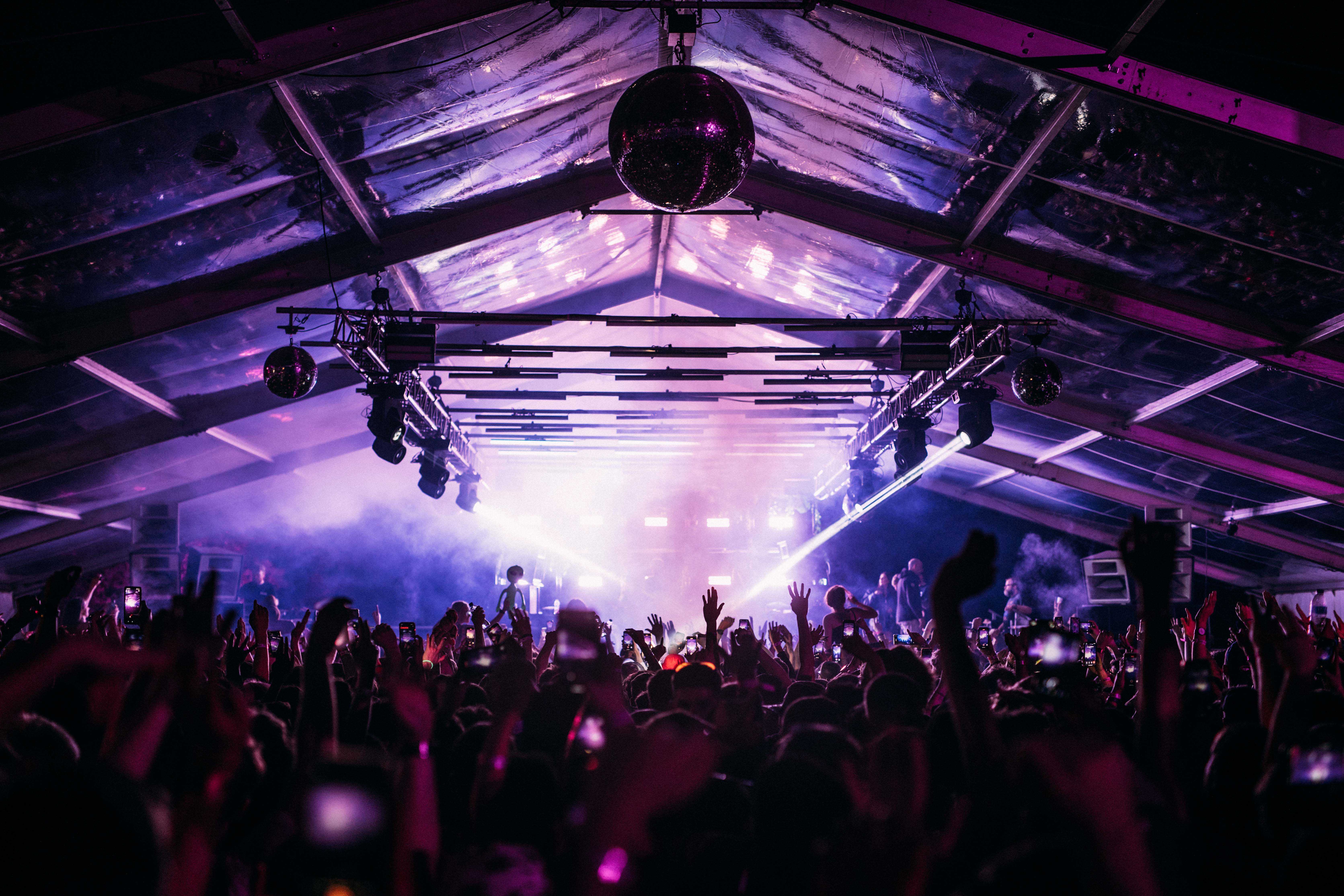 Though we’re in Belfast, and nothing at this festival matches up to how incredible the crowd are — it’s impossible to keep your eyes peeled on what’s happening on-stage when you have such an eclectic, colourful and joyous group of people surrounding you at all times. Their elation is palpable. It's so clear everyone is eager to get back into it. There's a feeling of missed time, of excitement, of just really wanting to have some good craic — but there’s no trepidation, they seem to always keenly follow the performers lead, sliding in with cheers and raised hands at just the right moment.

And it's a real shame because it's so difficult to escape the very obvious limitations on AVA from the get-go. At the final hour, the festival was forced to cancel its Friday and Saturday after-parties due to the ever-changing and unclear rules around nightlife and COVID, instead offering a sit-down party on Sunday evening, away from the festival site. Though there is a scheduled shuttle bus that attendees can buy tickets for at the festival, taxi coverage is minimal, even within Belfast city centre, meaning there are throngs of tired bodies attempting to get hold of lifts out of the city into the evening. The festival site itself of course is very different to previous years, but it doesn't seem to bring the mood down or take away from AVA being at its heart, a celebration of Irish music and culture. But the fact that the city seems to completely close at 11:PM, that everything becomes so difficult for attendees and organisers alike as time rolls on really does seem to take its toll.

Read this next: Sally C on AVA Festival: "It shows Belfast is a progressive city with a sense of unity"

AVA is a breath of fresh air, as always, it gives you back a bit of that zest and thrill that only a celebration within a close-knit community coming together can bring. It's exhilarating to be around, and it's clear why the festival has a loyal crowd that is willing to return year after year. The crowds at AVA are what make it, their openness allows artists to experiment and push themselves into unknown territory. For people with such warmth, who are so freely honest with their enjoyment it feels like a disservice to them that they can’t have the festival they so clearly deserve, one without harsh limits, that can flourish beyond its allotted 10 hours and to empower everyone to keep on dancing.

AVA Festival has already launched its 2022 early bird tickets, for more information head to their website.