“Get down!” says Hector as we drive through the streets of his home town of Guadalajara, “lock the windows!” But peeking out, the streets seem calm. Very calm. Trees overhang the main roads, and the smaller streets are lined with blocky buildings painted in pastel colours. Vibrant street art covers many of the frontages, and old men sit on pavements watching life roll by. Then we realise Hector is laughing. This is not an episode of Narcos. Guadalajara is Mexico’s second largest city, arguably the country’s cultural centre and the place where 37-year-old Hector grew up. And despite a career that sees him playing everywhere from Club Der Visionaere to CRSSD in San Diego and Hï Ibiza this summer alone, Guadalajara’s Bar Americas is his spiritual home as a DJ.

A bulky 6’ tall, hair slicked back with precision, tattoos (including a portrait of his wife Michelle) crawling up his arms and neck to meet his trim goatee, Hector is an intimidating figure – between his frequent smiles, that is. It can be difficult, he tells us, getting through border control at US airports. “Just look at me,” he says, laughing. Our initial thought on his all-black attire (printed tee, combat tracksuit trousers and hi-top Vans) is that he’s taking the techno DJ look to extremes in this 30 degree heat – but apparently it’s accidental. “I opened my suitcase this morning and realised I’d left all of my light-coloured clothes behind,” he tells us, with a trademark grin. 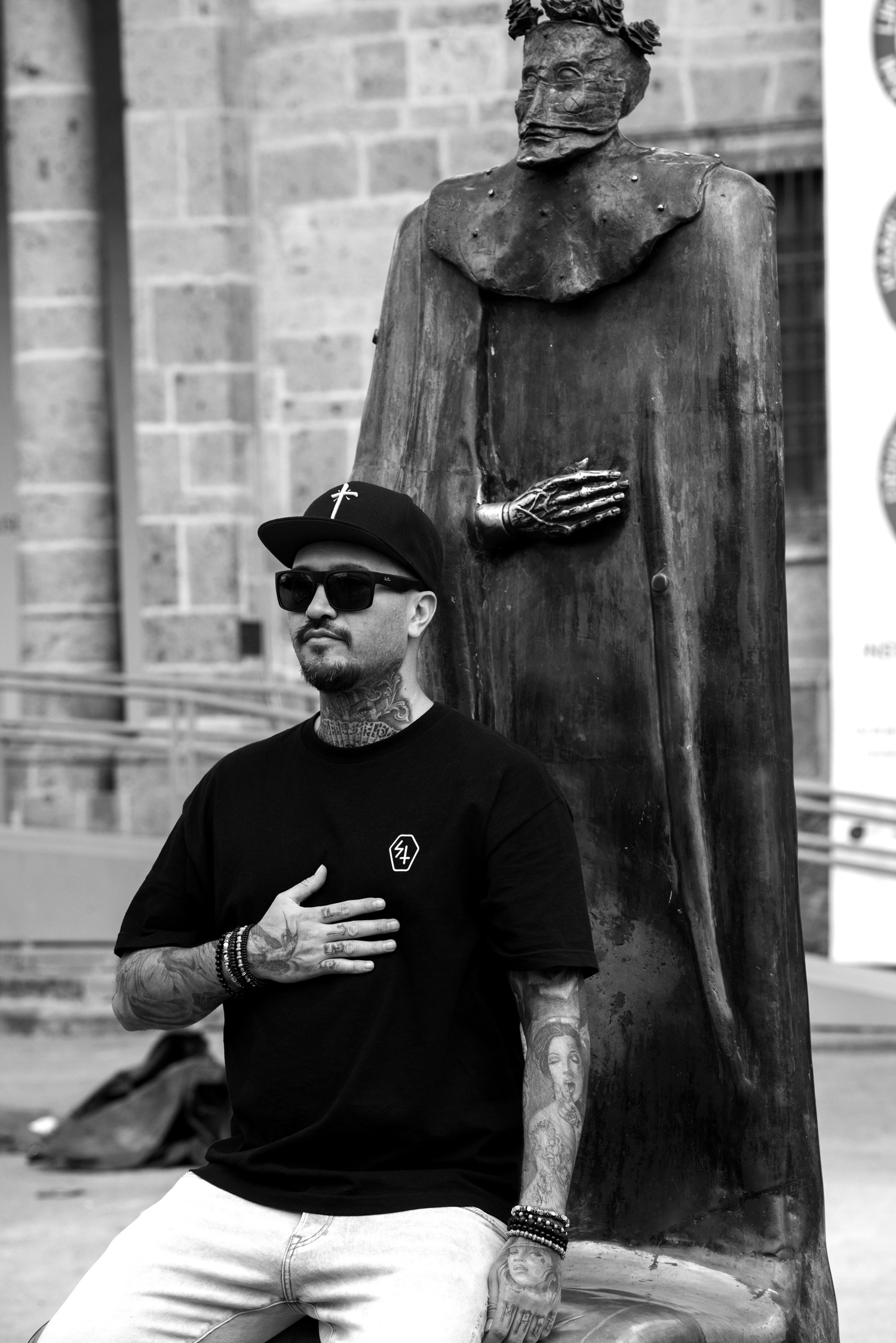 Hector loves his city. Rolling through the narrow aisles of Guadalajara’s indoor market he’s like a tourist in his own town. A Mexican wrestling mask is his first purchase, and he browses every other stall, toying with the idea of buying cowboy boots and a two-piece dress-up outfit for his daughter. “I just can’t stop buying her things when I’m back here,” he says. We ask about the slightly ragged people selling sweets and such to drivers stuck in traffic and he directs the blame straight at the government. “These people come from Central America, hoping to ride a train called ‘The Beast’ to the States,” he says, pointing at the railway line beneath the road. “It’s some real Mad Max shit, but the government does nothing about it.” He’s able to snap out of serious mode, though, soon pointing out a lamp post he crashed into in a brand-new Volkswagen Golf GTI in his younger, wilder days. Though Hector lives in Barcelona now with his wife and 18-month-old daughter, he’s still seen as an ‘influencer’ here. Recently he worked with photographer (and self confessed Hector super-fan) Hugo Martinez on a whisky campaign featured on billboards around the city. When finding one with his face on it proves tricky, he pretends an entitled whine: ‘Where’s my billboards, man?’

Along with his sister, Hector was brought up by his mother and grandmother, and spent his youth playing football for Club Atlas, almost making it to the first team until a knee injury ended his career. Around that time he met some English students living in Guadalajara who introduced him to electronic music via Fabric compilations by the likes of Craig Richards, Terry Francis and Slam. At 18, having finished school and unable to play football any more, he decided to move to London. It was supposed to be just for a few months, but clubs like Fabric, Ministry Of Sound and The End held him like a magnet. “Every time I got paid from my job as a bartender or waiter I’d spend it on vinyl I’d heard in the clubs. I didn’t even have a turntable at the time!” 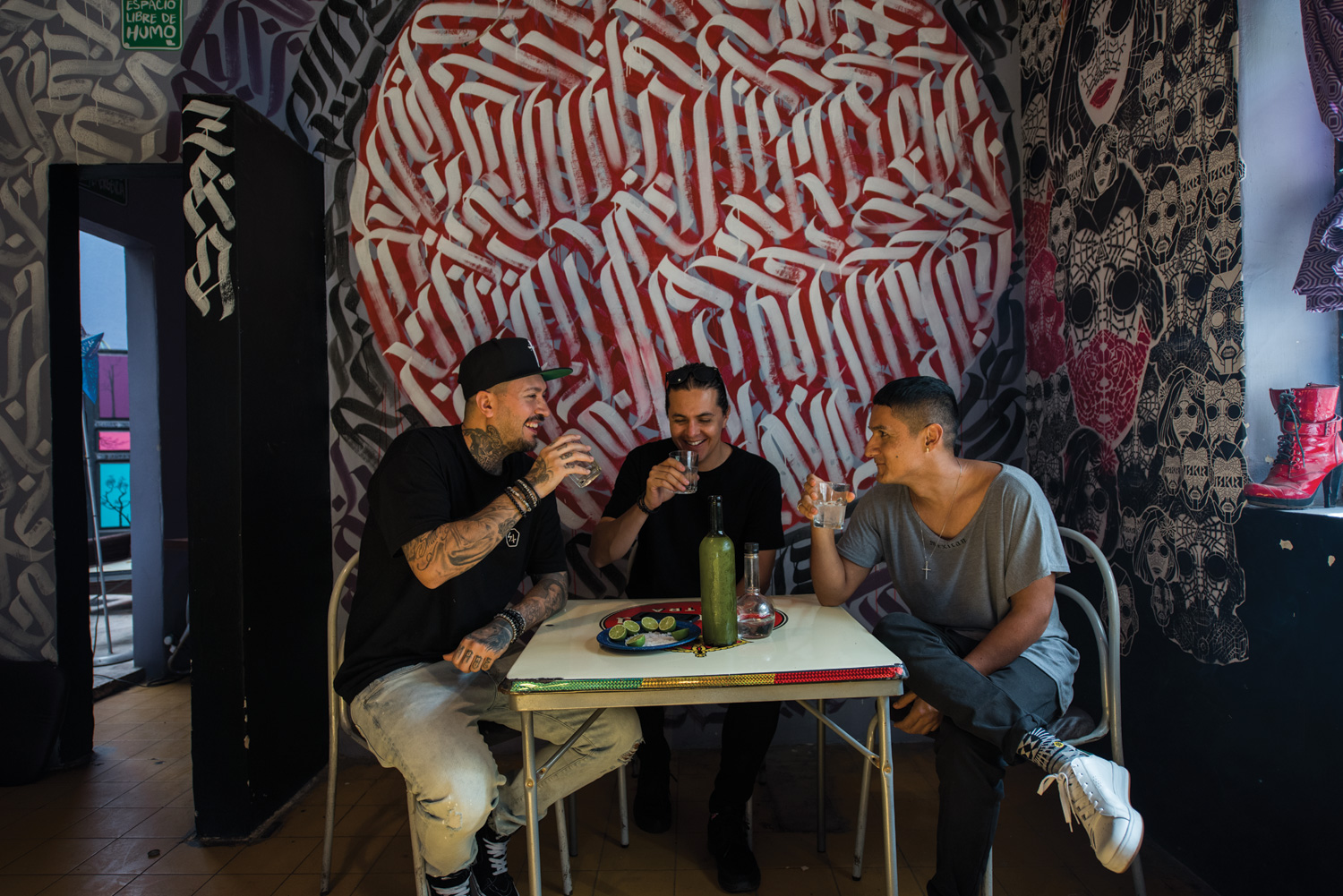 Eventually he rectified that, taught himself to mix, and in 2001 was invited to Ibiza by someone he met at Ministry, where he started flyering for Privilege. “That time was surreal. I was never shy – I’d always ask people like The Chemical Brothers, Erick Morillo or Deep Dish questions. Some would give me their vinyl to add to my collection.” At last he earned himself a chance to play in Privilege’s main room, but when his 600-strong collection was stolen from his villa he thought that his dream of becoming a DJ was over. It actually turned out to be a blessing in disguise.

“That day I felt seriously empty,” he says. “I had the chance to play in Privilege’s main room but all the records I’d bought were stolen, gone. Everything.”

Back in London, Hector gave Simon Rigg at the much-loved record store Phonica his list of stolen records, and managed to replace about 60 per cent of his collection. Artists such as Steve Bug and M.A.N.D.Y. heard about the theft and gifted him with releases on their labels Poker Flat and Get Physical. Impressed by Hector’s knowledge of music, Rigg even offered him a part-time job working behind the counter alongside Heidi, and he turned full-time once the Canadian DJ moved on, serving DJs like Richie Hawtin, Ricardo Villalobos and François K. “It changed my life completely,” he says. “You sell the DJs records, see them play them in Fabric and they give you a look, like ‘That’s amazing’. You’re like, ‘Yeah!’. I’m so grateful for that job;, I think it was the biggest thing in my career.”

Around that time he was playing parties like Kubicle and Circoloco in London, and in 2009 he released tip-toeing tech-house cut ‘Got Fringe?’ on Anja Schneider’s Mobilee. Then came the showcases with Loco Dice’s Desolat label and the Ibiza parties – Marco Carola’s Music On and Richie Hawtin’s ENTER. – among them. Other releases have come on Phonica, Tsuba Records and Saved, and in 2016 he released the ‘Jacuzzi Killer’ EP on his label Vatos Locos, bringing together trippy tech sleaze, demented vocal chops and a remix from Underground Resistance member DJ Rolando.

Hector’s relationship with Guadalajara venue Bar Americas goes back to his grandmother’s death in 2003, when he left Europe to return home to be with his mother and sister. “When she died I had to find something to do. I left Ibiza and brought all my records, my decks and mixer back to Guadalajara with me,” he says. He saw the potential of the bar and asked the manager, Ramon, if he could hook his gear up to the soundsystem. “That started to create a little hype about
Bar Americas,” he proudly asserts. “All the artists from Guadalajara, basically the trendy people, started to go. It became the place to be.”

A Modeselektor show was a “game-changer”, the club having to knock down a wall to make the space bigger and install a new soundsystem; Nina Kraviz and Jamie Jones are others who have played. It gets so many world-class artists, and charges nothing for entry, that “no other clubs could really stand up to it” – which is why other venues throughout the city have been short-lived. Bar Americas has even worked with the government for open-air parties, shutting roads in 2012 to allow Richie Hawtin to knock out some techno. “A DJ playing in the middle of the street? People had never seen that before,” says Hector. “The government was interested, but the next government could be like, ‘Fuck you, we don’t like this shit’, and it won’t happen again.” 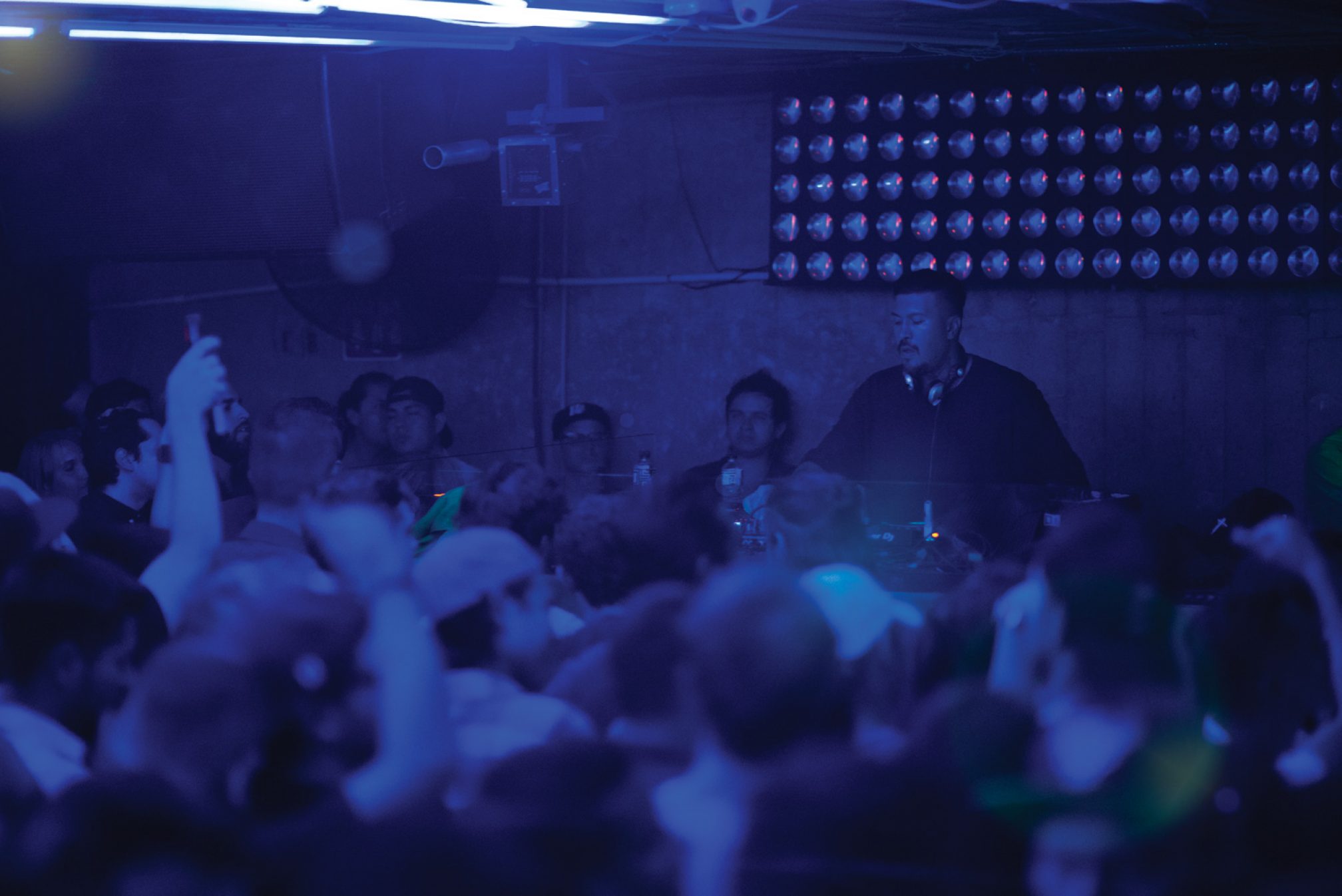 Bar Americas moved venues two years ago, and we drop by the old site, a space only big enough to fit 100 people, for a look. Situated in a dusty alleyway beneath a gigantic grey tower, it seems totally forgotten now. Orange wrapping and a wire grid covers the doorway; opposite is a room full of rubbish and a derelict ice cream parlour with a homeless man asleep inside. It’s in stark contrast to the glistening, new-build skyscrapers and car dealerships across the road.

From the outside, the new club – tonight hosting the launch of Hector’s new, techno-focused label VLack – is thankfully far more lively. Groups of revellers loiter and smoke on the street, heads turning and fingers pointing as Guadalajara’s most famous DJ pulls up. We make our way through a corridor ablaze with blinding red LED lights, but once in the main room the vibe is more homely warehouse-meets-pub function room. Chunky concrete pillars accompany wood-panelled walls and dimly lit wall lamps, with smartly dressed locals mingling as the warm-up DJ plays DJ Seinfeld’s lo-fi house cut ‘Time Spent Away From U’.

Hector’s entrance into the booth sparks the dancefloor into life. The chat stops and people make their way towards the booth, a group of six or so even barging people out of the way to get to the very front. Hector lives up to his earlier declaration that he’d be playing harder than his usual bumping tech-house tonight, opting for Marcel Dettmann’s ‘Push’ and the rev-heavy ‘Schlang Bang’ by Barker & Baumecker. Ramon Gonzalez, the owner of Bar Americas, stands proudly by the door to the DJ booth, deciding who does and doesn’t enter Hector’s place of work. 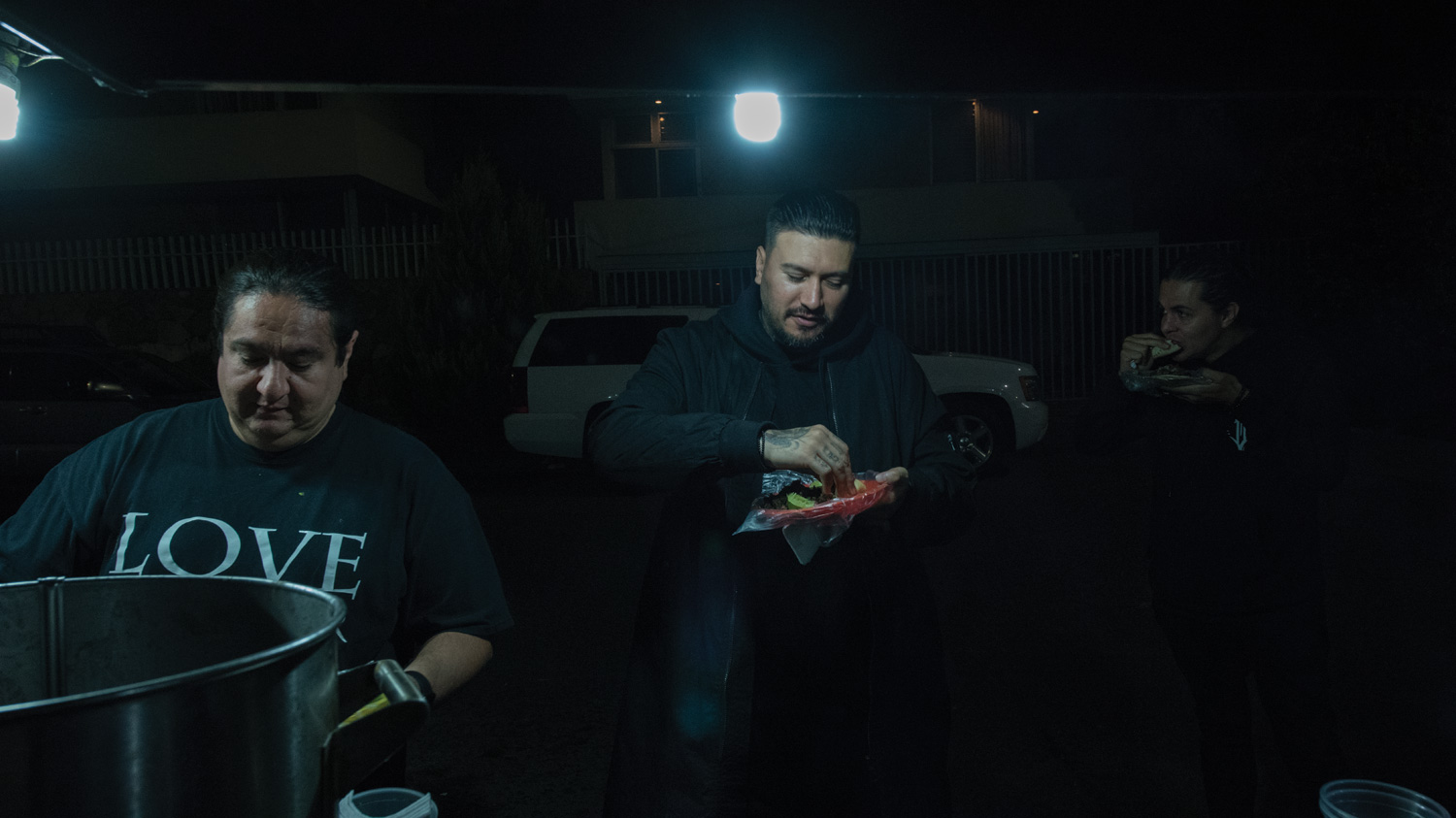 The pair’s relationship hasn’t always been easy. Before moving back to Europe Hector held his leaving party at the original Bar Americas. Unhappy at some “random guys” playing and not being allowed to himself, Hector told Ramon he’d unplug and remove the turntables and mixer, a threat Ramon didn’t think he’d carry out. He did – leaving a bar full of people completely baffled and without music. The pair didn’t speak for nearly two years after the incident, but you’d never think it now. Pre-gig, Ramon keeps himself entertained by applying a love heart filter – complete with romantic sound effects – around Hector’s face on Instagram Stories and proudly showing it around.

Tonight, Hector’s in the zone as he navigates three CDJs. The crowd throw their arms up towards the criss-cross LED ceiling lighting and cheer at every thudding drop. The fizzing build-ups of Dosem’s ‘Inductions’ get the most rapturous reactions of the night before he finishes up by handing over to Nicole Moudaber with the haunting chimes of ‘Stella’ by Thomas Schumacher.

His work done, Hector ambles out of the booth and high-fives his Vatos Locos crew. His brief return to Guadalajara is over, but you know that whenever he’s in town his throne in Bar Americas will be waiting – as will the city’s clubbers for their home town hero.