Kelela: "The 'making something out of thin air' feeling is so delicious" - Cover stars - Mixmag
Home Latest News Menu

Kelela Mizanekristos emerged at the start of the decade as an enigmatic songbird harnessing grime beats and metallic club constructions crafted by Night Slugs and Fade To Mind beat-makers and mutating them into music that felt soulful, tender and sexy. Now on Warp, she continues to craft a sonic message that exists between r’n’b, forward-facing club music and more experimental ventures, her label output evolving through edits, remix projects and visuals. Her references, lyrics and links between genres both established and emerging remain evergreen, too, fusing with an intentional take on what black, intersectional music sounds and feels like today. It’s a sonic stance evidenced on her breakthrough ‘Cut 4 Me’ mixtape (2013), ‘Hallucinogen’ EP (2015), debut album ‘Take Me Apart’ (2017) as well as her recent ‘Take Me A_Part, The Remixes’ album (2018). The remix project was curated and executive produced with friend and frequent collaborator Asma Maroof, aka Asmara, who also collaborated with her on the ‘AQUAPHORIA’ mix for Warp’s birthday, and who DJs and produces with Daniel Pineda as duo NGUZUNGUZU. 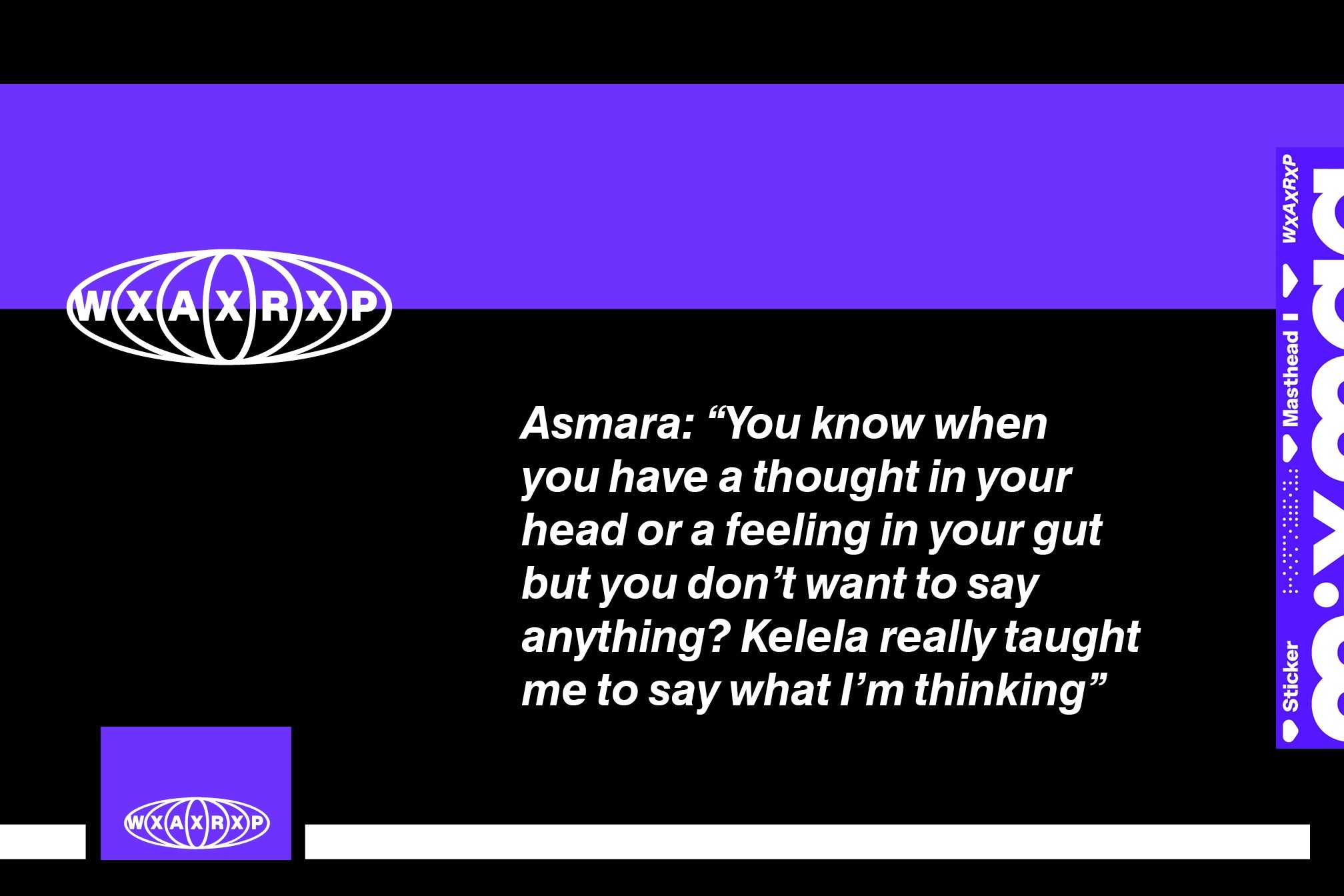 How did you two meet?

What did you bond over?

Kelela: We share this history that is so overlapping. We’re not just from the East Coast, we’re from suburban Maryland, outside of Washington DC. Those suburbs, between DC and Baltimore, are a musical intersection. [With Asmara and I] there’s something crazy about sharing perspective on what we want to make – what we’re looking towards in terms of the future – while also sharing so much history: Go-Go music [DC-specific funk offshoot], the radio stations we grew up listening to, even down to the denim we wore in high school. All of those things inform what we make today.

Asmara: Also, being from immigrant families and what that adds to the storyline. Like, we’re listening to Go-Go, Baltimore club, r’n’b, rap, rock, punk and emo, and then we’re also listening to Ethiopian music and Indian music at home. There’s an added element that influences the way we hear things, and the way that we relate to music, and
also each other.

Your ‘AQUAPHORIA’ mix for Warp’s 30th anniversary was very ambient. Is ambient something you’d like to experiment with more in the future?

Kelela: For sure. Asmara and I could approach almost anything, because the language we share is so wide-ranging and overlapping. What makes ‘AQUAPHORIA’ interesting is that we infused this sound that usually feels one way – I’m not going to catagorise that – and we were like, ‘Let’s make it feel this other way’. It feels so exciting because there’s always going to be another place and another thing to infuse into something else, because our tastes feel so broad and our choices very intentional. 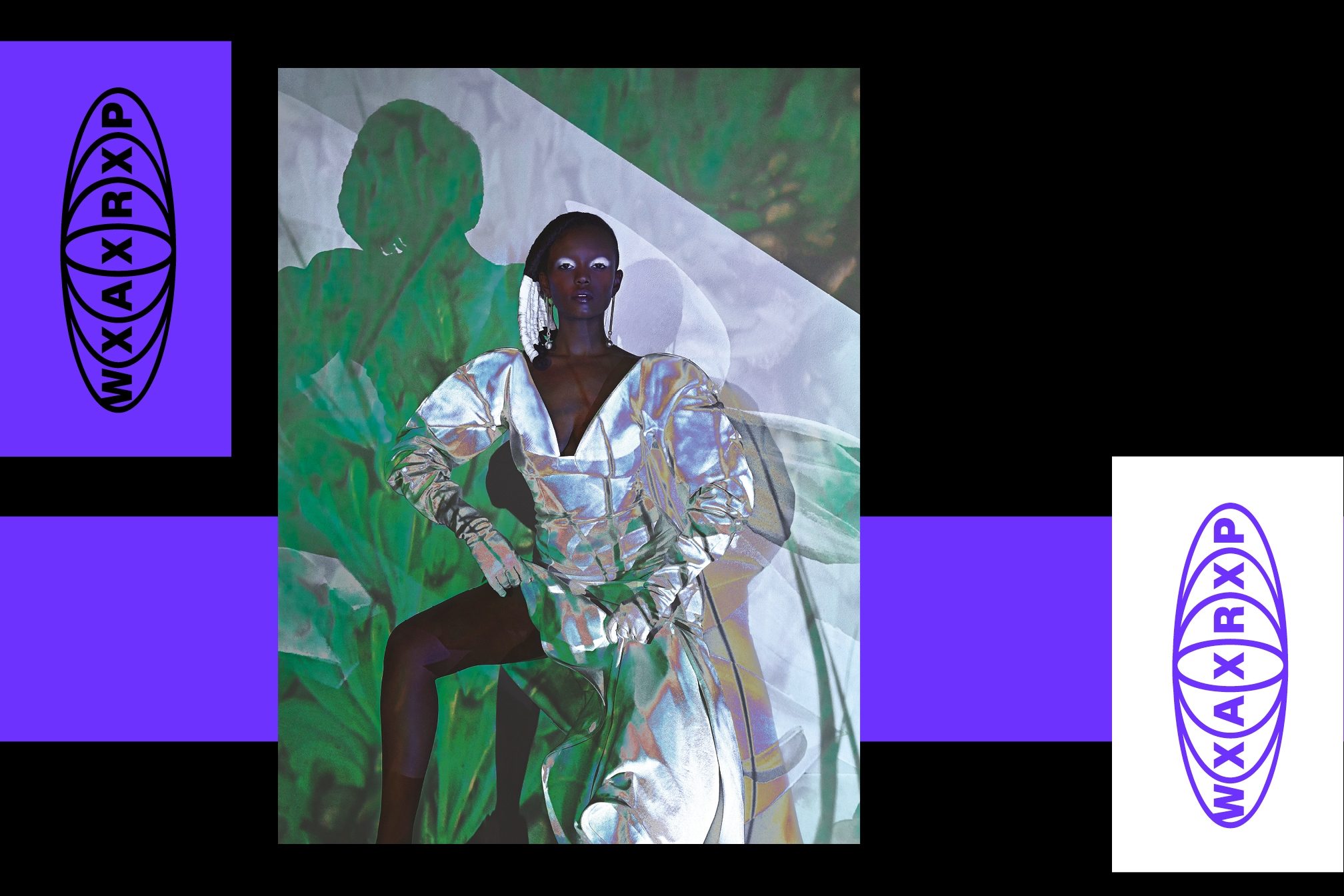 Kelela: It had the most to do with feeling like my agency as an artist was going to be respected and embraced as a number one priority. I had a choice between a very typical major-label model and working with Warp. For me, it was very clear that, even if I had all the resources and so on, I would feel sad if I didn’t have my agency in the future. That’s why I went with Warp. I know I made the right decision, because I feel like who I am as an artist is definitely being revealed over time, and it feels true to who I actually am. I feel that within the scope of what Warp does,
and what they haven’t even done yet, I can do whatever the fuck I want. That’s the key for me.

When do you feel at your most powerful?

Asmara: After I’ve gone through the wringer a little bit. Like, I’ve gone through it, I’m persevering, I’m actually able to get somewhere through my thoughts and my energy and I feel like I don’t need nobody! When there’s a breakthrough, that’s when I feel powerful. Because it’s not so much about you, but just strength in itself.

Kelela: When you initially asked the question I was like, ‘Man, when we’re in the studio’. When I’m making a mix or when I write a song or just when I’ve made something. After I’ve created, there’s a feeling of ‘I‘m that bitch’. On the one hand it’s what Asmara is saying about what we feel after a difficult or challenging experience, but there are also these micro-moments of power. I do feel a lot of power around my ability to create or breakthrough to make something new. The ‘making something out of thin air’ feeling is so delicious. It’s feeling that nobody can take this thing away from me.

Read this next: FlyLo discusses the importance of Warp

Asmara: I immediately thought of the studio, too, as well as the [mental] spiral.

Kelela: Both things coexisting. That’s another reason why we relate to each other; we’re both spiralling at the same time. My fans know that about me. They know that I’m this out-here, aspirational figure, but I think part of my aspirational appeal is that I’m also spiralling. It’s a little facet of the brand. It’s not just me being this stoic figure up there on stage. That’s not really in my messaging, and I challenge those notions through lyrics especially. 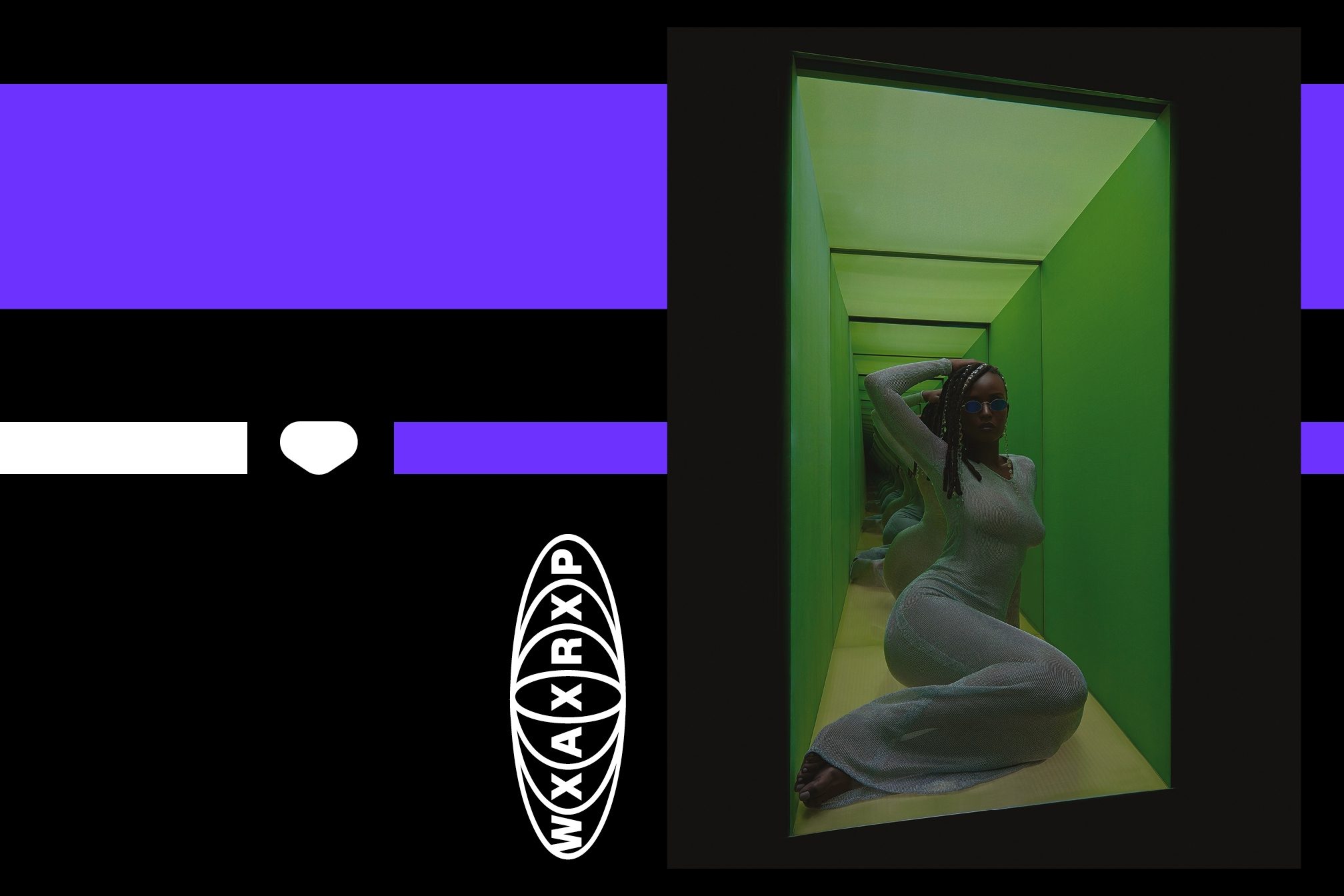 How did you become so comfortable talking about sex in your lyrics?

Kelela: I’ve always felt sexy, or at least felt some comfort in my body, and that’s something I’ve wanted to share. The fact that my music can make someone feel comfortable, feel sexy or make people get into their body – or someone else’s body – is really gratifying and fulfilling because I think it’s where a lot of us experience blockage. It also has to do with it being paired with tenderness. I think my vulnerability then sets up a context for real tenderness, and then that sets up a context for real sexiness. A sexiness that’s on another level than just banging. It’s something a lot of people who write music could do, but I feel like I’m one of the few who are intentionally choosing this angle of sexiness and committing to it. Even when it’s like, ‘I’m topping you’, which is eighty per cent of my songs [laughs], it‘s often a soft top. There are still moments of tenderness. It’s also about the intimate context the other songs create: being really vulnerable in my sadness on one song and bringing that vulnerability to a make-up-your-mind [finger-snaps] song. That’s something that I really want to imbue in the music, this sense of an intersectional reality, definitely across an album; but sometimes within the same song.

How important is your visual identity, art direction and overall aesthetic?

Kelela: It’s just as important [as the music]. Part of the way that I want to deliver my music is through visuals and other experiences. That’s something that I’m trying to get into on my next record: other ways of delivering music and my message. Visuals are very important and I want to find other ways to make them speak to my identity and brand as an artist. When I say ‘brand’, I mean what I’m attached to and how I want people to be affected by my work. I have been thinking about other ways for me to express myself that could lead people to get their lives in a way they never expect from singers who have platforms like me. So I’m excited to get into that more.

Asmara: When Kels is in the studio, she’s always thinking of visual ideas or what the video will look like. Or if she hears a sound that sounds very tickling – like the midrange of a sound is tickling – she’ll be like, ‘It’s like a drink’. She’ll have a visual reference for each sound. That’s a part of her process, even when she’s in the middle of writing. 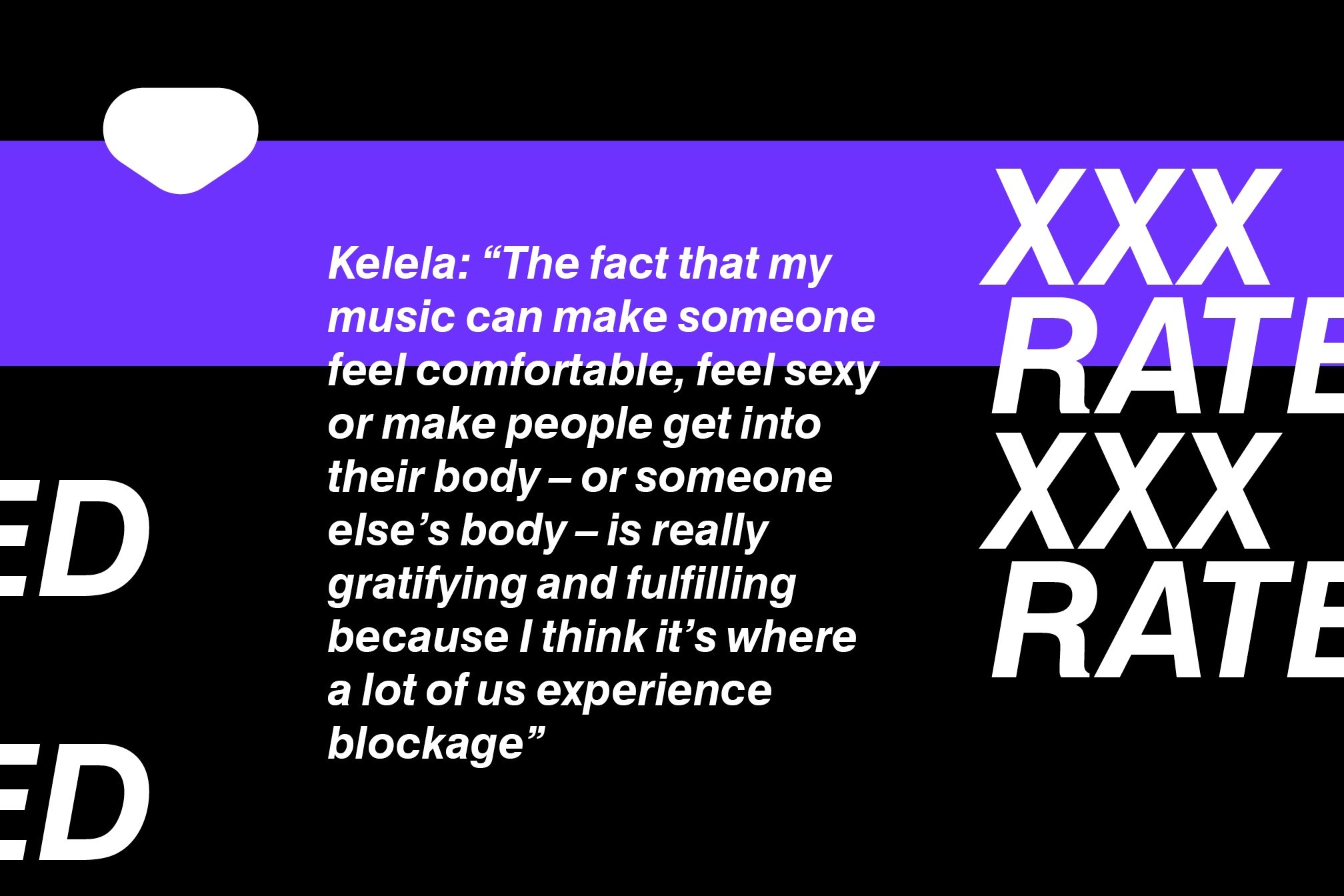 The biggest thing we’ve learned through your music is how powerful it is to be vulnerable, especially as women of colour. What have you learned from each other?

Kelela: This question’s already made me cry...

Asmara: Kels has really shown me how to feel more powerful. You know when you have a thought in your head or a feeling in your gut but you don’t want to say anything? Kelela really taught me to say what I’m thinking, and that really helped me to grow not just musically, but as an individual.

Read this next: A Yves Tumor photo story

Kelela: Asmara’s provided me with my first real example of one hundred per cent safety in music-making: an experience where I only feel challenged in healthy ways, as opposed to being challenged in ways that harm. As women of colour, we deal with a ‘you-don’t-know-what-you’re-doin (and-if-you-did-you-woulda-done-it-by-now)’ default setting. Also, Asmara is a really gentle person, so I’ve learned to listen and be more patient and learned how to create a safer space for someone else who may not be feeling so safe. There’s just a way that I feel validated by her in the moment that is very much not the norm, and immediately gets me closer to what I want to express. I think it creates another level of output when someone is holding space for you. It’s one of the biggest gifts anyone could give someone. It’s how we reach new heights. 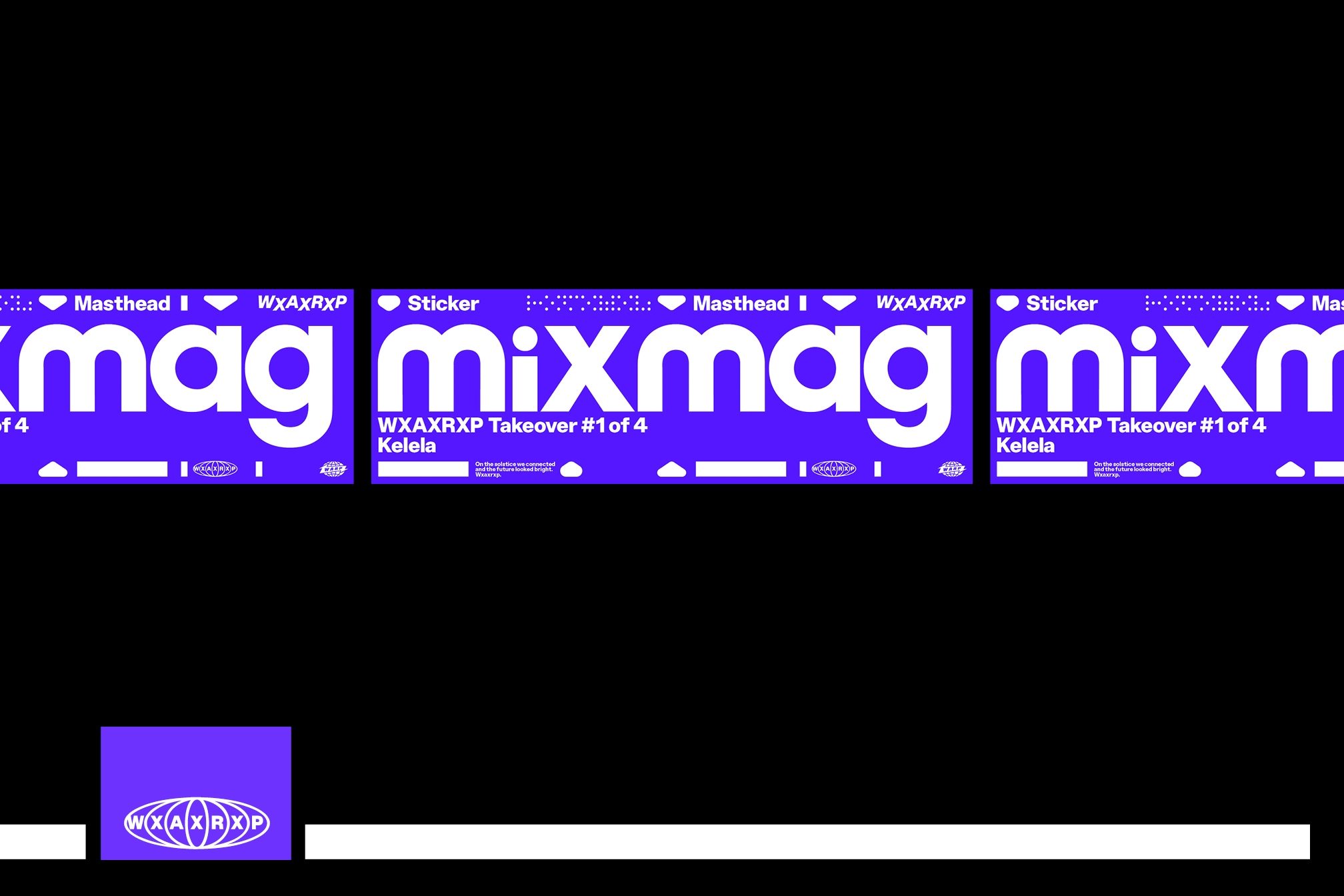