Everyone talks about your relationship with Erol Alkan. What is it like to be championed by someone you admire and a figure so highly regarded within dance music?

It's been a fantastic ride, it's been totally unexpected. It almost seems too fitting that one of the first DJs I latched on to, I've now just put out my first record on his label. In a way it makes a lot of sense because he has inspired me throughout the years and he was the one who encouraged me to make an album in the first place. He was the one who said, 'It's time for you to do something'. What's been so great about Erol's career is that he's been a lone ranger figure the entire time and he's always done things his own way and that's totally inspiring. For me to be on his label is a big thing and I feel really at home.

It’s wrong that people are talking about pre-recorded DJ sets and the sync button.

Now that the album is out, what's next other than touring? Will there be a live show?

I've definitely thought about it but at the moment there aren't any immediate plans for various reasons. One is that Im enjoying DJing more now than I ever have and I think it still has a lot to offer. I think it's wrong that people are talking about pre-recorded DJ sets and the sync button. The idea of spontaneity within DJing is so important. The idea that you play what you want and then see the immediate effect it has on the audience is why I love DJing and I don't want to lose it. I'll never say never, but when I do it live I want it to be on a big scale. In the same way I've really focused on the artwork for the record and the visual aspect, I would want it to be a totally immersive experience.

The reviews of the album from the majority of the press have been extremely positive. How does that feel off the back of your debut?

It's been mind-blowing. It's such a bizarre experience working on something for a long time for people to finally hear it and then be into it. What's been most encouraging is that different parts of the press have been into it. From guitar magazines to club publications like Mixmag. The thing I've been really happy about is so many different DJs have picked up on it and have been playing it. Legends like Richie Hawtin, Harvey or The Chemical Brothers down to new people in different genres. Maya Jane Coles has been playing it and so has Ben UFO. I never set out to do that. It's so encouraging that this thing I made in a freezing cold shipping container outside the Thames has made it out and people like it. It's amazing.

How did you feel before the album was released. Were you apprehensive about how it would be received or were you confident it would go down well? 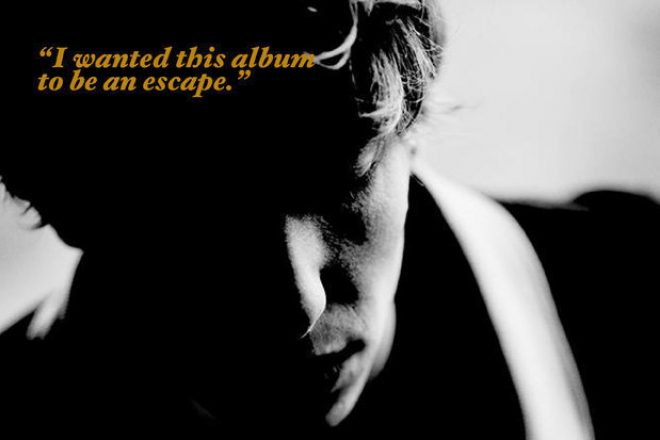 I felt confident that I'd made an album that sounded like me. I knew I'd made something that's a good representation of what I do as a DJ too. For me, I guess it's been very useful that I've been able to go and DJ every single weekend and so these tracks have been road tested a lot. I've taken demos out on the road, played them out and instantly seen the reaction and I've seen where things haven't worked and I've been able to change them. I did want the album to be rooted within clubland even if it is quite trippy because that's where I've been for the past few years.

You made a name for yourself playing at Fabric and you'll be back there in a few weeks. Does it feel different going back now you're an established producer or does it still excite you?

I still feel as excited walking into Fabric now as I did when I was a youngster. I think that place has a magical quality to it. My favourite thing about Fabric is that for a long time now it's always supported underground music on a big scale. It would have been so easy to sell out numerous times over, imagine how many people have wanted to play and they've said no and stuck to their guns.

I still feel as excited walking into Fabric now as I did when I was a youngster.

If you curate a festival stage with artists from the last 10 or so years who would you pick and why? Name your top six.

I would immediately pick Erol and Andrew Weatherall to DJ because they've been so important in everything I've done. It would be cool to see an Aphex Twin live set from a few eras ago. I would put Caribou's live show on, I think Dan Snaith is a hero in many ways. He's another lone ranger figure who has done things his own way and both his Caribou and Daphni projects are really inspiring. I would put all three Innervisions guys on the bill, Dixon, Âme and Marcus Worgull because I think what they're doing is a really interesting brand of German techno. It has so much warmth to it and it has so much love that you can feel within it. It's romantic techno in the best possible sense of that term. I'd also pick Matt Walsh because I think his Clouded Vision label is one of the most exciting labels at the moment, especially in the UK. I think it really has potential to become the Kompakt of London. I really believe that. He's one of the best A&R men in London without even knowing it and a fantastic producer.

Where is your favourite place to party when you're not working and why?

Generally on my nights off I don't go to nightclubs because I like to do something different. There's two clubs in particular that are really special places: Trouw in Amsterdam and Lux in Lisbon. They're the very best in Europe. They have a real inclusive atmosphere in there and that's incredibly important for a club to have. These are clubs that are serious, the DJs are serious and so are the clubbers, but you really feel like a part of it. In Trouw people can dance around the DJ booth and go up to the back of the stage. It feels like the best house party you've ever been to.