You know you’re on to something when a world cycling champion gets down on their knees and calls you a hero. But legendary nightclub Fuse in Brussels seems to spark this kind of enthusiasm in people, regardless of vocation. Arnaud Roobaert first discovered it when he was 17 and, from the very first night, knew he wanted to spend his weekends there. Twelve years on he still does, looking after the many and varied artists who travel across the globe to play at Belgium’s most respected nightclub. Arnaud is 28, fair-haired, softly spoken and struggles to pick his favourite moment at his favourite nightclub. But after some deliberation. he decides on this:

“I played here on New Year 2012, a peak-time slot in the main room. All of a sudden I felt a tap on my shoulder in the booth. It was Tom Boonen, who is a Belgian world cycling champion. Apparently he loves techno. He went down on both knees and said ‘Thank you, man! you’re my hero!’ I took off my headphones and was like, ‘Tom Boonen?’” Boonen had just won the Paris-Roubaix cycling race. “Everyone in the country knew who he was, except for the people who go to Fuse. That’s probably why he likes to party here!” 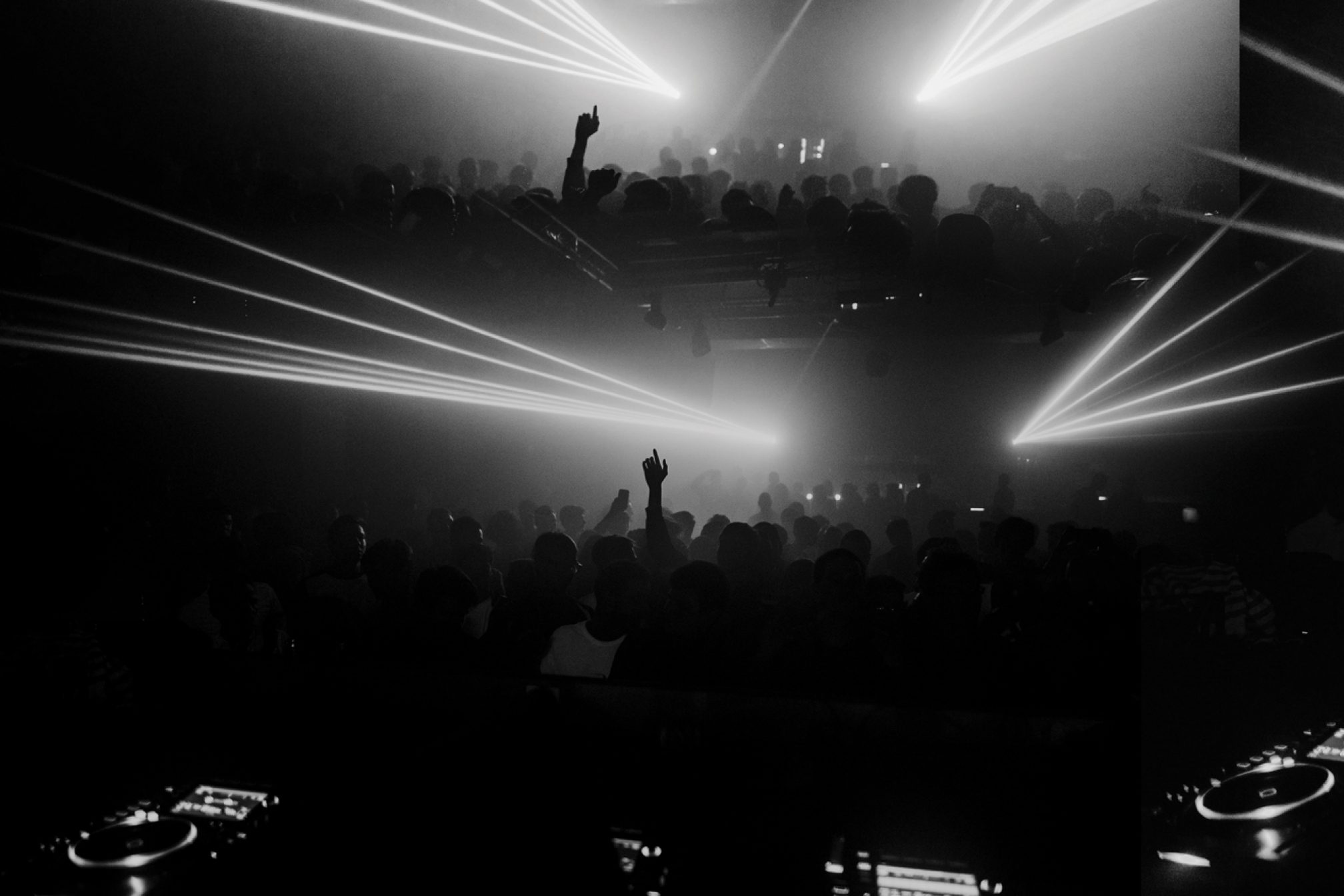 Fuse is one of Belgium’s longest-running and most prestigious electronic music institutions. Since 1994 the venue, a former 1920s cinema, has hosted unparalleled line-ups and spearheaded the European techno scene from its modest position amongst the labyrinthine streets of Brussels. A small wall of fame in one of the back rooms boasts a litany of artists who performed there in the 1990s, including Carl Craig, Richie Hawtin, Aphex Twin, Daft Punk and even Björk, in 1997.

“When Fuse first opened the founders booked huge names, but people just didn’t care,” Arnaud explains. “Belgium wasn’t ready for a techno club.” The two founders were weeks away from shutting the club when, out of nowhere, it started filling up – and it hasn’t emptied since.

There’s a sense of theatre as you enter the venue through the old cinema lobby, down a double staircase and into the huge main room. A 360-degree neon-lit bar sits in the centre and three short steps lead to a colossal dancefloor where tonight, Netherlands-based label EPM has taken over.

Here label co-founder Oliver Way is heating up proceedings ahead of Detroit techno godfather Robert Hood. Way wastes neither time nor BPMs, barely giving dancers time to breathe between volcanic, trancey build-ups and slamming techno drops. Belgian ravers face the spot-lit DJ booth, doused in plumes of smoke, faces lit up by the red, blue and green lights lasering across the room. Groups of white-shirted lads dance wildly, sometimes so enthused by Way’s selection they turn to face their mates, both arms in the air, bellowing their approval to the cosmos. 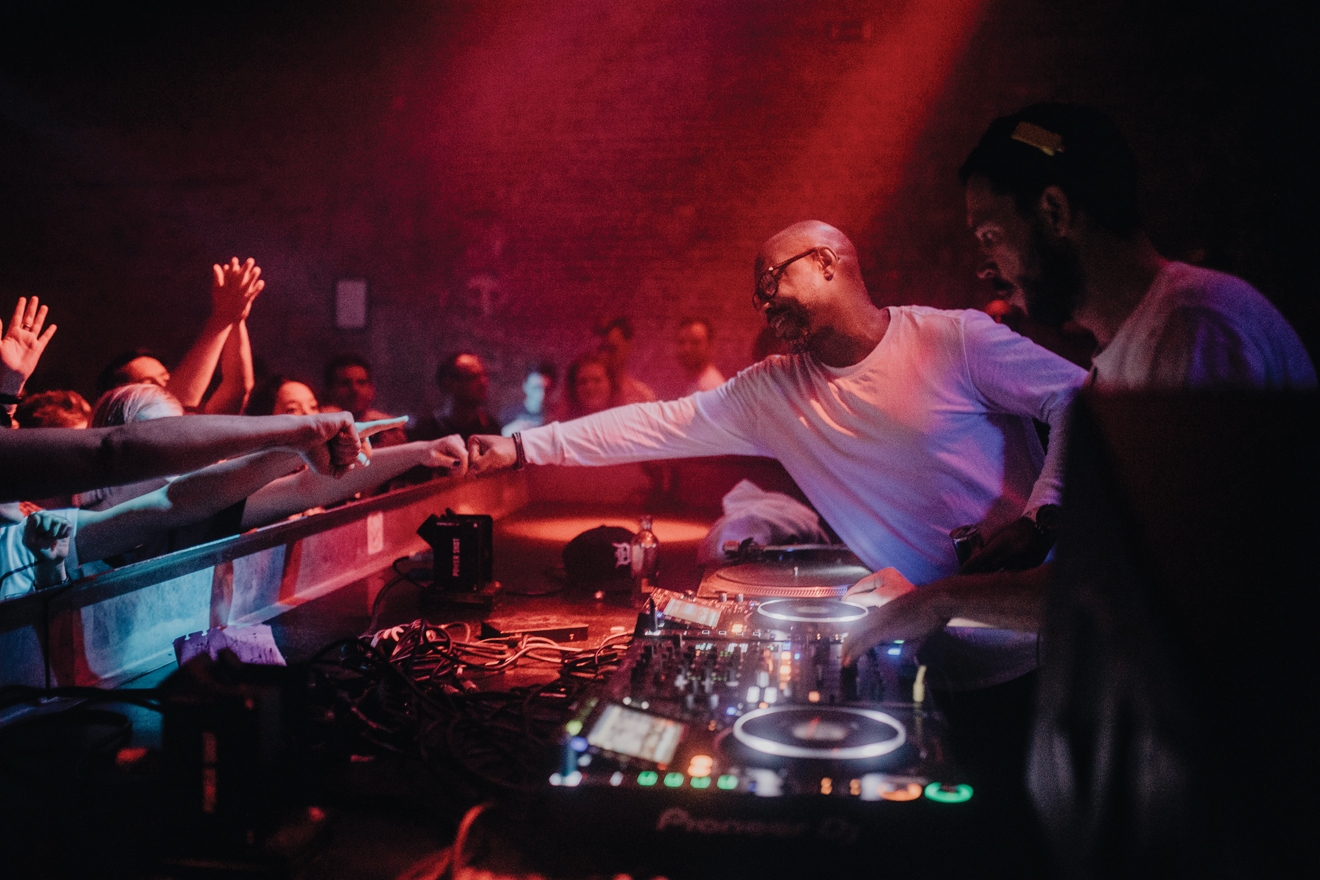 Robert Hood steps up next, to deliver a hold-on-to-your-hats powerhouse of a set: robust, dynamic and at times surprising, mixing gospel tones with trance tracks. The man who created the blueprint for minimal techno in 1994 has risen to dominate the landscape alongside Fuse, making tonight’s pairing a match made in techno heaven.

Meanwhile, upstairs in the club’s second room, Futurepast celebrate three years of parties in an atmosphere so different it could almost be a separate venue. If Fuse were still a cinema, then downstairs would be screening Mad Max: Fury Road and upstairs a feature film by Tarantino.

The Futurepast crowd pack around the DJ booth, soaking up the ethereal tech-house sounds of local Belgian artist Jakob. Here everyone seems to know each other, and they listen and dance attentively, visibly appreciative of Jakob’s artful mixing and intelligent selection. Steps are set like bleachers against the wall and clusters of friends in Doc Martens and black T-shirts intermittently yell their approval in Dutch. If downstairs is the global stage, upstairs we have the local.

Davy Vandegaer has hosted his Futurepast party series at Fuse for three years and feels the venue has been instrumental in shaping not only his musical career but the entire Belgian electronic music scene. “When it opened, Fuse was out of this world for most people,” Davy says. “They’d never heard techno – going to this kind of club was a total experience.”

Through the years Fuse has seen any number of trends come and go but, as managing director Olivier Ramoudt says, “We have always had a very solid formula and we never deviate from our programming. When trance and drum ’n’ bass were hot, we didn’t join in that trip.” It isn’t all techno, of course – last night Peggy Gou hosted another sold-out event. 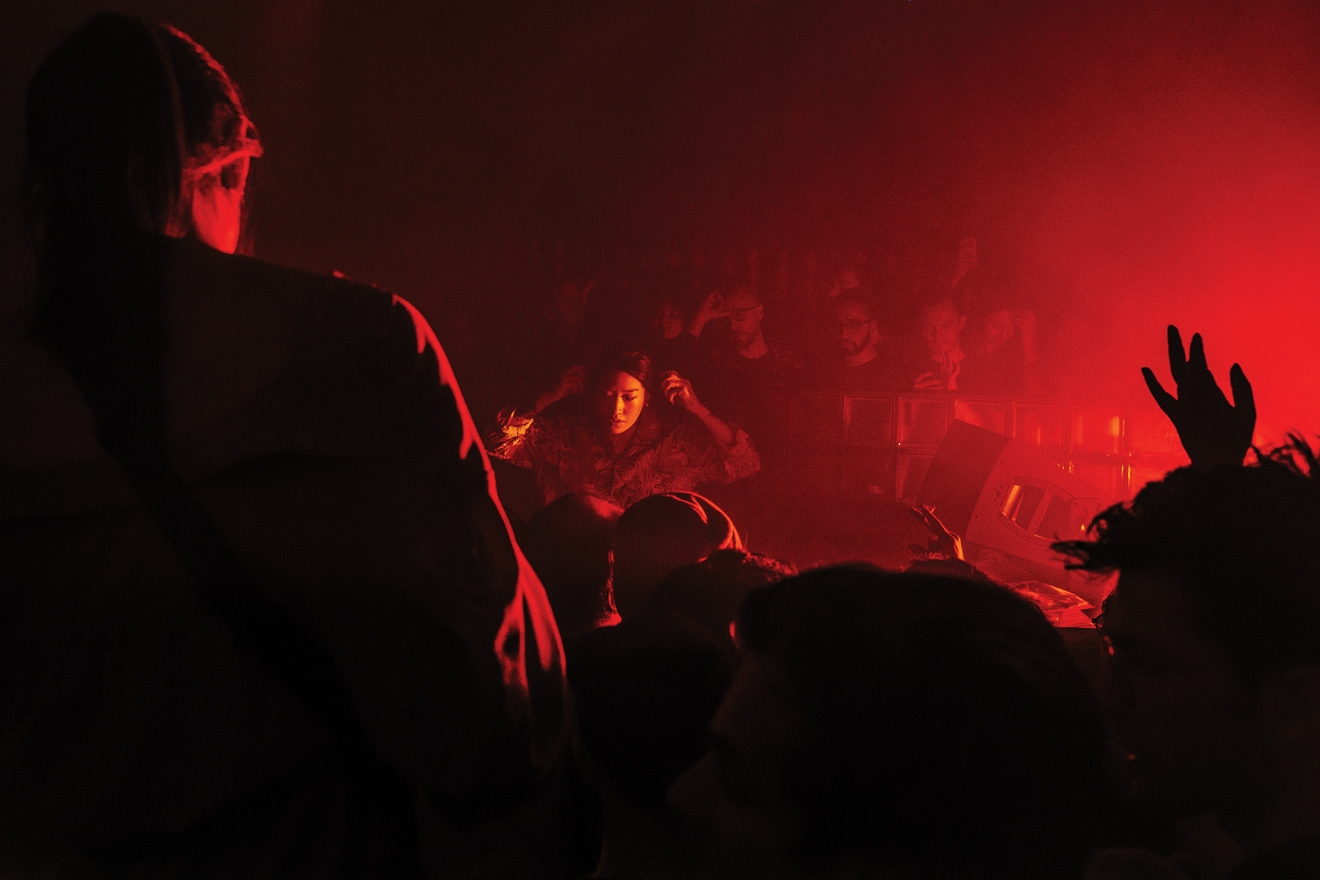 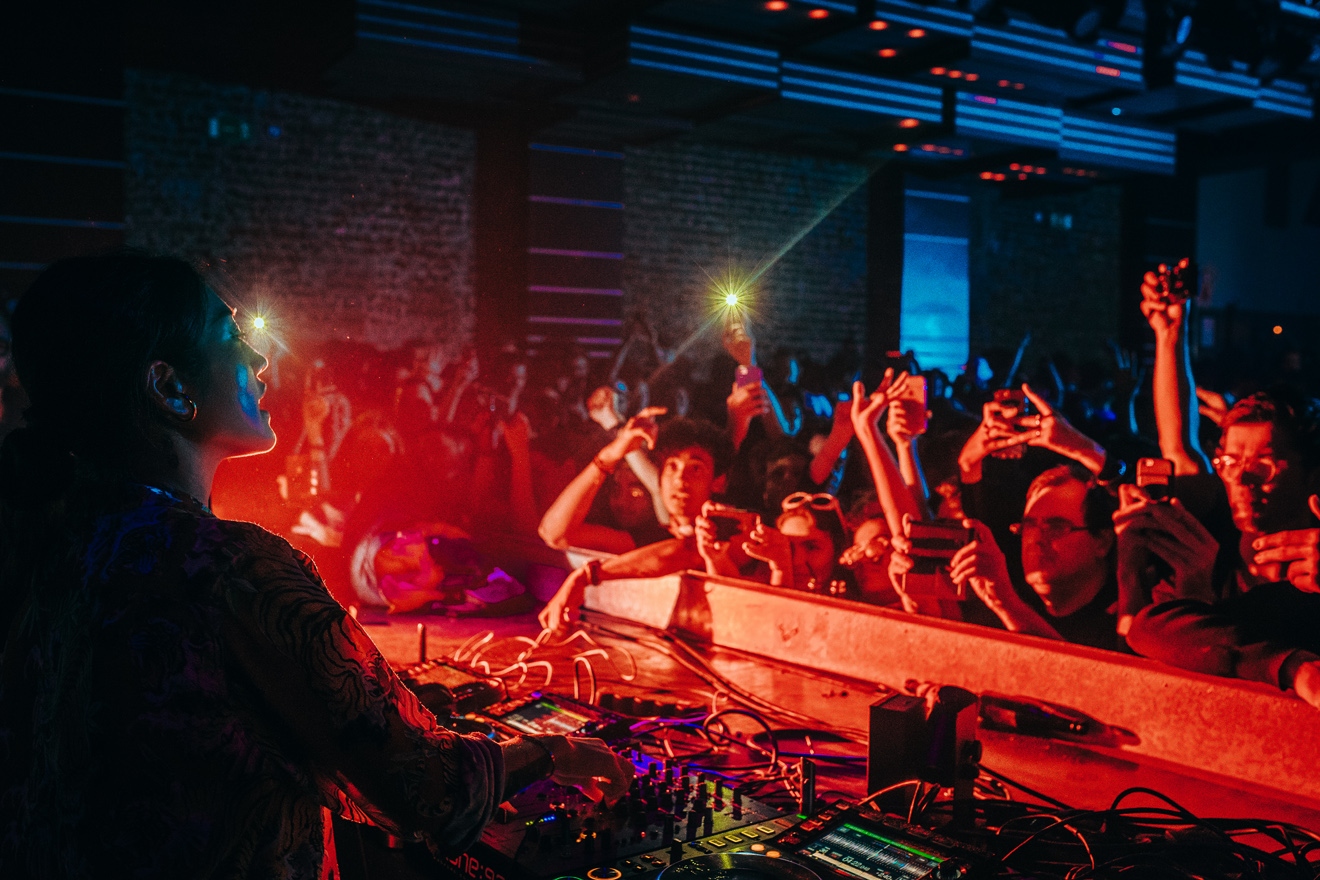 Brussels has middle child syndrome. The city is bang in the middle of London, Amsterdam, Berlin and Paris. With these house and techno capitals for siblings it’s taken a while for Brussels’ voice to be heard. “In Belgium we’re good at things, but we aren’t very open about our abilities,” Arnaud says. “So a lot of people sit on tons of amazing unreleased music. In Belgium we find it difficult to put ourselves out there.” But the opening of a new record shop in the city centre, Crevette Records, has given emerging Belgian artists the tools and confidence to release music.

“This store is probably the biggest influence on the Brussels scene right now.” Arnaud says. “Through the shop people are connecting with each other, and artists who have never released music before are finding their way through distribution and record pressing.” Arnaud makes the techno selection for the shop and is witnessing the evolution first hand. “Recently I
was listing new records and I had five Brussels techno tracks in one week from people who’d never released music before. At that moment I realised that this record shop is doing things. People are finding their way, and it’s become a community.”

This community is right here, tonight, in Fuse’s second room, holding its collective breath as Dallas-based cult hero Convextion adjusts his specs and steps up to the booth. The intelligence, depth and scope of this pioneer’s musical knowledge is best conveyed by the fact that earlier he recognised the instrumentals in the extremely quiet elevator music playing in the hotel lobby. Convextion hunches over his laptop, squinting, while the crowd crams right up against the booth dancing shoulder to shoulder to his atmospheric electro set, one moment sleek, the next chaotic, always masterful.

It’s 5:AM and Davy finishes up the party with a buoyant two-hour set, the community he helped shape surrounding him for the duration, passing each other bottles of Coke and water. And as Fuse chalks up another magical night of world class music, one thing is clear: make way, capital cities of Europe. It’s the middle child’s time to shine.