Music festivals shouldn’t just be about endlessly navigating your incoherent friends through a sea of coloured canvas, hazardous guy ropes and mountains of discarded Red Stripe cans in a vague attempt to watch one of your favourite DJs in action. Most UK festivals these days provide an alternative to music, offering spaces where you can take time out from missioning around a sodden (or arid, because, let’s face it, we do get hot weather sometimes) field. Perhaps even spaces where you can lay back and watch grown adults wilfully humiliate themselves just for fun, like by throwing themselves partially naked at other partially naked adults in a pit of mud, trussed up on bungee cords attempting to tear wax strips off each other’s hairy bodies or licking whipped cream off a stranger’s face, for example. And behind these wacky games are an ever-growing number of collectives whose sole purpose is their love of uniting people together in silliness, and possibly also watching grown humans making massive tits out of themselves.

One of the original perpetrators is East London’s Bearded Kitten. “The motto, or mantra, our games had to follow was ‘nakedness, pain or humiliation’,” Barney Sutton, one of the founders, tells us. Barney and his then partner, Dickie Cohen, started out selling balloons and playing limbo with a light rope and ‘blind date dancing’ in the back room at Rhythm Factory in Whitechapel. In 2007 they began to send out proposals to festivals, one of which was Secret Garden Party.

One of those proposals was clutched by two Barbie dolls mud-wrestling each other in a plastic fruit bowl. Of course Secret Garden Party said yes, and the preparations began. “We literally hand-dug a mud pit… it was quite wet. It took us two days,” Sutton recalls with a laugh. “We just stood around this mud pit with megaphones getting people to wrestle. I don’t think we even had music back then.”

Other attractions included the Get High High Jump (inhale poppers, get spun around 10 times and then attempt do a high jump) and Human Tetris, where if you didn’t find your correct shape in the wall, it would knock you into the mud pit below (there’s a theme here). 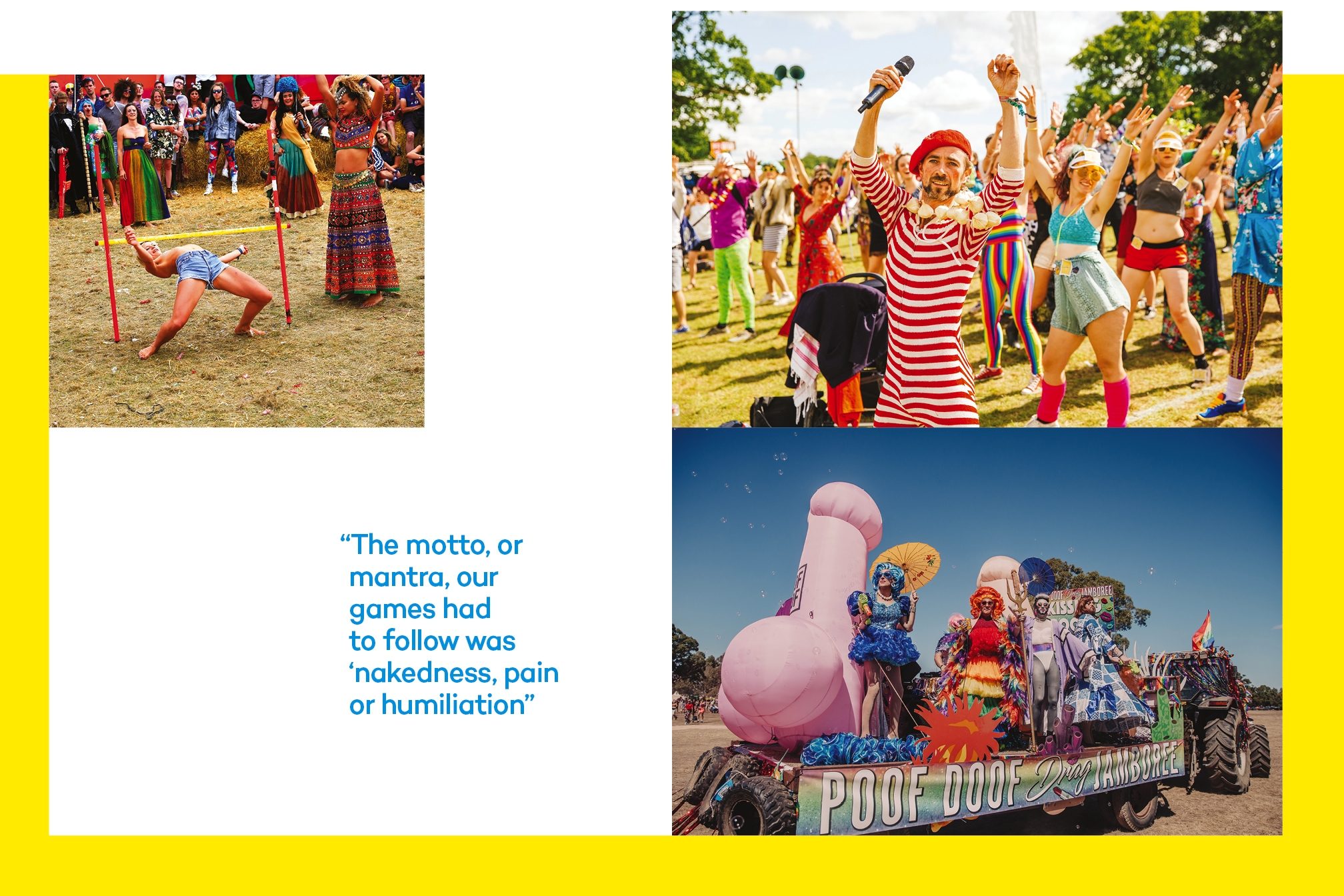 Farr Festival, July last year. At the end of a dusty path lined with fields of cabbages is an inflatable dinosaur gyrating wildly on the stage just in front of the first tent. Inside the tent is a flamboyant host named Shine, “from LA”, dressed in an 80s-inspired unitard, a dusky pink fringed wig atop her head. She’s barking commands at a row of bemused and giggling 20-somethings standing in formation attempting the moves to that classic late-90s tune by 5ive, ‘If Ya Getting’ Down’. This ‘boyband workshop’ shares the festival bill with Mr. G, Dixon, Lena Willikens, Tama Sumo and Optimo.

This is House Of Dinosaur, a four-strong collective made up of Aaron, Daisy, Jackson and Jacques. They expertly intertwine mass audience participation, workshops with a twist and theatrical performances, all the while staying in character. The foursome recently returned from the French Alps, where the idea was born three years ago at Snowboxx. They’ve taken their shenanigans to the desert for Beyond Sahara, as well as North London’s Roller World for their Robot Roller Disco, where groups of attendees were pitted against each to create the best-dressed robot (using tinfoil), and a soul train on wheels.

One of the main philosophies behind the House Of Dinosaur concept is including, embracing and nurturing talent. They have a small crew of up-and-coming DJs exploring a spectrum of genres – slow r’n’b jams to world music, to bassline and techno if they’re “feeling a bit sexy”. “We love getting people involved,” explains Jackson. “Anyone can do anything. We like to give people [performers, DJs and the audience] a chance to shine.”

On the other side of the world, Poof Doof (in Aussie slang a ‘doof-doof’ is an outdoor rave) formed after many of Melbourne’s gay clubs closed their doors. This year, they pitched up to Victoria’s Pitch festival, giant dildos in tow. Their team includes drag queens and kings, roaming circus freaks, comedians and go-go dancers. “Introducing LGBTQI+ elements and performers into the festival scene is relatively new in Australia,” explains Anthony Hocking, one of the founders. “And seeing the crowds deliver love, respect and positivity while losing their inhibitions is one of the best aspects of the Poof Doof festival takeovers.” And also, he adds with a grin, “Having drag queens vogueing on the back of a tractor in between two giant inflatable penises is pretty wild!” Back in the UK the queer clubbing and festival scene has also been receiving a fabulous shake-up.

Clayton Wright, who runs Little Gay Brother with Chester Hayes, echoes the same views as Anthony of Poof Doof. “It’s quite shocking that we’ve lost so many of our queer spaces. Even straight clubs that a lot of LGBT people go to have closed as well.” Many will remember the Little Gay Brother tent at, yep, you guessed it, Secret Garden Party, where drag queens strutted on treadmills at 5:AM in heels that anyone else would break their neck in. Some may also remember those insane Ikea-themed outfits, which were nothing short of genius. They were the first party to bring back gay clubbing to fabric on Sunday nights in 11 years, performing alongside Kim Ann Foxman and The 2 Bears. Little Gay Brother has managed to find a home at London Bridge venue, Omeara. It’s a 600-capacity venue Clayton and his cohorts use to create a different vibe in each room, much as they did with their festival tent.

The festival experience really can bring out a different side of people. Clayton recalls a time when he left the tent, assuming it was all locked up, went to bed and then returned the next day for the locals’ BBQ. Deciding to have a little peek outside, he noticed the zip to the ‘secret’ venue wasn’t fully closed. “There were kids running around and burgers being put on the barbecue,” he says. “I looked inside and there must have been fifty or sixty people having a full-on orgy. I tried to tell everyone to leave but no-one would listen. Luckily, one of our drag queens came along at the same time with a fire extinguisher and hosed everybody down and chased them all off!” 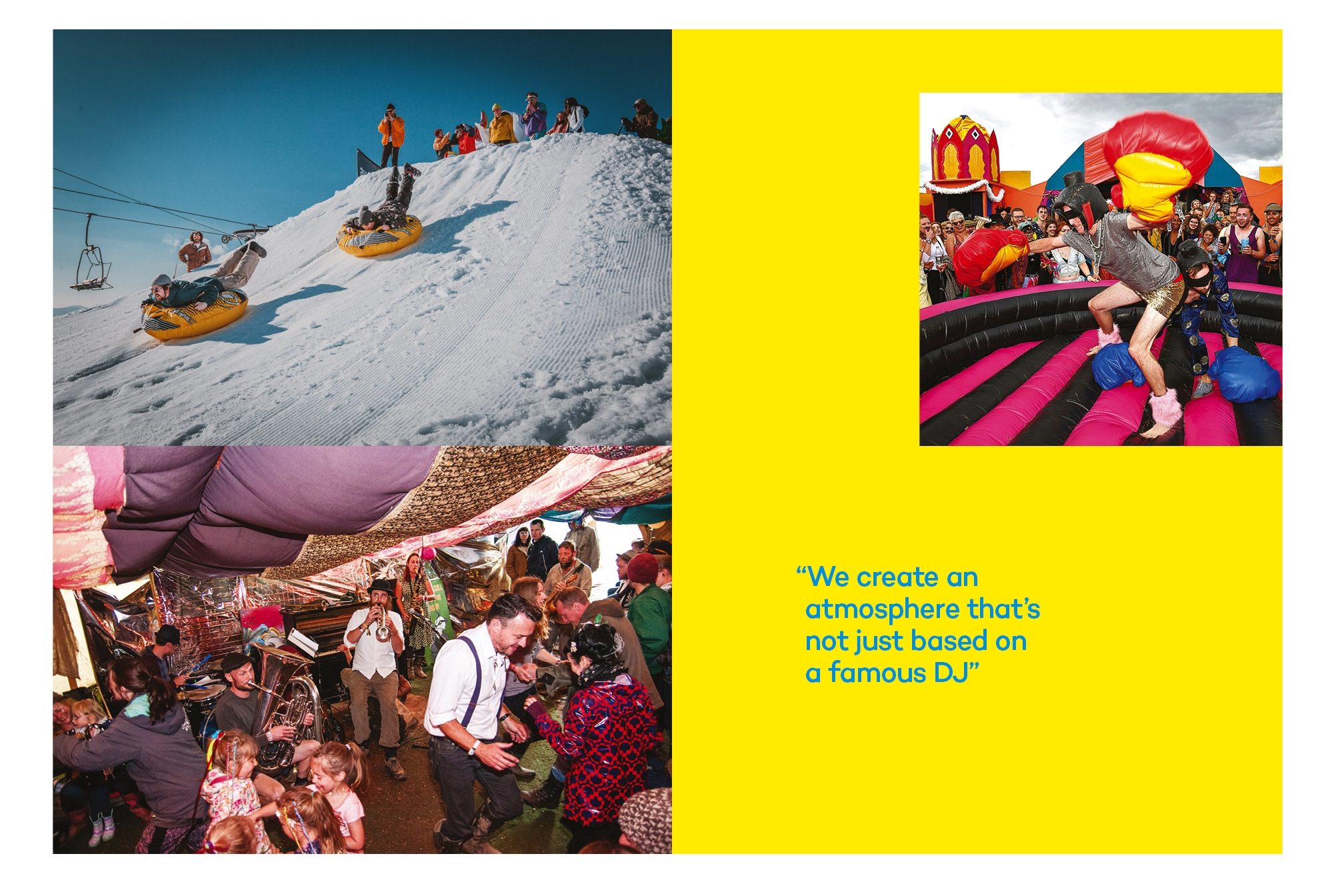 Creating unique worlds inside smaller spaces at festivals is something The Cabinet of Lost Secrets also excel in. Found only at Nozstock – a boutique summer festival in Herefordshire home to the likes of David Rodigan and Soul II Soul – they create an immersive, mind-altering experience for festivalgoers. In their inaugural year in 2015 they were shortlisted for the Association of Independent Festivals award for Most Unique Area, and after speaking to Kate Cox who co-runs the area it isn’t hard to see why. They use illusion and performance to create an ‘underground’ multi-roomed lair accessible via a tunnel, the layout of which changes each year.

There’s a garden with a DJ caravan, a main stage room and a plethora of smaller hidden venues; you just have to find them yourself. “Sometimes people are literally picking at the walls,” Kate explains. “Is it behind the mirrored maze? Is it a tunnel? Is it hidden behind a wall or under the piano?”

Surprise guests over the years have included Krafty Kuts and Jurassic 5’s Akil putting on an intimate and interactive late show for just 150 people. Their barbershop duo, The Demon Barbers of The Cabinet, not only provide music but also a quick trim if you’re in need of a festival tidy-up.

It’s this mix of theatrics and circus-style entertainment that the team behind Village Circus, which brings The Club House to Wilderness festival, pride themselves on. Willo Shaw and Alexia Tucker created The Club House together, and subsequently became a couple after two days “spent in the office in fits of laughter”. Their spectacle has now expanded to a large-scale arena that hosts an array of bizarre sporting activities including sock-wrestling and mass musical benches, as well as musical quizzes, dance bands, cabaret and comedy.

Many of the collectives bringing chaos to festivals see themselves as a release valve for the pressure of what’s going on in the wider world. “Freedom of expression and creativity are so important,” Willo says. “There’s so much to be stressed about that we think it’s important to be able to nurture our playful spirits and remind ourselves that life is meant to be fun.”

Each of the collectives reflect this. While they all bring something different to the table, there’s a clear theme that unifies them – they promote fun, inclusivity and losing your inhibitions. “We create an atmosphere that’s not just based on a famous DJ,” House of Dinosaur’s Jackson explains. “We make the festival about the individuals. They feel like they’re part of it: creating
their own experience.”