Like all the best revolutionary movements, Optimo (Espacio) know the value of a good slogan, and for 20 years they’ve added them to the minimal, fanzine-style DIY flyers and posters with which they’ve infiltrated Glasgow’s streets. ‘We love your ears’. ‘You won’t like it, sugar’. And of course, as the years went by, ‘It’s not as good as it used to be’. Optimo is a proper Glasgow club, with a dark sense of humour and an air of biting self-deprecation. It doesn’t take itself too seriously, which is one reason why 20 years’ worth of audiences love it as though it were their own child.

This anniversary celebration festival, then, is both the most hotly anticipated Glasgow party of the year, and a family reunion. It’s also the first road-test of one of the most exciting new club spaces in Scotland, the recently renovated, 1000-
capacity Galvanizers Yard plus art and venue space SWG3, a complex of studios and live rooms built into railway arches and warehouses at Finnieston’s fringes.

The large moving sign alongside the DJ booth in the main hall – itself a recreation of the cinema board behind the bar at Optimo’s first home, the Sub Club – sums up what we can expect from this Sunday all-dayer: ‘I WANNA SEE ALL MY FRIENDS AT ONCE’. “By the end of the day I’ll have hugged about twenty-five per cent of the people in this building,” says Keith ‘Twitch’ McIvor, taking an early-evening break in one of the upstairs studio spaces, with his DJing partner of 20 years, Jonnie Wilkes. Downstairs, Avalon Emerson is playing dirty, big-room electro which hammers the floor under our feet, her set later mutating into soulful, groove-laden techno. “I swear I’m not exaggerating,” Twitch continues, the heavy eyebrows which give him an air of menace in promo photos at odds with his friendly, enthusiastic voice. “There are people down there who I haven’t seen in fifteen years, they’ve come from Australia, from Miami, from Switzerland – all over. It’s been very emotional. Some I didn’t even remember, and to see them took me right back. There are people as young as twenty there, and I’ve spoken to seventy-year-olds, too.” 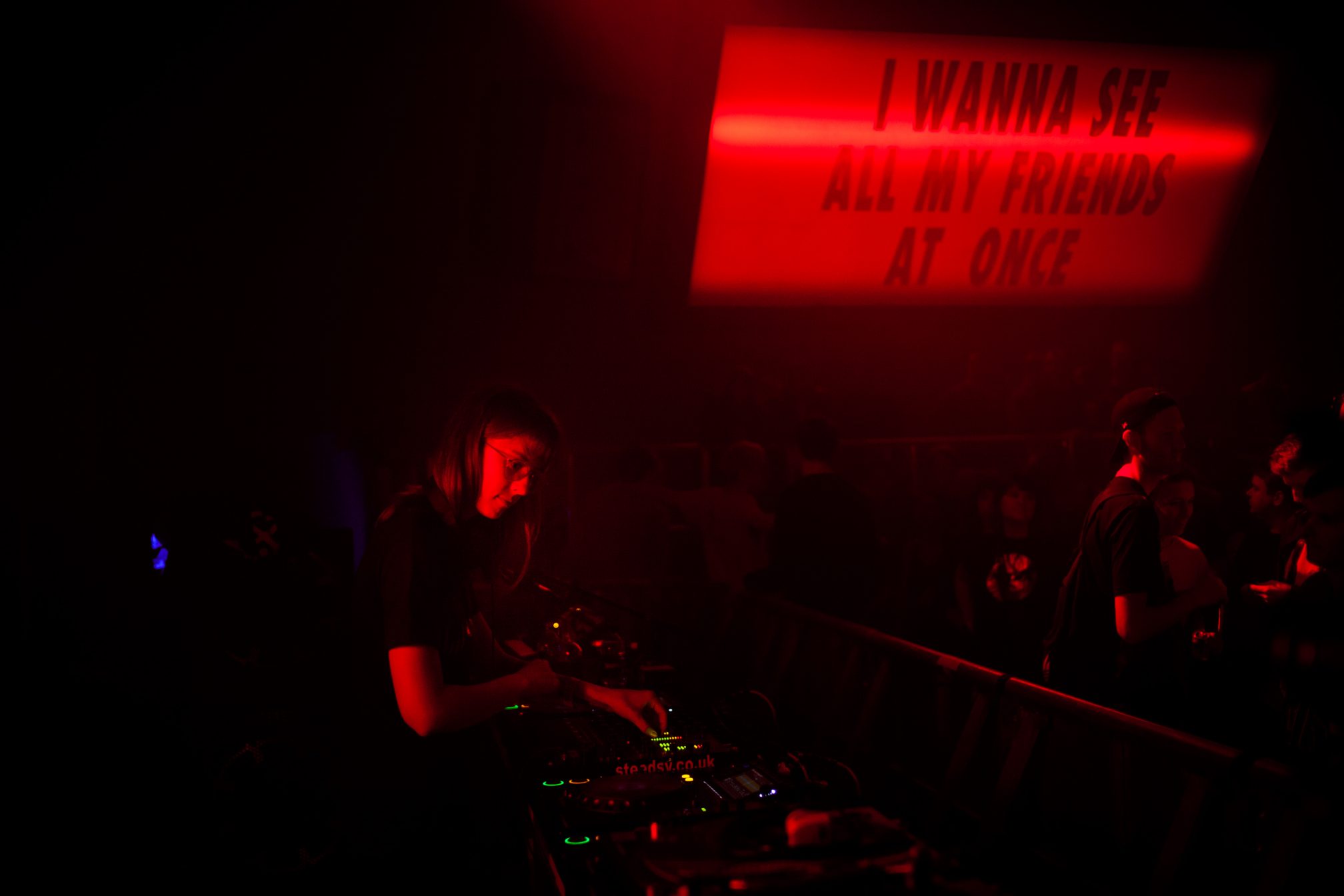 The broad Optimo mix of techno, electro, disco, post-punk, industrial, psych-rock, Afrobeat and unexpected pop classics covers the broad range of guests booked as well. Over three rooms of differing sizes, the line-up at Optimo 20 throws together artists who don’t belong on the same bill, but who Optimo make work. That’s what they’ve always done. “They played loads of cool dance music I’d never heard – then the Beatles and Led Zeppelin were suddenly on,” recalls 34-year-old regular David Sinclair of his first Optimo, in 2002.

Now, at Optimo 20, the medium-sized gig room plays host to artists you’d never expect to find at a dance festival: cataclysmic Finnish electro-rock group K-X-P, who were big Optimo favourites when they were known as Op:l Bastards; Detroit electroclash survivors Adult., marking 20 years to the day since their first gig (“we’re some old motherfuckers!”, yells Nicola Kuperus, before a ferocious performance of ‘Hand To Phone’ which disproves it); and the elemental, nod-out industrial drone-rock of Nurse With Wound, who Twitch and Wilkes are particularly excited about. While we speak upstairs, Ghanaian kologo player King Ayisoba and his band are loading in. Elsewhere, Midland is the penultimate DJ in the Galvanizers Yard, a growing sea of people gathering for Optimo’s two-and-a-half hour headline B2B set with The Black Madonna, who represents the kind of unforced, don’t-give-a-shit-who-you-are-as-long-as-you’re-here-to-dance inclusivity that’s made Optimo a safe space for women and queer crowds. Robin Dunne, 27, remembers that most un-Optimo of things: getting in a fight in the queue. “The bouncers made us kiss and make up before they let us back in.” 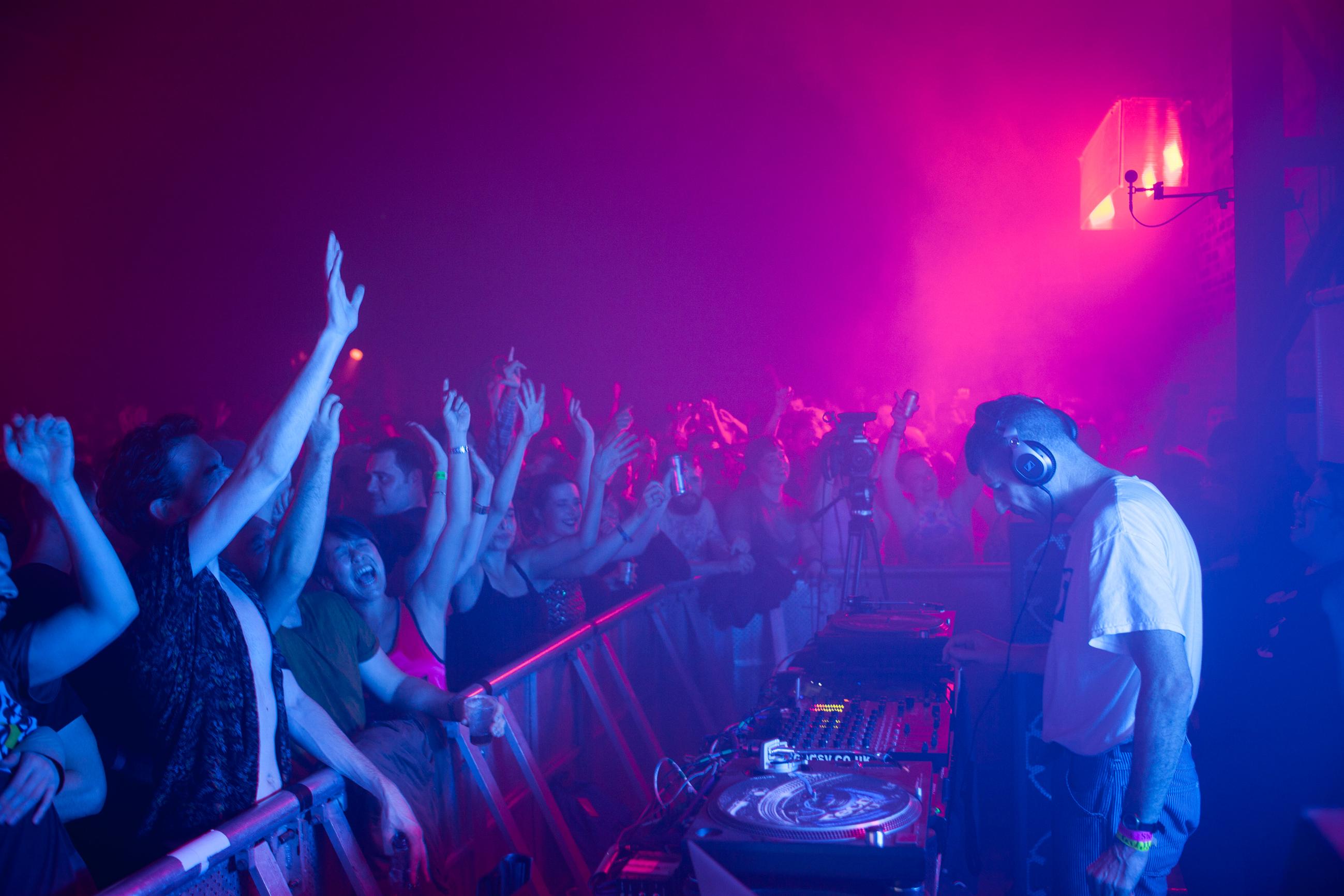 In the tiny sweatbox Poetry Club room, sets by Ben UFO and Aurora Halal are preceded by two-and-a-half ferociously good hours from Copenhagen trio Apeiron Crew, whose Emma Blake (aka Solid Blake) is from Glasgow, and an Optimo veteran. “The first time I went to Optimo in 2005 I had my school uniform in my bag for the next day,” she laughs. “I couldn’t believe I was hearing the techno I was just getting into, but also songs I knew from my childhood. I made so many good friends back then.

“They taught me how to play something unexpected and have it fit,” she continues, “and how to put on an actual party, rather than just a club night. That’s what we want to do; we want to make everything we do feel as special, and Twitch has been so interested and supportive since we started Apeiron Crew. So many artists tell me Optimo are their favourite DJs, and they can’t believe I got to experience those Sunday nights as a teenager!”

“The bouncers made us kiss and make up before they let us back in.”

It’s still light outside, but the Galvanizers Yard is pitch black and surely rattling the windows of passing trains as the headline set approaches. “After all the hard work of putting this together and getting it right, seeing all our friends and feeling the love in the air has been really overwhelming,” says Wilkes. The duo make a perfect odd-couple pairing, though neither are native Glaswegians: Twitch is from Edinburgh, where he co-founded Pure, another boundary-smashing night, in the 90s, while Wilkes moved to Glasgow from Belfast in the 1990s.

Bucking the late-90s trend for super-clubs and rock star DJs, they asked the Sub Club if they could play whatever they wanted on Sunday nights, and nobody came for the first year, until posters – designed by Wilkes – started going up around the city. “One night, we confused the very small audience of fifty by only playing versions of ‘Light My Fire’ for an hour,” says Alan Miller, aka DJ Hush who has played at other great Glasgow clubs including Divine and Death Disco and now does PR for Optimo.He has plenty of stories to tell, including the time he took a bunch of journalists (including new London Night Tsar Amy Lamé and a Men’s Health writer in a “decidedly non-healthy” condition) back to Optimo after a Grace Jones gig at Barrowlands. “Optimo is a place where everything is allowed, not ‘anything goes’,” says Miller. “That suggests chaos, and they work far harder at it than that. It’s a real community, and what keeps it fresh is the way they still engage with new talent and young artists from Glasgow. Optimo never atrophied into a static ‘brand’ when they became successful, they’ve never stood still.”

Tonight’s headline set with The Black Madonna proves every word of that statement. Few other DJs could create a set so cutting-edge and still get away with Madonna’s ‘Hung Up’ and their own edit of Bronski Beat’s ‘Small Town Boy’. “People have always struggled to define what we do,” says Twitch, “but it can’t really be summed up in words. Look at the artists we’ve put on today: every one of them is someone we personally want to hear and enjoy. If you want to know what Optimo is, it’s the music we play. And it’s a great party.”

Optimo 20 continues with international dates throughout the year, finishing with the Optimo Hogmanay Party at The Art School, Glasgow, on December 31. Full dates: www.optimo.co.uk