“Freddy Mercury was the first person ever to give me a line of cocaine,” confides Fat Tony. Then he adds: “It was amazing going out with him, but because I wasn’t a Queen fan, to me it was just a party/sex thing. I met Freddy the same night I met Marc Almond, at Heaven. Then Freddy took me to my first leather club.”

Meet Fat Tony, a pioneering house DJ when most of you were still a glint in your mum’s eye (if that), a key face on the London club scene for decades and now one of Britain’s greatest Stately Homos. And his story is one of the most remarkable in all of dance music. He’s been working as a DJ for over 35 years now – he started at just 16, when few people had aspirations in that direction and London’s club scene existed in a single Soho square mile. Social media would have been superfluous, had it been invented, since everyone went to the same places. Bezzies with Boy George and, later, Kate Moss and Naomi Campbell, Tony has been the go-to party-starter for Soho’s gilded hordes for decades. He was also notorious for his legendary capacity and appetite for drugs – which nearly destroyed him altogether.

Fat Tony (real name Tony Marnach) got his break when he blagged a set at The Lyceum (now home to The Lion King) at a night run by Visage duo Steve Strange and Rusty Egan. “I was very annoying, loud and precocious,” says Tony. “I was doing the door and every week I complained about the music. Then one week Rusty said, “If you think you can do better, you do it.” So the following week I turned up with four records, one of them by Divine, and that was it.” Within weeks he had a residency, was running a party at the Wag (Total Fashion Victim and, later, Fat) and, amazingly, a residency at The Palladium, the enormous club in New York, opened by Ian Schrager and Steve Rubell after the pair had been jailed for tax evasion while running Studio 54.

“I fucking loved it!” he says of his Palladium years. “I flew on Concorde five times – it was meant to be six but I missed a flight. Sometimes I was so out of it I never even played. But they loved that whole attitude. One time my friends met me at the airport with little bottles of MDMA and we were doing it on the way to the club. I got there, started DJing and said, ‘Listen, it’s not working – give me the bottle.’ Then I bent down and when I came back up I’d turned into the Cookie Monster, with one eye [facing] each way. So I was like, “We’ve gotta leave.” I’d played one record and left the second playing and went. The next day they rang me: ‘Oh my god your set was amazing!’ To this day I don’t know what happened or who went on after me and played an amazing set. But it wasn’t me!”

When house music arrived in its Chicago spaceship, Tony embraced it wholeheartedly. Alongside Colin Faver, he was the resident at The Jungle, London’s first dedicated house night, run by snapper Dave Swindell’s brother Steve. “It just changed my life,” he says. “That was it for me: it was the way forward. I was the first person to bring Frankie Knuckles to London.” The end of the 1980s (Dave’s photo, above, shows Tony at Shoom) and into the 90s was a golden period in London’s nightlife; Soho was still the centre of the city’s nightlife and DJs like Tony were in high demand. Fred’s, one of the first modern private members’ clubs opened, and Tony was its resident. It was the meeting place of the demi-monde, from artist Francis Bacon to designer John Galliano. “That’s where I met Kate [Moss]. She was fifteen. She used to come in her school uniform and get changed in the office. I’d give her Long Island iced teas and she’d say, ‘Ooh, it tastes just like tea!’ An hour later I’d have to put her in the office under the desk asleep on the floor.”

Read this next: Watch our documentary film on Fat Tony

Ever since he’d been DJing, Marnach’s reputation for excess was almost as well known as his abilities behind the decks, and soon the two became intertwined. He ran up a bar bill of £170,000 at one club (he ended up playing there for free to pay it back) and his capacity for drugs was even more excessive. “I used to turn the music off and say, “No K, no play!” People used to bring me drugs so I’d put the music back on. My records were covered in so much cocaine they used to crackle.” The lifestyle eventually caught up with him, though. “It got really dark. I didn’t look at a dancefloor for four years. I didn’t look anyone in the face, because I couldn’t cope. By the end, I weighed seven stone and I had one tooth and one pair of trainers. And the trainers weren’t even mine.” 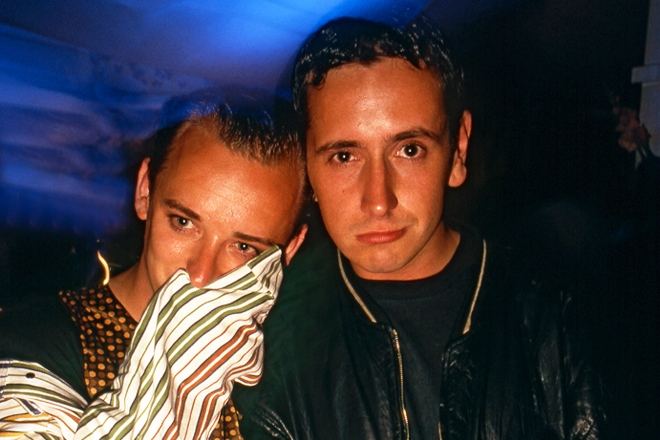 Almost twelve years ago to the day [we spoke to Tony in December 2018], he went clean, a long and arduous process that has seen him reborn (and his mouth re-fitted with teeth). Nowadays, his life couldn’t be more different: he’s as well known for his outrageous Instagram account as his DJ work. “I’ll be walking down Oxford Street and people will stop me and ask if they can take a picture. It’s not even like I’ve got five hundred thousand followers, it’s because of who I am. I’ve got everyone from Paris Hilton to David Beckham following me. I DJed at Meghan and Prince Harry’s wedding and at the end, Harry came up and said, ‘Your Instagram is the funniest ever.’”

As part of his tag-team partnership with Kate Moss (they call themselves Fat Moss), his fees are somewhere between astronomical and obscene. Recalling a party in Greece this summer, he says, “They flew us in by helicopter and landed at our villa. I was just laughing the whole time. Some of the things I get asked to do I’m like: ‘What? For an hour? I can buy a house in Manchester for that!’ Funny as fuck. But it’s amazing, because I get to do and play what I want.”

Read this next: How to have a Ibiza holiday on a budget

One of his contemporaries, the former Pet Shop Boys manager Dave Dorrell, witnessed his inexorable descent and rise at close quarters. “I think his rebirth is all the more remarkable because he is so active now – perhaps more productive than ever. And, just maybe, he’s the best Fat Tony there’s ever been – which brings a big smile to my face.”

Reflecting on his incredible life, it’s obvious sometimes that he can scarcely believe what’s happening. He chuckles to himself and says with characteristic understatement, “Yeah, life has got a lot better.” And with that the Comeback Kid heads to another appointment in his busy, busy life.