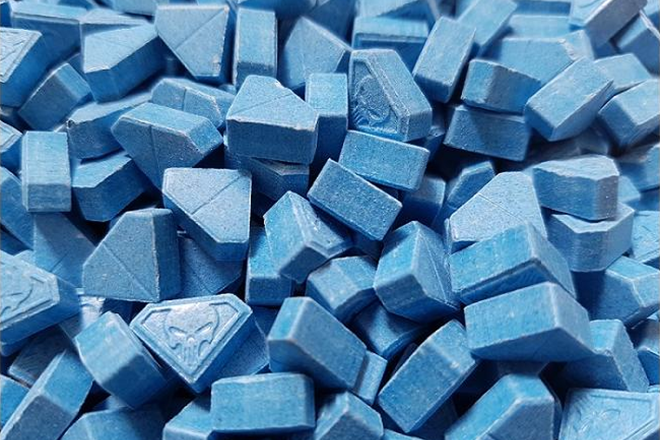 Dorset Police have issued a warning about blue ecstasy pills pressed with the skull face of Marvel film The Punisher.

The South Western Ambulance Service told the police that two people had to be treated in Bournemouth after suffering "serious side-effects", according to Wessex FM.

It's said one of those treated experienced convulsions and psychosis, while the other was vomiting. They were both treated in hospital.

One report of the diamond-shaped pills said they have a "strong aniseed/chemical smell". One user on Reddit stated the pills contain 250 to 300mg of MDMA, which is a very high dosage.

Detective Inspector Scott Johnson, of Bournemouth CID, said: "We would strongly advise people thinking of taking substances such as this to think again and want to make them aware of this particular batch of drugs.

"You can never be sure what you are taking when you use illegal substances and the side-effects are unpredictable and potentially life-threatening.

"If anyone has any information with regards to the sale of illegal drugs please contact police to report it."

Councillor David Smith of Bournemouth is calling for people to refrain from taking this certain batch of pills.

"Clearly, there is a drug pusher, or a team of dealers, operating in the area and selling this specific drug.

"I'd always encourage people not to take any illegal substances. Often, you won't know what you're taking. I'd also ask for anyone who knows something about this to call police.

"If you see these pills on a night out, tell security staff about it straight away."

There was a also a batch of blue Tesla's doing the rounds in Northumbria and were said to contain cocaine and meth.